Antibiotics are meant to kill bacteria, so it might be disheartening to learn that some bacteria can literally eat antibiotics for breakfast. In fact, some species can thrive quite happily on nothing but antibiotics, even at high concentrations. 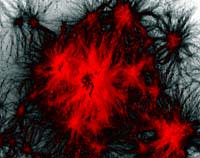 The rise of drug-resistant bacteria poses a significant threat to public health and many dangerous bugs seem to be developing resistance at an alarming rate. The headline-grabbing MRSA may be getting piggybacks from livestock to humans, while several strains of tuberculosis are virtually untreatable by standard drugs.

But a startling new study reveals just how widespread antibiotic resistance really is. Gautam Dantas from Harvard Medical School managed to culture antibiotic-eating bacteria from every one of 11 soil samples, taken from farmland and urban areas across the US. All eleven werepositively loaded with a diverse group of bacteria that were extremely resistant to a wide range of antibiotics at high concentrations.

In their natural environment, these soil bacteria are frequently exposed to a massive array of antibiotics from plants and other microbes, and have evolved ways of detecting and evading them. These resistant strains act as a living reservoir of innovative genetic means of resisting antibiotics, known as the 'antibiotic resistome'.

Dantas searched for resistant bacteria by culturing colonies that could grow in solutions where antibiotics were their only source of carbon. He tested 18 different antibiotics that are used to kill a variety of different bacterial species. Some of these were natural, others man-made; some were old, others new. But every single one managed to support at least one strain of bacteria. Six of them, including commonly used drugs like penicillin, vancomycin, ciprofloxacin and carbenicillin, even managed to feed bacteria from all 11 soils.

The degree of resistance in the soil bacteria was nothing short of extraordinary. Dantas cultured a representative set of 75 resistant strains and found that on average, they resisted 17 of the 18 antibiotics at low concentrations of 20 milligrams per litre (full bars in image below). But even at higher concentrations of 1 gram per litre (filled bars in image below), each strain managed to stand firm against an average of 14 out of 18 drugs.

When Dantas studied some of these strains more closely, he found that they nullified the drugs using similar techniques to the drug-resistant versions of disease-causing bacteria. Some shunted the antibiotics out of their cells with molecular pumps, others used enzymes to cut up the drugs, and yet others reprogrammed their own genetic code to deprive antibiotics of their targets.

The real danger is that the soil-living species could provide new defences that more dangerous ones can draw on to shrug off our best drugs. Bacteria are capable of passing genetic material between one another as easily as two humans might swap business cards, making it trivial for the soil super-bugs to pass their crucial genes on to more dangerous species. To see how easily this could happen, have a look at this earlier post about how the food poisoning bug Salmonella has passed a resistance gene on to the Black Death bacterium.

In principle, bacteria should be more able to successfully take up resistance genes from other closely related species. It's worrying then that Dantas's antibiotic-eaters belonged to such diverse groups. By establishing a family tree of the different strains, he found that they were members of at least 11 different bacterial groups, although over half of them came from just two orders - the Burkholderiales and the Pseudomonadales. These include a wide variety of species that are known to infect hospital patients with weakened immune systems.

They are known for their large genome sizes (well, large for bacteria anyway) and some groups have suggested that these sizeable genomes allow them to metabolise a wide range of chemicals, antibiotics included. This unusual diet will come as no surprise to many a microbiologist. Bacteria can colonise some of the most extreme environments on the planet and can survive on the most unlikely to food sources, from crude oil to toxic waste. Now, it seems that they can also survive solely on chemicals that are meant to kill them.