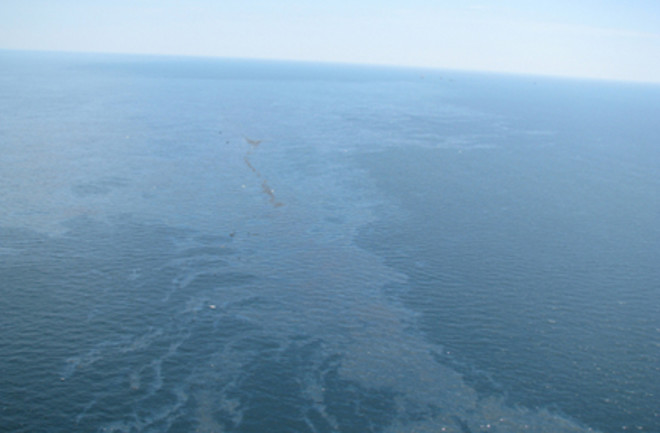 When we last reported on the Deepwater Horizon, the oil rig had sunk in the Gulf of Mexico, but at least the Coast Guard saw no new oil leakage happening. Over the weekend, though, things went from bad to worse as response teams began to see crude oil leaking into the Gulf. Now, the Coast Guard says, 42,000 gallons per day are leaking into the sea, and it may be 45 to 90 days before the leak can be stopped. Deepwater Horizon, under lease by BP, had been drilling into an oil reserve 5,000 feet below the surface of the water.

When the burning rig sank, its 5,000-foot pipeline crumbled like a giant broken straw. The biggest leak has been found at the first crook. The well valve is holding for now but there's at least one more leak [ABC News]

. The Coast Guard couldn't see the oil so deep under sea right away, which is why the initial assessment wasn't this bad. Cleanup teams have now deployed undersea robots to try to stem the oil spill.

The best hope is that the remote-operated submarines—at least four are deployed at the scene--would be able to activate a huge device on the sea floor called a “blow-out protector,” a series of valves meant to control pressure in the well. “This is a highly complex operation,” said Doug Suttles, chief operating officer for BP’s exploration and production division. “And it may not be successful” [National Geographic]

. If that doesn't work, the next option would be to drill a relief well to ease the pressure. BP has brought in ships for such an operation, but it would require months to complete. As we noted on Friday, the spill occurred dangerously close to the United States' Gulf Coast—within 50 miles.

. But as of yesterday, the surface spill had already spread to cover 600 square miles. Whether it gets closer to U.S. shores depends on how the weather changes. Louisiana is already taking precautions, deploying containment booms around particularly sensitive areas along its coast. The oil spill is reportedly edging closer to the Chandeleur Islands, which are part of a wildlife refuge for pelicans and other seabirds; the fish and shrimp that live in Louisiana's rich coastal ecosystems could also be threatened. Related Content: 80beats: Ships Race To Contain the Gulf of Mexico Oil Spill 80beats: Obama Proposes Oil & Gas Drilling in Vast Swaths of U.S. Waters 80beats: 21 Years After Spill, Exxon Valdez Oil Is *Still* Stuck in Alaska’s Beaches 80beats: 20 Years After Valdez Spill, Eagles Are Healthy; 7 Other Species Still Hurting 80beats: “Nanosponge” Could Soak Up Oil SpillsImage: United States Coast Guard