Studying the Footprints of Human Ancestors 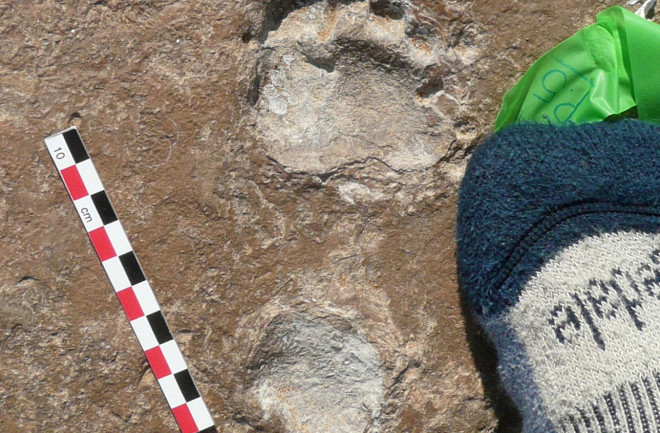 A researcher's socked foot provides scale for a child's footprint, made 1,500 years ago in Namibia. (Credit: Courtesy Matthew Bennett)

At Walvis Bay in Namibia, a scouring wind pushes sand dunes across an ancient mud flat. Sometimes when the dunes shift, the tracks of long-gone people and animals are exposed — much to the delight of Matthew Bennett, an ichnologist at Bournemouth University in England.

Ichnologists study tracks and traces and other signs of living creatures, including the footprints left by our human and pre-human ancestors. As rare and prized as hominin bones in the fossil record, footprints evoke a different response.

“A track is extremely emotive,” says Bennett. “If you see an ancient footprint, you are automatically drawn to it.” Indeed, at Walvis Bay the tracks emerge from the landscape as if they were just created. “One of the sites has [the tracks of] very small children in it,” he adds, “and there’s little doubt that they’re playing.”

The Namibian tracks are only about 1,500 years old. Africa has footprint sites that are far older, the oldest and most famous being Laetoli in northern Tanzania. Some 3.6 million years ago, three or possibly four individuals, probably Australopithecus afarensis, a predecessor of our Homo line, walked across a rain-spattered plain of volcanic ash that hardened soon afterward. More ash fell, and over eons it was compressed into a soft rock known as tuff. Erosion eventually exposed part of the roughly 80-foot-long trackway, and, beginning in 1978, archaeologists working with paleoanthropologist Mary Leakey excavated the rest.

The prints are “fossilized locomotion,” says Bennett. “They capture a lot more than is possible by simply looking at a collection of foot bones. The foot is a wonderful machine made possible by the soft tissue that wraps those bones. Footprints help you understand the whole item, not just the skeletal parts.”

After studying casts of the Laetoli prints for decades, scientists decided that A. afarensis, though a primitive hominin, walked with a surprisingly modern gait that was not like an ape’s. Bipedalism, in other words, evolved earlier than believed.

That theory is now being re-examined, however, by new analyses of the footprints using photogrammetry, which renders three-dimensional digital images. The photographer takes a series of pictures of the original footprints from different vantage points. The camera captures the depth, length and width of the impressions from all angles. A computer then integrates the images. Unlike the wet blotches you make stepping out of the shower, three-dimensional footprints show where force is being applied as the foot carries through the step.

Kevin Hatala of the Max Planck Institute of Evolutionary Anthropology, and a postdoctoral researcher at the Center for the Advanced Study of Human Paleobiology at George Washington University, recently analyzed one set of prints at Laetoli using photogrammetry. He and his colleagues at the American Museum of Natural History and Stony Brook University compared the track with footprints made by the area’s present-day residents, who don’t wear shoes. Their findings challenge the consensus that the Laetoli gait is fully humanlike.

“We wouldn’t necessarily say that [the tracks] looked apelike,” he says. “If you saw the maker of the Laetoli prints walking alongside a modern human, you might not notice any dramatic differences. But with careful observation, you could probably pick up distinctions in the ways they moved.”

Photogrammetry not only has provided new data to interpret and debate, but also a means of site preservation. Bennett and other ichnologists have called for the “digital rescue” of ancient track sites. The footprints face destructive forces from the moment they’re uncovered, such as weathering, erosion and disruption by humans or animals. Working with the host countries, scientists have tried to protect sites by covering them after study. Laetoli, for instance, has been exposed to view only twice since the prints were excavated.

Hominin tracks at Laetoli, in Tanzania, were made about 3.6 million years ago (left). Computer models of the ancient footprints can be compared with that of a modern human to study gait (right). (Credits: Left, John Reader/Science Source; Right, M. Bennett Et Al. J. R. Soc. Interface 2012 9 707-719)

The Race to Preserve

About 500 miles north, at the Ileret site near Lake Turkana in Kenya, Hatala and colleagues are studying another set of prints. Here, about 1.5 million years ago, several hominins — possibly a hunting party of Homo erectus males — left their prints amid a welter of animal tracks. The site is on a slope that crumbles easily. The researchers have covered the tracks with a plastic tarp and put supports in the slope, but the prints are still at risk. Future study of them, however, is not. Thanks to photogrammetry, Hatala says, “we have the whole three-dimensional re-creation of what the site looked like as soon as we excavated it. Years from now, if the site isn’t there, people can access those data.”

Not every site is so fortunate. In 2013, at Happisburgh on the eastern coast of England, wave action revealed human footprints on a tidal mud flat beside an eroding cliff. Layers of sediments in the immediate area already had been dated, allowing researchers to estimate the impressions were between 800,000 and 1 million years old — the oldest footprints of a Homo species outside of Africa.

After calculating height and weight projections drawn from the impressions, as well as studying flint tools and other artifacts previously found nearby, the team believes the tracks were made by a small group of adult and juvenile members of the species Homo antecessor, known mostly from a handful of fossils in Spain. Unfortunately, the tides obliterated the prints in less than a month, before they could be fully documented for future analysis. “The rarity of such evidence is equaled only by its fragility,” the researchers wrote wistfully in a 2014 study published in the online journal PLOS One.

But the silver lining in ephemeral sites such as Happisburgh and Walvis Bay is that the forces erasing them simultaneously produce fresh discoveries. “At these sort of sites, you want the cliffs to erode because you want to keep new fossils being uncovered,” Bennett notes.

And like so much else, ancient footprints, whether destroyed or reburied for safety, can live forever on a computer.

[This article originally appeared in print as "First Impressions."]