Studying Ancient Viruses Could Save Humans From Modern Diseases

A surge of research into ancient killers may help us outsmart them in the future. 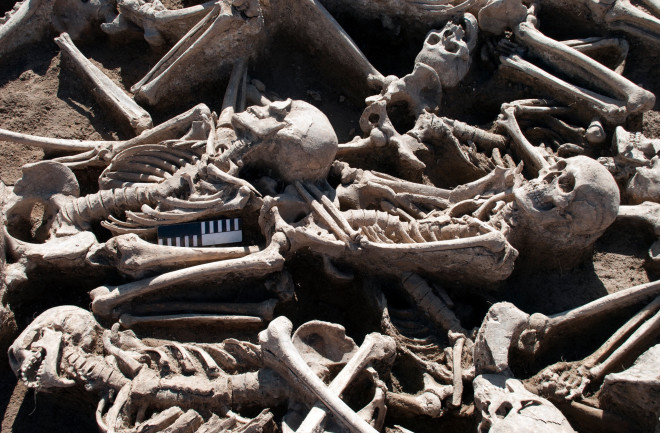 Key developments allowed the current flood of research into ancient pathogens: Powerful new data-crunching software and many more ancient genomes available for study, such as from these 4,500-year-old skeletons in Mongolia which contained the hepatitis B virus. (Credit: Alexey A. Kovalev)

The deadliest and most devastating opponents our species has faced have never been across a battlefield. They’ve been on our skin and in our blood and bones.

Viruses and bacteria have killed or debilitated millions during the course of human history — and well before. Researchers have unraveled the story of a few, most notably the bacterium Yersinia pestis, which causes plague. But findings about the origins and evolution of other scourges, including leprosy, hepatitis B and syphilis, have been elusive or contradictory.

Now, two key advances — a surge in ancient DNA samples and powerful computer programs to process the data — are allowing scientists to study disease-causing bacteria and viruses like never before.

“There were very few ancient human virus samples even six months ago,” says Terry Jones, a computational biologist at the University of Cambridge. “In terms of being ‘ancient,’ 300 years was considered old, and that was only two or three samples. Now we’re finding viruses up to 7,000 years old. … We’ve gone from zero to this almost out of the blue.”

Jones and fellow Cambridge computational biologist Barbara Mühlemann were key members of a team that published the oldest known genome of the hepatitis B virus (HBV) in Nature in May. The roughly 4,500-year-old sample was one of a dozen ancient HBV genomes found as the researchers sifted through one of the largest databases of ancient human DNA ever assembled.

A partial skull from a 7,000-year-old site in Karsdorf, Germany, provided DNA from the hepatitis B virus, the oldest sample ever obtained. (Credit: Nicole Nicklisch)

Mühlemann, a co-lead author of the paper, says advances are being made not just in how far back researchers can find ancient pathogens, but in how many they’re finding: “Where before we saw maybe one genome sequenced, now we see three, or 10, or 12.”

The reign of Jones and Mühlemann’s HBV genome as world’s oldest was short-lived: That same week, in the online journal eLife, a separate team reported additional HBV genomes up to 7,000 years old, including now-extinct strains previously unknown to science.

Needles In A Haystack

Hunting ancient pathogens is a recent offshoot of paleogenetics, which focuses on the extraction and sequencing of ancient DNA (aDNA) from animals, including humans, and plants. The primary challenges of working with aDNA from these macroorganisms are degradation — genetic material breaks down over time — and contamination.

Paleogeneticists interested in sequencing human aDNA, for example, will extract a sample from human remains, filter out both modern and non-human genetic material — generally the result of microbial contamination — and look at what’s left. The ancient pathogen hunters, on the other hand, will take that same sample and try to identify every single fragment of genetic code.

That’s where things get chaotic. Researchers estimate that there may be up to a trillion species of bacteria and closely related archaea, compared with about 8 million species combined of plants, animals, fungi and algae. To complicate matters, bacteria in particular are notorious for horizontal gene transfer: picking up bits of DNA from other organisms and integrating it into their own. Then there are viruses, some of which carry their genetic code in DNA, and others in RNA, complicating identification.

“We don’t choose what to study. We look at the data and see what comes out,” says Jones. “It may be genetic material from the host, or a parasite, or bacteria, or another virus, or DNA from the food they ate the day before they died, or even from something they came into contact with.”

Researchers estimate that there may be up to a trillion species of bacteria and closely related archaea, compared with about 8 million species combined of plants, animals, fungi and algae.

Powerful new software tools can sort through all the ancient genetic fragments in a sample and match them to millions of sequences from organisms across a broad spectrum of biodiversity.

Limits remain, however. Viruses in particular are wily targets. Blood-borne HBV, for example, lingers in an individual, including their bones, for years. But many other viruses cause acute infections, fatal or otherwise, without leaving a trace of their presence behind.

“The number of viruses you can expect to find in ancient human DNA samples is not very large,” Jones says.

The ancient genome from this a partial jaw from Germany contained the hepatitis B virus. (Credit: Ben Krause-Kyora et al. 2018 eLife)

Bacteria, however, can be easier to find. Some bacterial diseases, such as leprosy and syphilis, can leave distinctive marks on victims’ bones. Mycobacterium leprae, which causes leprosy, damages peripheral nerves, reducing sensation. Over time, this leads to increased risk of injuries and infections that cause localized cell death. Bones, especially of the extremities, appear to dissolve. Syphilis, one of a handful of diseases caused by the bacterium Treponema pallidum, leads to inflammation of the connective tissues surrounding bones and can cause bone lesions.

In June, University of Zurich paleogeneticist Verena Schuenemann and colleagues published three T. pallidum genomes after sampling human remains with bone lesions. The genetic material may not seem ancient — the individuals were buried in a 17th-century Mexico City cemetery — but they are the oldest T. pallidum genomes known, and the first to be sequenced from archaeological material, a feat researchers in an earlier study considered “not possible.” Schuenemann credits a new program called MALT that can process hundreds of millions of genetic sequences in a few hours.

Paleogeneticist Verena Schuenemann (pictured) and colleagues typically examine bones for signs of disease to determine which are most likely to retain traces of certain pathogens. (Credit: Johannes Krause)

In 2005, an early attempt to understand the evolution of M. leprae concluded that the pathogen most likely arose in the Middle East or Eastern Africa, with only a few strains making it to Europe. But the newly published ancient genomes reveal almost all of the major strains of the bacterium were present in Europe.

“The evolutionary history of M. leprae is much more complex than previously thought to be,” says Schuenemann. “Already in [medieval] Europe we find a much higher diversity than assumed.”

In fact, the newest findings hint that M. leprae may have originated in Western Eurasia, perhaps Europe itself.

Ideas about the origins of syphilis are also up for revision. It’s often been called a New World disease, thought to have spread globally only after widespread European contact with Native Americans. But there’s some inconclusive skeletal evidence that syphilis and related diseases have been present worldwide for millennia. The three new T. pallidum genomes are too few to answer the question definitively, but they are valuable puzzle pieces researchers will be able to use, one day, to see the big picture.

Likewise, a Current Biology study published in July described the earliest evidence of Salmonella enterica, which causes deadly enteric fever, in northern Europe. The bacterium was found in the bones and teeth of a young woman who died about 800 years ago in Norway. What’s surprising is that the particular variety found is rare today in Europe and North America; it’s much more common in Asia and Africa. A bacterium of the same type was also identified in 16th-century victims in Mexico, according to a January study in Nature Ecology & Evolution.

Combined, the data allowed researchers to dig deep into S. enterica’s past, something that was previously impossible to do because only modern genomes of the pathogen were available for study. Their conclusions: The bacterium was once much more widespread globally and thousands of years older than thought — and may have jumped to humans through contact with early domesticated pigs.

Different subspecies of Treponema pallidum cause syphilis and other treponemal diseases. Researchers long thought it impossible to find the bacterium in archaeological remains due to DNA degradation. (Credit: Science Source)

Similar recent studies on lesser-known pathogens are redefining our shared histories. Jones and Mühlemann collaborated with colleagues on a study published in July in PNAS that used aDNA to change our understanding of human parvovirus B19 (B19V). The virus causes a common, mild childhood disease but can have more serious consequences in adults. Previous research based on modern strains suggested B19V arose in the early 1900s, but the PNAS study found it in human remains that were up to 6,900 years old.

Just how far back will ancient pathogen hunters find their quarry?

“The general assumption for the survival of aDNA is 1 million years,” says Schuenemann, who adds that some microbes are more likely than others to be preserved. “I actually have hope to find very old M. leprae DNA; it has a very thick additional cell wall layer that seems to also protect its DNA.”

While the chronological cutoff point for finding genetic material from ancient pathogens is still unknown, each new genome found offers hints about an even deeper past.

The three ancient HBV genomes presented in the eLife study earlier this year, for example, are more closely related to strains that still infect non-human primates in Africa than they are to modern strains. That could bolster a theory that the virus may have found its first human hosts on that continent. Jones believes it’s even possible that HBV was present in species ancestral to our own.

“What’s the chance of it not infecting an earlier species?” he asks. “The virus has been around for hundreds of millions of years. We’ve just started to open the window to see what the truth is, but we’re nowhere near the bottom of it.”

The new research is not just about hindsight. Nearly a million people die each year from complications of hepatitis B infection, and leprosy still infects more than 200,000 people annually. Syphilis is considered a re-emerging global public health threat, with about 6 million new cases each year.

“Working on ancient pathogens has implications for modern-day pathogens: Understanding the evolution of a bacterium, its past spread and diversity leads to a better knowledge of how this bacterium changed over time and adapted to environmental changes,” Schuenemann says.

And thanks to gene transfer and other quirks of evolution, bacteria and viruses are especially wily at adapting.

“Fossilized animals that are extinct are not coming back, but in the case of viruses, they can come back,” says Jones. “Parts of them can come back. You’ll never see, for example, an elephant with a mammoth head, but that can happen with viruses. When we study the past, we know what may happen in the future. It gives us a way to anticipate future changes.”

[This article originally appeared in print as "Know Your Enemy."]