Study: Velociraptor’s Cousin Had a Venomous Bite and Saber-Teeth 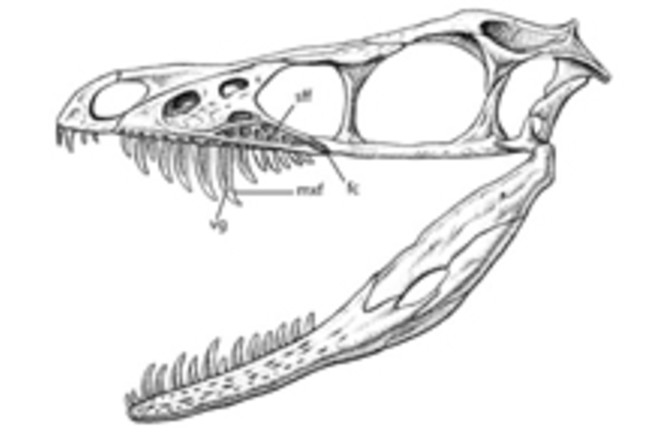 Earlier this month DISCOVER covered the 213-million-year-old fossils of the theropod Tawa hallae, a dinosaur ancestor that could show how early dinos spread around the world. Now, in a study (in press) in the Proceedings of the National Academy of Sciences, another research team has uncovered a surprise in the bones of a theropod from almost 100 million years later. By that time, these creatures may have adopted a clever new weapon: venom. Sinornithosaurus lived 125 million years ago in what's now China, and while it might have been covered in feathers (and the size of a turkey), the researchers say it attacked like modern rear-fanged snakes.

Rear-fanged snakes don't inject venom. Instead, the toxin flows down a telltale groove in a fang's surface and into the bite wound, inducing a state of shock [National Geographic]

. Looking at the dinosaur's skull, study author David Burnham says his team found a pocket that they believe

could have used to store venom. A groove runs from there to the base of the fang, the team says.

Like rear-fanged snakes, the venom Sinornithosaurus used was probably not lethal. The researchers suggest it instead caused rapid shock, allowing the dinosaur to subdue its prey [BBC News]

. Today's komodo dragons may use a similar blast of venom to weaken their targets. Burnham says the dinosaur probably ate the birds that lived in the forests of that time and place.

Short front teeth were probably used “to pluck the feathers off their victims,” wrote the researchers, who suggest that other members of Sinornithosaurus‘ family, including the velociraptors of Jurassic Park fame, had the same venomous capabilities [Wired.com]