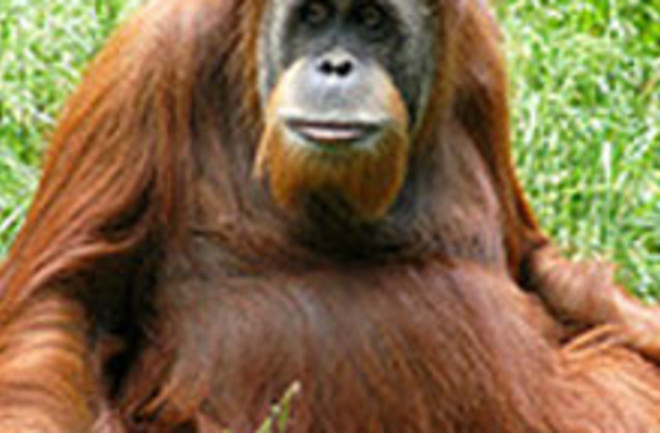 Using the first known animal instruments, orangutans use leaves to make their voices sound deeper, perhaps thereby tricking predators into thinking the apes are bigger than they really are, according to a study published in the journal Proceedings of the Royal Society B. Orangutans produce a noise known as "kiss squeaks" to let predators like snakes and leopards know that they've been spotted, and can use their lips and fingers or folded leaves to make the sound. To find out more about why the animals produce the noise,

researchers recorded kiss squeaks between 2003 and 2005 near a research station ... on the island of Borneo. The team noted whether the sounds had been made with hands, leaves, or lips alone [National Geographic News]. They found that squeaks made using only the lips had a higher pitch than those produced using hands, and that leaf-produced pitches had the lowest frequency and therefore the deepest sound.

Because using the leaves to produce the "kiss squeaks" produced the lowest sounds, scientists postulate that the animals employ the leaves to give the illusion of being larger, and therefore a more difficult target for predators. Additionally, the animals that were least accustomed to being in the presence of humans--another orangutan predator--used leaves much more often when the research team was around than the orangutans that were used to being around humans. Therefore, scientists think the animals make the leaf-produced calls when they feel most threatened.

"It looks like orangutans try to deceive the predator when using the kiss squeaks on leaves, because orangutans only use it when they're highly distressed" [New Scientist],

"This study clearly indicates that the abilities of great ape communication have been traditionally undervalued and that there may be traces of language precursors in our closest relatives, the great apes." She added that the findings suggest that primate calling behaviour is not purely based on instinct, but instead is socially learned [BBC News].