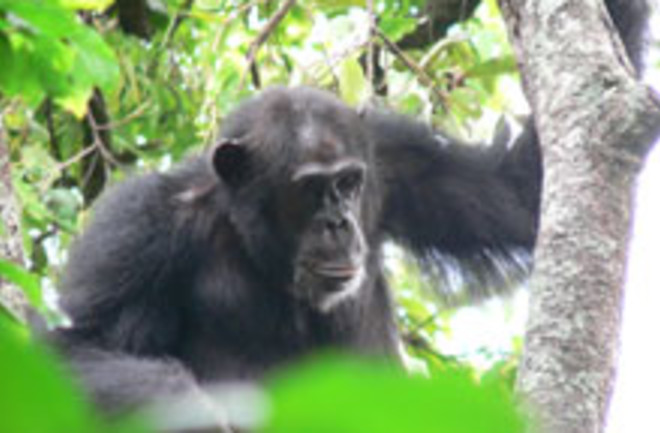 Scientists have long known that chimpanzees and other nonhuman primates can become infected with simian immunodeficiency virus, or SIV, a variant of HIV. It was thought, however, that only Asian macaque monkeys could die from the infection. But a new study published in Nature contradicts this assumption by finding that the virus can also be deadly to chimpanzees, humans' closest relatives. Some wild primates appear to have developed a way to keep SIV from becoming deadly, and scientists had hoped that studying chimpanzees could reveal how this mechanism works, possibly opening to the door to a human remedy. The new

results suggest that it will not be possible to find the key to HIV immunity in the chimpanzee genome, as scientists had hoped. However, the study... sets the stage for researchers to gain insight into how HIV and SIV cause disease in their hosts by studying the responses of different primates to the viruses [Nature News].

For the study, researchers observed hundreds of wild chimps in three communities in Tanzania, collecting and analyzing fecal and urine samples. The findings were significant:

When the scientists performed necropsies on deceased animals, they found symptoms very similar to those typical of end-stage AIDS. Analyses of the spleens and some lymph nodes of some of the chimps showed that in infected individuals, much of the infection-fighting white blood cells were depleted... One female who died within three years of becoming [SIV-]positive also had several abscesses in her abdomen from nematode infection and her skeletal muscle had wasted away, findings consistent with end-stage AIDS

Scientists plan to further research how HIV relates to its precursor, SIV, which leapt between the species sometime in the last century, along with how chimps may have somewhat adapted to the infection. “We cannot date exactly when chimpanzees first got infected, but we certainly suspect that it was much, much longer than 100 years ago,” [lead author Beatrice] Hahn said. “Our gut feeling is that the chimp virus infection is not quite as” damaging as H.I.V.-1 is in humans.

The difference in the way the virus damages tissue, she said, “leads us to speculate that chimps may be one step ahead in adapting to the virus, and identifying that step would be important” [The New York Times].

Related Content: The Loom: AIDS and the Virtues of Slow-Cooked Science has more on these findings 80beats: Step Towards an AIDS Vaccine? Monkey Muscles Produce HIV-Fighting Proteins 80beats: More Than Two Years Later, HIV Vaccine Mystery Remains Unsolved 80beats: Monkeys Are Infected With HIV in the Name of Science Image: Michael L. Wilson. One of the SIV-infected chimps.