Along the way, the sand and dust streamed across the Canary Islands, causing chaos. 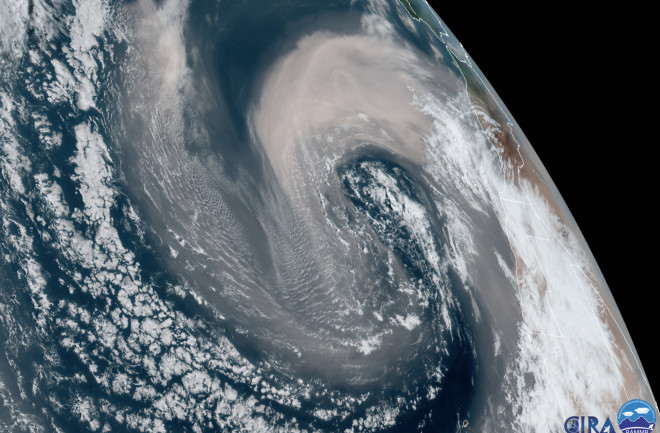 As seen by the GOES-16 satellite, Saharan dust spirals within the circulation of a large storm system in the northeastern Atlantic Ocean on Feb. 24, 2020. (Credit: RAMMB/CIRA SLIDER)

It began last Saturday — a dense plume of dust and sand blowing from the Sahara Desert and out over Atlantic.

The sky over Spain’s Canary Islands soon turned from blue to tan — and then conditions deteriorated as a second plume of dust washed over the islands. Visibility plummeted to just tens of meters in some places. That, combined with strong winds gusting to 75 mph, forced airports to close and nearly 800 flights to be cancelled or rerouted.

Known locally as “La Calima,” the phenomenon typically is caused by hot, high pressure over the Sahara and a low-pressure storm system out over the northeastern Atlantic. This time was no different.

In the image above, acquired by the GOES-16 weather satellite on Feb. 24, you can see the sand and dust wrapping into the cyclonic circulation of an Atlantic storm system.

And here’s a video showing the swirling, dust-laden storm:

The video cycles several times so you can get a good view of the storm. Known as a cut-off low, it has become displaced — or cut off — from the upper-level air currents that usually carry systems from the west to the east.

When the event first got going, the European Sentinel-3 satellite spied what The Washington Post meteorologist Matthew Cappucci described as “jets of dust rushing toward the Canaries, with roll clouds forming along the leading edge of their choking breeze.”

Strong winds blowing from the Sahara carried large amounts of sand out to sea on Saturday, Feb. 22, as seen in this satellite image. (Credit: EO Browser)

The image above, captured by the European Sentinel-3 satellite, shows what that looked like. As high winds were propelling dust from the western Sahara and Morocco toward the Canary Islands, long, tube-shaped features formed roughly perpendicular to the wind flow. These are dust-laden roll clouds, which typically are associated with a gust front.

Other curious features formed downwind of the Canaries, as seen in this image from the Aqua satellite on Feb. 23:

Strong winds blowing to the northwest carried dust and sand over the Canary Islands on Feb. 23, as seen in this image acquired by NASA's Aqua satellite. (Credit: NASA Earth Observatory)

These features, which go by different names — lee waves, wave clouds and orographic waves — are typically visible in satellite images as a chevron-shaped pattern of regular clouds forming downwind of an island. In this case, it looks like the copious dust being carried by the winds from the Sahara have helped to make the waves visible.