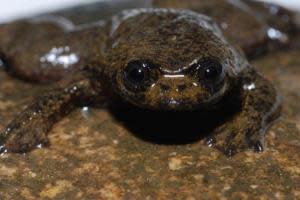 Researchers in Singapore say they have discovered a frog that has no lungs. Called the "Barbourula kalimantanensis," the aquatic frog appears to do all of its breathing entirely through its skin. The frog's shape—a highly flattened body that maximizes the surface area of its skin—allows it to absorb all necessary oxygen in its habitat, which is made up of cold, fast-flowing water. David Bickford of the National University of Singapore, who found the frog during an expedition in Borneo, reportedly called complete lunglessness a "particularly rare evolutionary event that has probably only occurred three times." The only other four-legged animals known to have no lungs are certain salamanders and one species of caecilian, "a limbless amphibian resembling an earthworm." Of course, lest we get too excited about the opportunities for new research and exploration of this unique species, Bickford informs us that the frog is endangered, and could be wiped out by illegal gold mining practices that are destroying its habitat. Now wouldn't that just be heartless? Photo Courtesy of David Bickford