Researchers gain insights into human brain evolution and find evidence of our ancestors in new places. 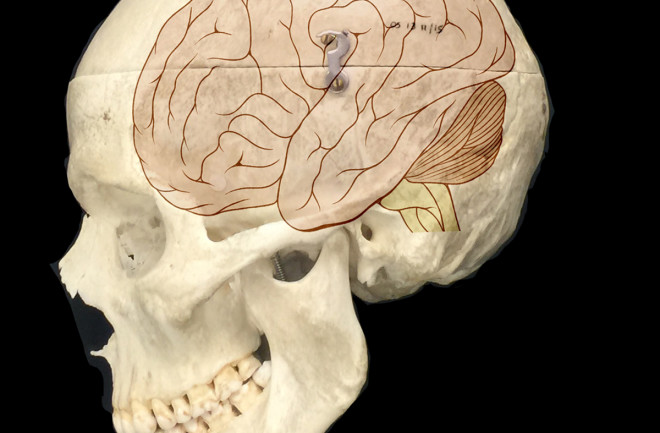 The human brain is a big deal. In relation to body size, it’s nearly six times bigger than that of other placental mammals. Our brains’ size and organizational complexity are hallmarks of being human.

But what were the genetic changes behind our big, complex brains, and what drove their evolution? Key new evidence, and a new model, move us closer to finally figuring it out.

How to Build a Brain

In May, a pair of papers published by separate teams in the journal Cell focused on the NOTCH family of genes, found in all animals and critical to an embryo’s development: They produce the proteins that tell stem cells what to turn into, such as neurons in the brain. The researchers looked at relatives of the NOTCH2 gene that are present today only in humans.

In a distant ancestor 8 million to 14 million years ago, they found, a copying error resulted in an “extra hunk of DNA,” says David Haussler of the University of California, Santa Cruz, a senior author of one of the new studies.

This non-functioning extra piece of NOTCH2 code is still present in chimps and gorillas, but not in orangutans, which went off on their own evolutionary path 14 million years ago.

About 3 million to 4 million years ago, a few million years after our own lineage split from other apes, a second mutation activated the once non-functional code. This human-specific gene, called NOTCH2NL, began producing proteins involved in turning neural stem cells into cortical neurons. NOTCH2NL pumped up the number of neurons in the neocortex, the seat of advanced cognitive function. Over time, this led to bigger, more powerful brains.

“This is the first human-specific gene in a fundamental pathway known to control brain size,” Haussler said.

The researchers also found NOTCH2NL in the ancient genomes of our closest evolutionary kin: the Denisovans and the Neanderthals, who had brain volumes similar to our own.

Haussler and colleagues are now hunting the specific molecular mechanisms at work.

NOTCH2NL helped make our ancestors’ brains bigger, but brain tissue is expensive stuff, metabolically speaking. “The brain is 4 percent the weight of the body but consumes 20 percent of your energy,” says Mauricio González-Forero, a mathematical evolutionary biologist at Scotland’s University of St. Andrews. “And you cannot shut it off.”

Something must have driven the evolution of bigger, costlier brains. Three contenders have emerged: social challenges (both cooperative and competitive), ecological challenges (finding food, avoiding predators) and cultural challenges (being able to share acquired knowledge and skills). Most researchers believed that social challenges drove greater intelligence, but the models were largely untestable.

In Nature in May, González-Forero and his colleague Andy Gardner debuted a computational tool to understand what drove human brains to get bigger. Their approach, says González-Forero, is more complicated than others but also grounded in actual number crunching. The goal is to look not just at why our brains got bigger, but why they got as big as they did.

The pair looked at the energy costs of different kinds of tissues, as well as body size. Growth of any one component requires increased energy, but it’s a trade-off: Boosting brain size also boosts skill, but a larger, energy-hungry brain reduces the energy available for the rest of the body, such as the reproductive tissues.

The new model generated multiple scenarios, each with a different combination of challenges, that could explain various brain-to-body-size ratios.

González-Forero expected that the need for social intelligence — the leading hypothesis — would come out on top, but the opposite was true. What he calls the “arms race” of ever-brainier individuals competing with each other backfired.

“It moves you to exaggerated brain size, but they get too expensive [metabolically],” he says.

Instead, the study found the most likely scenario to explain our brain-to-body size ratio was 60 percent ecological challenges, 30 percent collaboration and 10 percent between-group competition.

Social intelligence theorists remain skeptical of the results, but González-Forero notes: “We’re not wedded to any particular hypothesis. We’re just offering a tool.”

And he’s already planning to refine that tool. The initial model did not take into account the cultural intelligence hypothesis, which he hopes to incorporate.

Researchers agree that the earliest hominins — our branch of the primate family tree — emerged in Africa. But things get a little fuzzy after that. In particular, the map of when and how members of the genus Homo spread across the Old World continues to change. A number of finds this year chart a new course for our ancestors and distant kin.

Misliya, Israel: Announced in January in Science, the partial jaw of an anatomically modern human was dated to be 177,000 to 194,000 years old. It’s the oldest skeletal evidence of our species beyond Africa, and pre-dates earlier estimates of when Homo sapiens left that continent by more than 50,000 years.

Al Wusta, Saudi Arabia: At about 85,000 years old, this finger bone is the oldest anatomically modern human fossil found on the Arabian Peninsula, researchers reported in April in Nature Ecology & Evolution. Based on animal bones, stone tools and sediment deposits at the same site, the team believes it was beside a year-round freshwater lake, surrounded by semi-arid grassland full of game: an attractive camp for the early hunter-gatherers they believe spent time there.

Shangchen, China: A single site in northern China has turned up nearly 100 stone tools made over a span of 800,000 years. The oldest are about 2.1 million years old, the earliest evidence of hominins outside Africa. Published in Nature in July, analysis of the artifacts noted they were found with the bones of deer and other animals, but no hominin fossils. A 1964 excavation a few miles away, however, turned up a 1.63 million-year-old partial Homo erectus skull.

Attirampakkam, India: Scores of stone tools up to 385,000 years old are evidence that H. sapiens left Africa much earlier than thought, say the authors of a January study in Nature, although no human bones were found. Other researchers, however, believe the tools are not as advanced as the authors claim and could have been made by another, more archaic species.

Let’s retire, once and for all, the outdated notion that Neanderthals were dumb brutes, an idea that’s stuck despite a raft of contrary finds over the last decade. In 2018, a trio of studies from separate teams unearthed yet more evidence that our closest evolutionary kin were capable of complex abstract thought, including symbolic art (February, Science), cooperative big-game hunting tactics (June, Nature Ecology & Evolution) and the production of fire using stone tools (July, Scientific Reports).

Researchers recovered the genome of a teenage girl, who lived about 90,000 years ago, from an inch-long splinter of bone found in Denisova Cave in Siberia. Her mother was Neanderthal and her father was Denisovan, another species of extinct human. While geneticists have previously uncovered evidence of interbreeding in the genus Homo, this new find, announced in August in Nature, is the first time researchers have identified the first-generation offspring of different archaic human populations.

From the Feet of Babes

We modern, bipedal humans walk efficiently on two legs, but evolved from tree-dwellers that didn’t. Exactly when in our origin story that transition from arboreal to terrestrial living occurred has long been a contentious issue in paleoanthropology.

Many researchers consider Australopithecus afarensis, living 3 million to 4 million years ago in East Africa, the first fully bipedal ancestor. In Science Advances in July, however, a team analyzing the 3.32 million-year-old partial foot of a juvenile A. afarensis reported adaptations for efficient tree climbing not seen in adult members of the same species. The researchers think the traits may mean younger A. afarensis individuals hung out in the trees for safety from predators but, once fully grown, spent time on the ground foraging.