Recently discovered species are just a fraction of life hidden beneath the ocean. 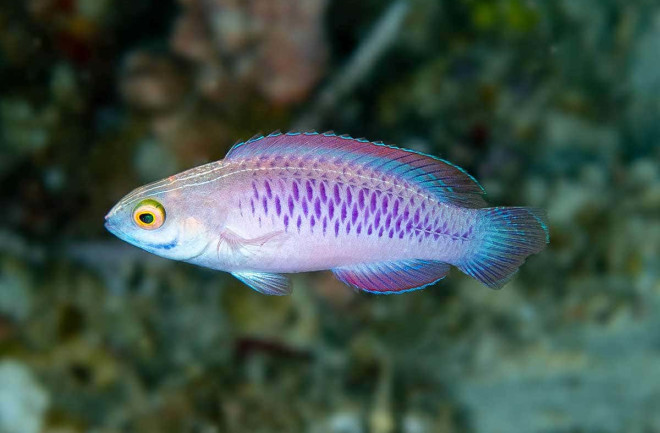 With an estimated 50 to 80 percent of all life located in the ocean, there’s an entire world that exists under water. As of 2021, there were over 230,000 identified marine species. But scientists believe there are actually many more — perhaps anywhere from 750,000 to up to 25 million — still undiscovered marine species. Here are five interesting sea creatures that were newly discovered in the past few years.

Sponges are organisms that live on the bottom of the ocean and are an integral part of the marine ecosystem in several ways. They maintain micro flora and fauna as well as play a part in transforming carbon and nitrogen. While exploring the deep sea forest of the weird, scientists found an area with a large diversity of unusual sponges. They appeared to rise up on stalks, with their bodies facing the current, which carried food. They named this new sponge the E.T. Sponge, because its appearance reminded them of the creature from the film: large eyes, big head and a long, skinny neck. Found almost 8,000 feet below the sea’s surface, The E.T. Sponge is a type of glass sponge. All glass sponges contain silica particles called spicules, which gives them a structural look.

The equivalent of one truckload of plastic every minute contaminates the oceans. When plastic isn’t recycled, it gets dumped or burned and makes its way into the water. Over time it breaks down in tiny particles that are ingested by living organisms, including amphipods. Amphipods are crustaceans that look like small shrimp (they’re not), and are found in lakes, rivers and oceans.The Giant Plastic Amphipod was given its name because of the plastic found in its gut. These creatures live so deep in the sea there isn’t a lot of food available, so they eat anything they can, including microplastics. Amphipods haven’t developed any avoidance techniques as of yet. When in deep sea locations, amphipods can live at a depth of 9,100 meters. This coin-sized scavenger was found in the Marianas Trench.

An organism of 154 feet in length was discovered last year. It was a type of siphonophore, deep sea predators related to jellyfish. They are composed of individual clones that create a colony, working as one cohesive organism. Sinophores are zooids, which connect to one another in order to effectively perform functions such as stinging prey, moving, or digesting food. Found 630 meters below the surface, researchers believe this creature to be the longest living thing ever found in the world. About as wide as a broomstick, it has a snakelike body, with what resembles fur on one side. In actuality, the fur-like appearance is caused by tentacles that catch small food sources. You can watch a video of this amazing creature here.

With more than 50 species, the fairy wrasse are found around coral reefs. Distinguished by their protruding small teeth and double pupils, these fish have unusually intense colors and patterns.

A new fairy wrasse (the one pictured at the top of the story) was discovered in 2019 off the coast of Zanzibar, more than 230 feet underwater. Striking in its coloring, this species has a yellow head, white and pink scales, purple dorsal fin and purple marking across its body. When scientists saw the details of its unusual scale pattern and purple color, they were reminded of Marvel superhero Black Panther’s vibranium suit. So it was only fitting that they named their new discovery Wakanda, after the fictional nation from the comics and films.

Nudibranchs are mollusks better known as sea slugs. The name comes from the Latin word for naked gills, a reflection of the fact that they are shell-less (except for the larval stage). Russian researchers and Norwegian divers teamed up and discovered a new species of sea slug, which they named dendronotus yrjargul. The first part of its name represents its genus, but the second part has an interesting origin. Yrjar is the old Norse word for what is now Ørland, Norway — near where it was found. And gul is the Norwegian word for yellow or gold. Although it’s a new species, the yrjargul shares certain qualities inherent to all sea slugs: They have soft bodies, tentacles on their head, and are hermaphrodites. Check out this compilation of some interesting sea slugs.