Can common birds make the linguist eat his words? 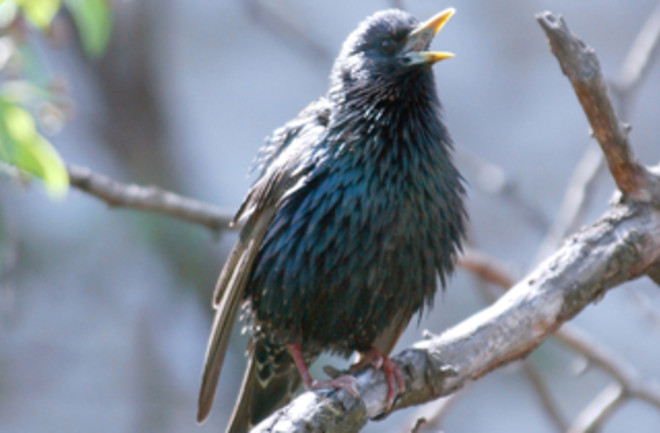 Male European starlings (Sturnus vulgaris) constantly add new sounds to their repertoires, picking up nearly any auditory object they can find, including the sounds of car alarms, squeaky doors, human speech and the vocalizations of other species. | Daniel Baleckaitis

Noam Chomsky, that noted linguist, has theorized that one of the main hallmarks that distinguishes human language from the squeaks and rumblings of birds and beasts is the ability to use something called recursive grammar. Essentially, recursive grammar is what enables us to insert an explanatory clause in the midst of a sentence, such as the 'that noted linguist,' in the preceding sentence.

Now a team of zoologists and psychologists led by University of California at San Diego's Timothy Gentner has shown that the lowly European starling is also quite capable of using this kind of syntax.

Gentner created sixteen artificial starling songs that followed two different patterning rules – a human-type song which had a clause inserted in the middle of an acoustic note string and another animal-type song with a clause only at the very beginning or end of the string. Gentner then played his repertoire to a test group of eleven starlings, rewarding them with food when they managed to pick out the human-type songs.

After several months of practice, nine of the birds were able to recognize the patterns consistently and even recognize new songs that had recursive elements in them. The success was especially surprising because it means that starlings are able to grasp an element of language that experimenters have not been able to replicate in other primates.

Although Gentner's work proves that recursion goes beyond humans, it doesn't prove that the birds have the ability to expand upon the grammatical rule in a general sense and understand the abstract concepts behind changes in meanings, says New York University psychologist Gary Marcus. Chomsky assumed that all human children are born with an innate sense of recursion together with other aspects of a universal grammar found in every human language from Sanskrit to Spanish. The starlings can recognize a basic grammatical rule, but it doesn't necessarily mean they grasp the wider concept behind it or can acquire the semantic subtleties of language.

It may be that recursion is confined to the relatively rare number of species that can acquire new patterns of vocalization – humans and certain species of cetaceans and birds. Starlings are especially adept at learning new songs – even copying those from other species and foreign sounds like human words. But it doesn't mean they know what they mean.

To read the abstract of this study, published in the April 27 issue of Nature, clickhttp://www.nature.com/nature/journal/v440/n7088/abs/nature04675.html