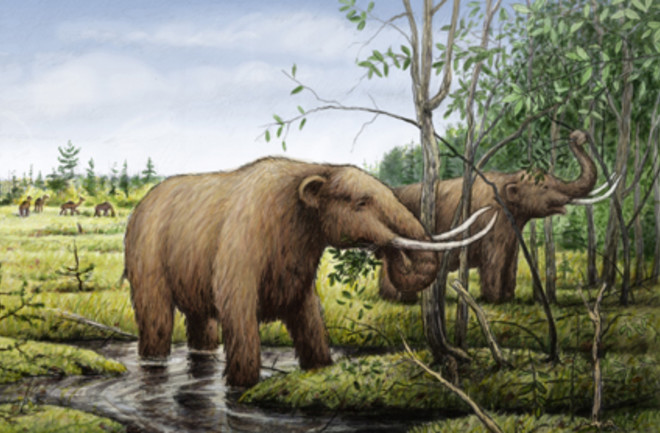 A fungus found within ancient mammoth dung is providing scientists with clues about how the large ancient mammals collectively known as megafauna went extinct. The fungus, Sporormiella,

produces spores in the dung of large herbivores. These are then preserved in the layers of mud and can provide an index of the number of these animals, or megafauna, that roamed the environment at a particular time [BBC News].

For a new study, researcher Jacquelyn Gill collected and analyzed spores in sediment samples from an Indiana lake and several sites in New York.

From Gill's analysis, published in the journal Science, she concluded that North American megafauna began a slow decline around 15,000 years ago and vanished about 1,000 years later. The data suggests megafauna started going extinct much earlier than previously though, which basically wipes out two theories of their extinction.

There are several theories surrounding the extinction of North American megafuana, but there are a lot more questions than answers. Much of the uncertainty surrounding the extinction of the North American megafauna, which includes mastadons, saber-tooth tigers and giant ground sloths, is due to a scarcity of evidence and difficulty pinning down the timing of events. Several major events occurred around the same time the animals disappeared: Major environmental upheaval associated with the end of the Ice Age; an asteroid explosion over North America; and the arrival of man [Wired.com]. But the new data points to an extinction culprit other than an asteroid or comet impact, because the impact is believed to have occurred long after the megafauna began their decline.

If humans were responsible for the extinction, it would have to be settlers that came along before the Clovis people, which is another debate in itself. The Clovis culture is thought to have been the first civilization to take hold in North America around 13,300 years ago--after the bulk of the megafauna extinctions, according to the new analysis. But some researchers believe that earlier settlers walked the land before the Clovis people, and could have hunted the mastodons and mammoths. The new study adds crucial info to the fossil record, but it is likely to kindle, rather than quench, the debate over megafauna extinction. Related Content: 80beats: Cavemen Found Innocent: Cave Bears Died From Cold, Not Spears 80beats: Scientist Smackdown: Were Giant Kangaroos Hunted Into Extinction? 80beats: On the Galapagos Islands, an Evolutionary Puzzle That Darwin MissedImage: Barry Roal Carlsen, University of Wisconsin-Madison