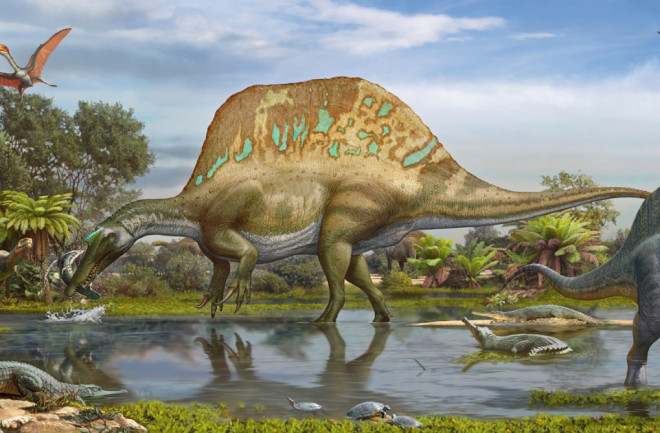 Spinosaurus may have eaten its prey much like a giant pelican or modern day snakes. (Credit: Sergey Krasovskiy)Spinosaurus gained a notorious reputation in Jurassic Park 3 (spoiler alert), stomping on to the screen to take down the mighty T. rex in a rather memorable duel. Since gaining global fame on the silver screen, researchers now believe Spinosaurus was an adept swimmer, terrorizing local inhabitants of ancient river systems in North Africa some 100 million years ago. A new study of the jaws of Spinosaurus indicates that it may have devoured its prey much like a giant pelican or modern snakes, opening its jaws wide to swallow unlucky critters whole. New fossils from rocks dating to the Cretaceous period from southeastern Morocco, known as the Kem-Kem beds, show that spinosaurs were able to widen their jaws and greatly open the pharynx to swallow over-sized chunks of food.

“Spinosaurs were very strange animals with a crocodile-like skull showing a long and narrow snout and conical teeth,” says Octávio Mateus from Universidade Nova de Lisboa, Portugal. This has usually led to interpretations of spinosaurs as skilled fish hunters that may have even used their long claws as fish hooks. The new study, published recently in the open-access journal PLOS One, is the first time a pelican-like feeding style has been discovered in dinosaurs. Christophe Hendrickx, lead author of the study and also at the Universidade Nova de Lisboa, noted that an unusual aspect of spinosaur jaws led to this conclusion. “The mandibular symphysis [where the jaw bones meet at the front] of spinosaurids shows prominent parallel ridges where connective tissues got attached,” Henrickx says. This was combined with spinosaurs' highly unusual anatomy where the lower jawbones articulated with the skull, which were much more free and mobile than other theropod dinosaurs.

An illustration of Spinosaurus swallowing a snack. (Credit: Jason Poole) The design of the spinosaur jaw enabled the left and right jaws to be more movable and widen much more than if they were fused together like other bones in the skull. Similar feeding mechanics have also been suggested in pterosaurs, the cousins of dinosaurs, which are thought to also have preyed largely on fish. Why spinosaurs adapted to dine like this is still up for debate. Hendrickx suggests that being able to eat large prey rapidly was necessary to sustain an animal of such a massive size. Spinosaurus grew up to 50 feet in length – longer than a T. rex. Gulping down food in a single bite might have also given them a competitive edge in a time when herbivorous dinosaurs, usually the prey of choice for theropod predators, in North Africa were relatively rare.

Christophe Hendrickx stands before a Spinosaurus skull. Although often imagined as an adept fisher, Spinosaurus and its large relatives might also have preyed on other animals careless enough to get too close. “It is very possible that the two spinosaurs from Morocco were also eating other type of preys such as herbivorous dinosaurs, pterosaurs, crocodiles, and turtles, and probably swallowed them as a whole if these preys were not too large,” Hendrickx says. The newly discovered remains also help confirm a previous suspicion that the fossilized remains used to reconstruct Spinosaurus probably came from at least two different closely related species. Serjoscha Evers, a researcher at the University of Oxford who works on North African spinosaurs but was not involved in the present study, thinks the “environment of a near-coast river system would have supported their high diversity,” and that predators like spinosaurs were extreme specialists, “with niche partitioning playing a major role.” Either way, the vision of a 15-meter-long crocodile-like dinosaur gulping its prey down is pretty terrifying.