You’ve heard of extreme ironing. You’ve heard of extreme sitting. Both are fairly new inventions, but the craziest extreme sport of all has been around for at least 44 million years. It’s spider-boarding. Spider-boarding is practiced by a group of insects called mantidflies. The larvae of most mantidfly species are fussy diners – they only eat the eggs of spiders. That seems like a dangerous enough strategy, for spiders are formidable hunters. But it gets crazier – some mantidflies find spider egg sacs by hitching a ride on the backs of adults. Now, Michael Ohl from Berlin’s Museum of Natural History has found a beautiful example of this behaviour amidst the museum’s collections. It’s a 44 million year old piece of amber with a spider inside it. And there, latched onto its underside just as its modern relatives do, is a mantidfly larva. In the photos above, it's facing to the right and you can clearly see the three legs on its right side. Mantidflies are named after praying mantises, and it’s easy to see why. The adults also have long, grasping arms lined with wicked spines, which they use to snatch at their prey. In fact, they belong to an entirely different group of insects – the lacewings. Their wicked forearms are a fine example of convergent evolution, where different living things independently evolve the same solutions to life’s trials. 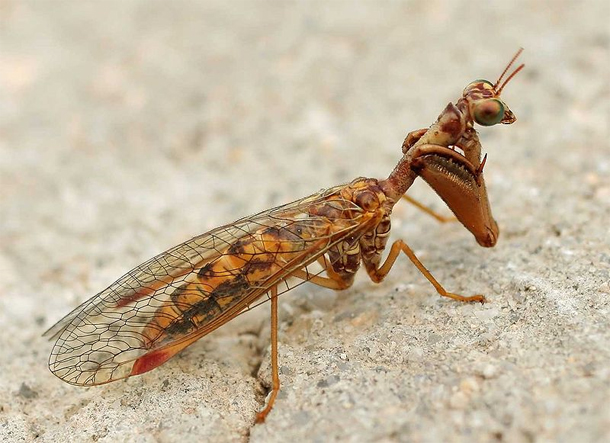 As larvae, mantidflies are a far cry from the fearsome hunting adults. When they hatch, they’re mobile but stumpy and flattened, just like the individual in Ohl’s amber. In this form, they have two strategies for preying upon spider eggs. The “penetrators” take the direct approach – chewing through the silk casing that surrounds the eggs and sucking them dry. The “spider-boarders” can’t chew through the egg sacs. Instead, they ensure that they get inside the sac as it is being built. They climb aboard passing females, wrapping themselves around the base of their abdomens so they can’t be caught. Once aboard, the larvae suck the blood of their vehicles to nourish themselves on their journey. When the female finally lays eggs, the mantidfly drops off. The spider spins its silken sac, unwittingly sealing the larvae in with its precious eggs. Once inside, the mantidfly undergoes another startling transformation. From mobile larva, it becomes a fat grub that slowly pierces and drains the eggs. When the grub has had enough, it spins its own cocoon and finally transforms into the hunting body of an adult. Ohl thinks that the mantidfly in his piece of amber has accidentally boarded a poor vehicle. Typically, the larvae latch onto adult spiders that are much bigger than they are. The one in the amber seems to be clinging onto a juvenile female. That wouldn’t have been a problem – mantidflies are good at coping with poor hosts. If they end up on a juvenile, they can crawl inside the host’s lungs and wait there until the spider moults into an adult. If they find a host at the wrong time of the year, they can spend the entire winter on board, delaying their own development until the next year. If they jump onto a male spider, they’ll wait until their carrier has sex with a female and hop across to her – even spiders have sexually transmitted parasites. The one in Ohl’s specimen never got the chance. It and its host were entombed in tree sap, which fossilised into amber over time and ended up in Ohl’s collection. It’s an incredible find, not least because only ten fossils of mantidflies have ever been found. 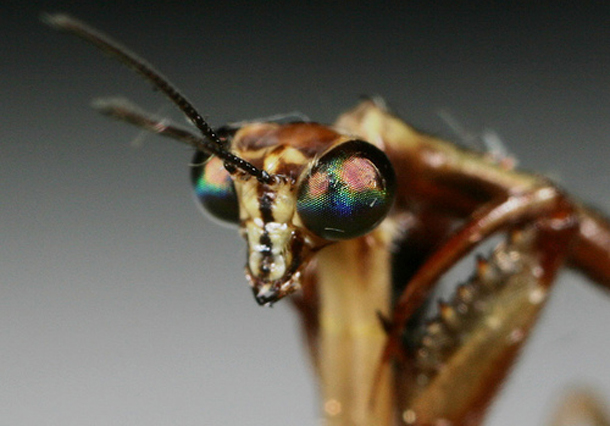