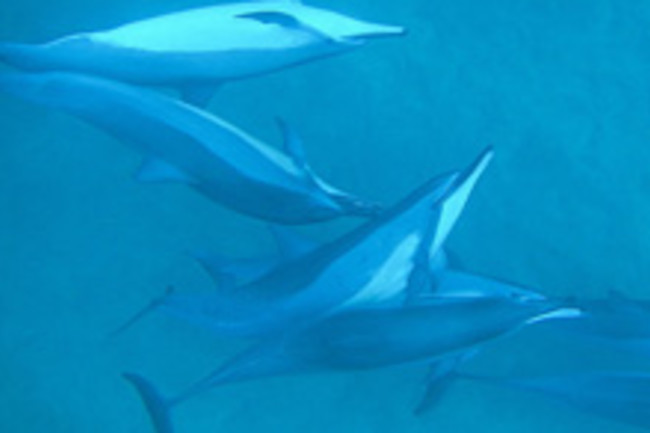 Powerful sonar causes temporary hearing loss in dolphins, a new study has confirmed, and could explain some incidents of mass stranding of the marine mammals. The impact of sonar on dolphins has been debated for years, but for the first time, researchers have played recordings of actual naval sonar to a marine mammal and tested its hearing after progressive step-ups in intensity over a couple of months [ScienceNews]. Tests were conducted at the Hawaii Institute of Marine Biology on a captive dolphin, whose head was fitted with a suction cup attached to a sensor that monitored brainwaves. The dolphin was then exposed to progressively louder pings of mid-frequency sonar.... When the pings reached 203 decibels and were repeated, the neurological data showed the mammal had become deaf, for its brain no longer responded to sound [AFP]. The study, which was published in Biology Letters, found that the dolphin's hearing was typically restored after 20 minutes, and its loss only occurred after the dolphin was exposed to five rounds of noise. Each round comprised a block of three pings, with 24 seconds between each block [AFP]. But the impaired hearing, which lead researcher Aran Mooney calls a "rock-concert effect," strengthens fears that the sonar used in naval exercises are responsible for at least some of the strandings of dolphins and whales that have occurred over the last ten years. Some researchers suggest that the temporary hearing loss disorients and panics the animals, causing them to surface so quickly that they get decompression sickness, or "the bends." Nevertheless, last year the U.S. Supreme Court ruled that the navy's sonar exercises can continue without restrictions.

To induce deafness in the Atlantic bottlenose dolphin, Tursiops truncatus, the sonar device would have to be loud, close and would need to last for at least two minutes. This should give the animals plenty of time to escape but in some circumstances noises can be caught in "underwater sound traps"

[Times Online], said Mooney. Such traps are created when a layer of warm water sits above cold water; sound traveling from the warm water can be bounced back when it hits the cold layer, rather than traveling through it. It then becomes trapped, and bounces around "like a ping-pong ball", giving whales and dolphins little chance of escaping it. Similar effects could be experienced in parts of the sea with mountains and ravines, where the sound would bounce back and forth. Dr Mooney said that this could explain three of the best-known strandings that have been linked to military sonar – in the Bahamas, the Canaries and Hawaii – because all three regions had a mountainous underwater topography [Times Online]. Related Content: 80beats: Navy 1, Whales 0: Supreme Court Allows Navy’s Sonar Exercises 80beats: Whales Battle U.S. Military…and (Probably) Lose DISCOVER: Killing Whales With Sound