Some Ants Never Get Old 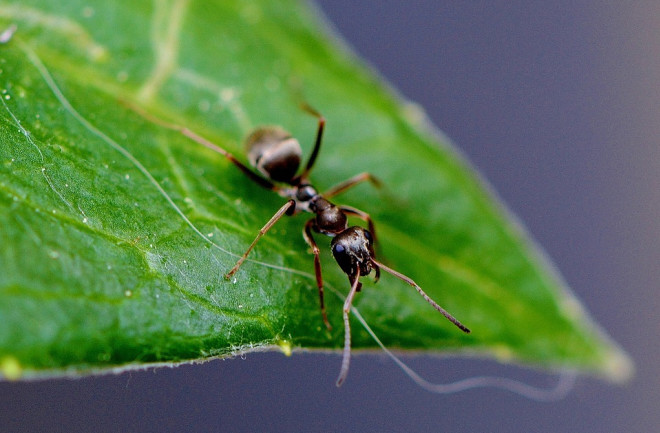 (Credit: Alexas_Fotos/Pixabay) It's better to burn out than to fade away, according to Neil Young. And one ant species seems to embody this timeless philosophical advice. Getting old is no fun. Failing bodies, faltering eyesight and declining health plague us as we enter the autumn of our lives. Aging for humans is as implacable as it is frightening, and despite years of research, we have made very little headway in halting our senescence. For one species of ant, the passage of time isn't associated with diminishing physical prowess. A team of researchers led by James Traniello, a professor in the biology department at Boston University, studied Pheidole dentata, a species of American ant, and found that the minor worker ants showed no declines in fitness or health as they aged — they even improved as they got older. They recently published their findings in the journal Proceedings of the Royal Society B.

The scientists observed the ants in a lab as they went about their days caring for larvae and securing food. They judged the ants ability to perform tasks such as nourishing and carrying eggs, following a pheromone trail leading to food, and aggressively attacking a captive fruit fly — a tasty meal for an ant. Aging ants would be expected to slow down and get progressively worse at such tasks. Next they examined a random selection of both young and old ant brains to see if the hallmarks of aging, such as brain cell death and drops in serotonin and dopamine levels were present. All of their tests showed no differences between the old ants and their younger counterparts. The ants appeared to operate at full capacity throughout their entire lives and went about their jobs with the same vigor. Older ants even appeared to improve in some tasks, such as pheromone tracking, where experience seems to trump youth. P. dentata's non-existent senescence is an anomaly in the insect world, according to Joel Parker, a professor of biological science at the State University of New York-Plattsburgh. Other species of insects have progressive mortality rates that are in line with humans. “After age thirty mortality rates double in humans about every eight years (i.e. a 62 year old is twice as likely to die as a 56 year old),” Parker, who was not involved with the study, wrote in an email to Discover. “This is a very consistent increase that doesn't slow down until one is around 100 years old. Most other animals show a similar pattern, including worms and fruit flies, although the actual rate of increase is different.” The researchers are still not sure why P. dentata successfully "rage against the dying of the light," but they think it may have something to do with the fact that they are social insects. According to Parker, social insects have evolved over time to have longer lifespans in order to protect and feed their queens. An ant colony can only survive as long as its queen can reproduce, which can vary from a year or two to almost thirty.

Ant colonies are highly structured societies, and every ant is born to assume one or a mixture of the following job roles: worker, drone, soldier or queen. Along with their job specializations come radically different lifespans, which are likely related to the relative importance of their job within the colony. Males tasked with breeding, for example, live for a few months, while some workers can survive for over a year. Additionally, the colony structure itself confers sizable lifespan benefits, as Traniello found in a previous study, a result of having more food and better defenses against predators and infection, among other factors. The minor worker ants in this study live for roughly 140 days in the laboratory, and then drop dead with little apparent cause. It is still unclear how the ants go from healthy, productive members of the colony to stone-cold dead so suddenly. One explanation, says Parker, could be the practice of age polyethism found in social insect colonies. Worker ants take on different roles as they grow and become more mature, starting out as nursery caretakers when they are young, shifting to hive maintenance in middle age, and are finally pressed into service as foragers and guards, the most dangerous tasks. An analogue to humans, says Parker, would be sending our senior citizens to do the most dangerous tasks in society, as they are the most expendable. While this is a decidedly cruel way to divide labor, it makes sense in an ant colony where the survival of the group depends entirely on the lifespan and reproductive success of the queen. Individual workers’ lives are subordinate to the life of the colony as a whole. From an evolutionary perspective, maximizing the usefulness of workers while limiting their decline into old age creates a more robust colony. Traniello doubts that this is the case however, as he says the ants they observed were optimized to perform a range of activities at any given time, rather than just one. Instead of dying from predation, most seemed to just die off with little explanation, all around the same age. He thinks that there is likely an unknown molecular breakdown occurring in their bodies when they pass a certain age. Ants in the laboratory live longer than ants in the wild, and his subjects seem to fall prey to some sort of biological doomsday clock.