Sodium Spurs a Tadpole to Regenerate Its Tail 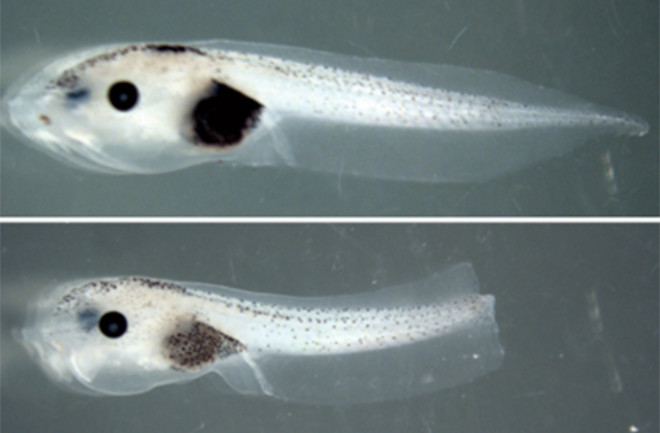 If a young tadpole loses its tail, no problem—it can grow a new one. Biologist Michael Levin and his team experimented with this amphibian talent, and they say they found the signal that triggers the regeneration: sodium. If scientists can find the trigger in tadpoles, perhaps someday they could find triggers for other species. Maybe even humans.

The sodium infusion got tadpoles to regrow lost tails even if scar tissue had already formed over the wound. Conversely, blocking the flow of sodium ions to the nerve cells prevented the regeneration.

One particular [sodium]-importing channel, called NaV1.2, was required for tail regrowth, the team found. NaV1.2 is well-known for its role in brain-cell communication and heart-cell beating, but scientists had no idea it might be important for regeneration. [Science News]

That's great for tadpoles, but what about humans? Levin points out that we're not so different: Children, up to age 11 or so, can regrow bits of lost fingertips. Like tadpoles, we lose this ability when we get older. Levin is bullish for scientists to learn the triggers for this kind of regeneration in other species, believing that someday we could get back in touch with the regenerative ability our bodies knew when we were kids.

"Without re-creating the appendage from scratch, we provide the host organism a signal to do it from scratch," Levin said. "The use of electrical signals to enhance regeneration is applicable to every species. Any organism knows what shape it should be, and it takes steps to get back to where it used to be." [LiveScience]

His team's paper is forthcoming in the Journal of Neuroscience

DISCOVER: How To Grow a New Limb

DISCOVER: Have We Entered the Stem Cell Era?

, or, how to make our cells young again Image: Levin et. al.