Sociable wasps have an eye for faces 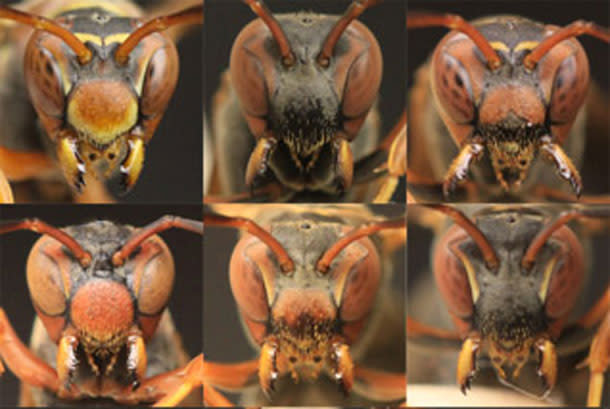 At first glance, we might think that all wasps look the same. But if you look closer at the face of a paper waspPolistes fuscatus, you’ll see a variety of distinctive markings. Each face has its own characteristic splashes of red, black, ochre and yellow, and it’s reasonably easy to tell individuals apart. And that’s exactly what the wasps can do. Michael Sheehan and Elizabeth Tibbetts have shown that these sociable insects have evolved the special ability to recognise each others’ faces. They can learn the difference between different faces more quickly than between other images, or between faces whose features have been rearranged. It’s an adaptation to a social life, and one that a close but solitary relative – Polistes metricus – does not share. Other animals also have the ability to recognise faces, including a variety of mammals such as humans, other primates, dogs and sheep. This skill goes well beyond a general ability to learn shapes or patterns – faces hold a special thrall for us. Our brains process images of faces differently than any other group of image. Now, it seems that P.fuscatus has also evolved the same specialism for faces, independently of us mammals. Tibbetts’ work on wasps dates back to 2002, when she discovered the unique faces of P.fuscatus, followed quickly by similarly diverse visages in other social wasps. She soon showed that the wasps can identify one another based on these patterns, and that they have long-lasting memories for faces. She showed that they use their distinctive faces as badges of quality, which help competing queens to establish a royal hierarchy and avoid costly in-fighting. Now, Sheehan and Tibbetts have found that P.fuscatus learns about faces far faster than other groups of images. They placed the wasps in a T-shaped maze, whose floor was electrified except for a single “safe zone” down one of the arms. The zone was always associated with one of two images, so the wasps had to learn the difference between the two to consistently avoid a shocking step. The images included normal wasp faces, caterpillars, and patterns like triangles and squares. Sheehan and Tibbetts also used altered wasp faces, ranging from those that were just missing antennae, to grotesque Picasso-like jumbles. They found that the social P.fuscatus wasps learned to distinguish wasp faces more quickly and accurately than any of the other images. 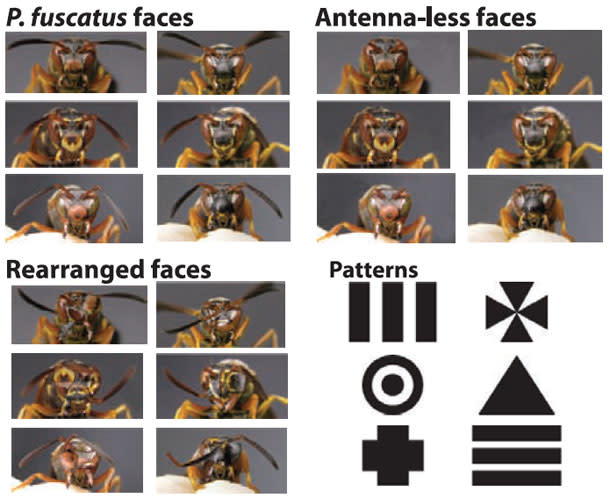 They did better with faces than geometric patterns, even though their eyes are predicted to respond sharply to high-contrast images. They did better with faces than caterpillars, even though caterpillars are some of their favourite prey. They did better with normal faces than jumbled faces, even though both had exactly the same colours and patterns. And even removing the antennae – a single feature – reduced the wasps’ accuracy. These results strongly suggest that P.fuscatus isn’t just using general skills for recognising patterns or shapes – it is specially attuned to faces, antennae and all. The same can’t be said of its close relative, the solitary paper wasp P.metricus. Even after training, these wasps couldn’t discriminate between pairs of faces any more accurately than random guesswork. Instead, they were far better that telling the difference between caterpillars and stark patterns. As Sheehan and Tibbetts write, “Specialized face learning provides a remarkable example of convergent evolution between wasps and mammals.” Both groups have happened upon the same skill, even though their eyes and brains are incredibly different. Now, Tibbetts wants to look at whether the parts of the brain that allow the wasps to recognise each other’s faces have any similarities to those that afford humans, monkeys and sheep with the same ability. Reference: Sheehan & Tibbetts. 2011. Specialized Face Learning IsAssociated with IndividualRecognition in Paper Wasps. Science http://dx.doi.org/10.1126/science.1211334