The clip provides more support that the animals actively hunt, rather than wait for prey to come to them. 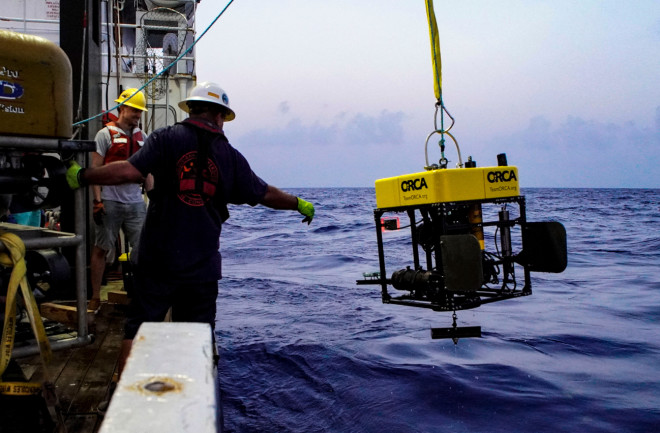 From centuries-old maritime lore to more recent depictions in literature and film, the giant squid looms in our imaginations as a monster of epic proportions. These squids can be more than 40 feet long, with eyes the size of pie dishes and sharp, bird-like beaks that shred their prey.

Even into the 21st century, few people had seen one alive. But in 2019, Nathan Robinson, an independent researcher based in Valencia, Spain, spotted the fabled animal in the Gulf of Mexico while reviewing footage from a camera designed for sneakily observing deep-sea cephalopods like octopuses and squids. “Based on size alone,” he says, “what we were seeing could only really be one thing.”

The footage, which revealed surprising information about the squid’s behavior, is the latest to surface from a covert camera system that first recorded the giant squid in deep waters off the coast of Japan in 2012 — and has since captured footage of at least two additional species of elusive deep-sea squids. In a paper published in June, Robinson and his team describe the camera’s unobtrusive design and specialized bait, which the authors say are fundamental to our viewing of these cunning creatures. The technology has the potential to illuminate the mysteries of the deep ocean, the largest and least understood ecosystem on our planet.

All species of deep-sea squids that have been captured on film by Medusa. The giant squid (bottom right) is the most recent discovery. (Credit: Nathan J. Robinson/Edith Widder)

The camera — called the "Medusa" — is a 3-foot cube that weighs over 200 pounds and was designed by Edie Widder, CEO and senior scientist at the non-profit Ocean Research & Conservation Association, Inc. Widder understood that deep-sea cephalopods, because of their intelligence and sensitive eyesight, avoid traditional sampling methods like trawling nets and loud, bright submersibles. Instead, the stealthy Medusa uses red-light illuminators, which deep-sea critters can’t see, is equipped with low-light cameras and drifts noiselessly through the deep.

“This is a missing part in deep-sea research,” says Nadine Le Bris, a deep-sea scientist at the Oceanological Observatory of Banyuls-sur-Mer in France who was not involved with the study. “They show that if you're non-intrusive in the deep-sea you can learn much more about the organisms and life there.”

Widder attached an electronic lure called an “E-Jelly” to the camera, an addition that the authors say is key to attracting predators like the giant squid. Many deep-sea organisms emit natural light from their bodies, known as bioluminescence, and the swirling LED lights of the E-Jelly mimic the bioluminescent alarm signal of a certain jellyfish species. Even though deep-sea squids aren’t known to eat the jellyfish, they’re attracted to the lights because they might make a meal of its supposed attacker.

With E-Jelly equipped, the Medusa drifts at depths of up to 2,000 meters for 24 to 36 hours — recording many hours of footage that researchers must scour through for signs of life afterwards. “I probably lost a little bit of my mind staring at nothingness,” Robinson says.

But his persistence paid off; scientists gleaned valuable information about the behavior of giant squids from one short clip. While many hypothesized that giant squids were “sit-and-wait” predators that remained stationary and waited for food to come to them, the video proved that the squid stalked the E-Jelly, calculating its attack. “The fact that it was tracking the E-Jelly provides more support that these are actively hunting animals,” Robinson says.

Though more conspicuous cameras have been deployed for decades on crewed submersibles and Remotely Operated Vehicles (and captured extraordinary footage of deep-sea cephalopods), the unobtrusive Medusa and E-Jelly combination “is a useful new way to go about observing those kinds of deep-living critters,” says Bruce Robison, a senior scientist at the Monterey Bay Aquarium Research Institute who helped test earlier versions of the technology. “The rule for us has always been to be as quiet and as stealthy and as unobtrusive as possible.”

Despite its successes, the massive Medusa remains challenging and expensive to operate. Recently, Robinson tested a smaller, lighter version of the camera that records high-resolution, colored footage of the deep-sea. As clips accumulate, scientists hope to learn more about cephalopod ecology and how these animals respond to threats such as ocean acidification and pollution. In addition, Robinson hopes the Medusa’s footage promotes deep-sea conservation by reaching audiences outside the scientific community.

“Getting people excited and motivated to protect these habitats,” he says, “is dependent on getting people to no longer feel like the bottom of the ocean is farther away than the moon.”