SNAPSHOT: Child Buried With Rock in Mouth May Have Been A 'Vampire' 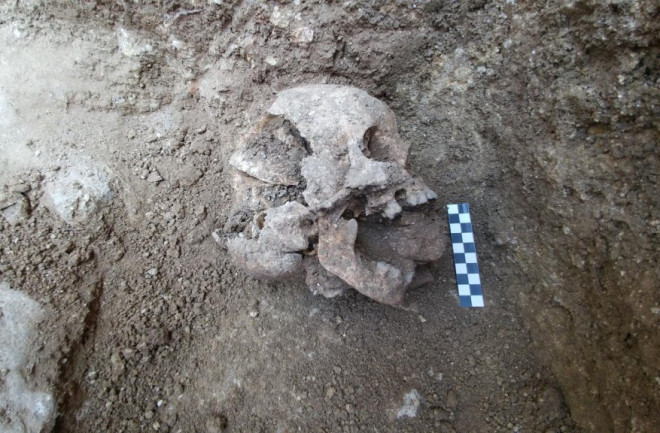 A rock was inserted into the mouth of a 10-year-old to keep the deceased child from rising from the grave and spreading malaria, researchers believe. (Credit: David Pickel/Stanford University)

Have you heard of the ‘Vampire of Lugano”? Apparently that’s what residents of the Italian commune of Lugano in Teverina are calling this strange archaeological find — the remains of a 10 year old child found in a 5th century cemetery originally thought to be reserved for toddlers and younger.

But its not age of death that makes this finding so strange … it’s the stone placed in the skeleton’s mouth. Researchers believe it was intentionally placed as part of a ritual to keep the 10 year old from rising from the dead and infecting the community with the fatal disease that killed him or her, likely malaria.

“I’ve never seen anything like it. It’s extremely eerie and weird,” said archaeologist David Soren, who has overseen archaeological excavations in the area since 1987.

The resting ground itself, the La Necropoli dei Bambini, or the Cemetery of the Babies, is rich with archaeological evidence of ritual magic, with findings including raven talons, bronze cauldrons of ash, toad bones and the remains of puppies that appear to have been sacrificed and buried alongside the bones of young humans.

It’s eerily similar to another burial also found in Italy, this time in Venice, and dating to the 16th or 17th centuries — far later than the first. A woman’s skeleton was unearthed on the island of Nuovo Lazzaretto in a cemetery filled with plague victims. Sometime after her burial, a large stone had been placed in her mouth, much like the Lugano victim.

Archaeologists think that the logic was similar to that on display with the Lugano “vampire”. They theorize that gravediggers were somehow convinced that the woman might return from the dead to terrorize the living, and that the stone was meant to prevent that.