In his new book, Serpentine, photographer Mark Laita tackles the tricky photographic subject of snakes. Over the course of the last decade and a half he has captured these colorful, charismatic and sometimes creepy animals. Discover's Breanna Draxler spoke with Laita about the project, and here we feature some of the most striking images and the stories behind them.

"I’m not a specialist in snakes," Laita says. "I just think they’re beautiful." 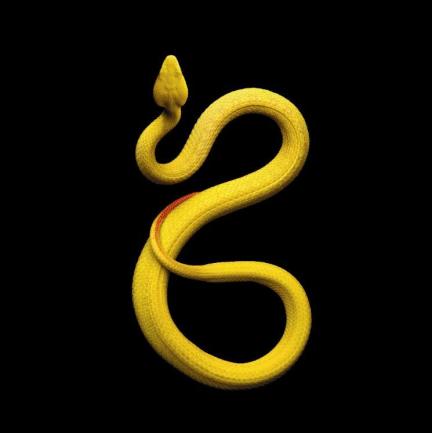 Controversy surrounds the taxonomy of the snake pictured here, and very little is known about this species in particular. But the genus is known to feed on frogs, lizards and small mammals.

Length: Up to 5 feet 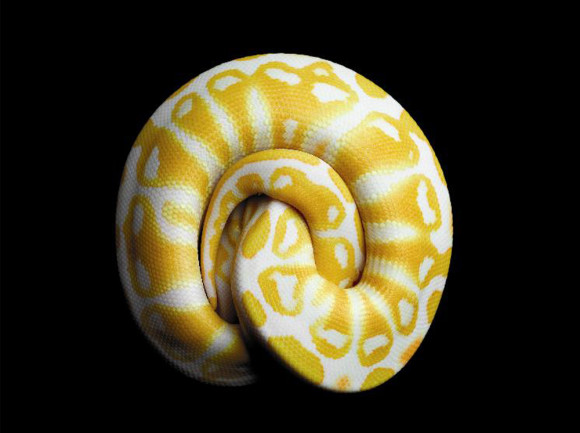 The royal python, pictured here, is also known as a ball python for its tendency to curl into a ball when frightened or stressed. The cream and yellow colors of this albino version contrast with the species' normally black and brown color.

Even this stationary subject, though, displays the fluid lines and graceful beauty of snakes: the perfect subjects for a book which Laita calls an "exploration of shape and color and form and movement." 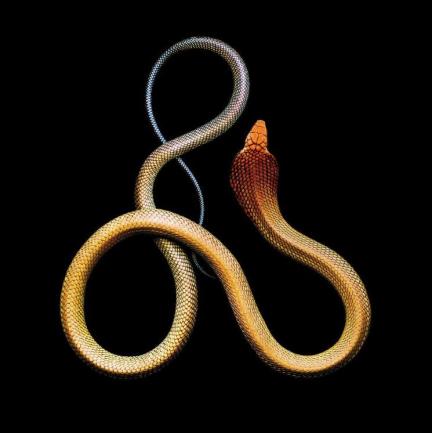 "To me the most beautiful of all is the king cobra," Laita says. "It's like a lion."

Laita says he is drawn to the way the big snake moves, with surprising speed and aggression. But these characteristics made the species one of the most problematic to work with as well. Laita says the king cobra is capable of doing whatever it wants, so even with a trainer on the scene at all times, the photographing sessions turned out to be "a little hairy."

"We did lose a king cobra," Laita says. "We found it eventually, but it got away and got into some cabinets."

After the escape fiasco, Laita decided to photograph the king cobra in a plexiglass box to prevent another high speed chase. "It's like having a car with three engines in it," Laita says. 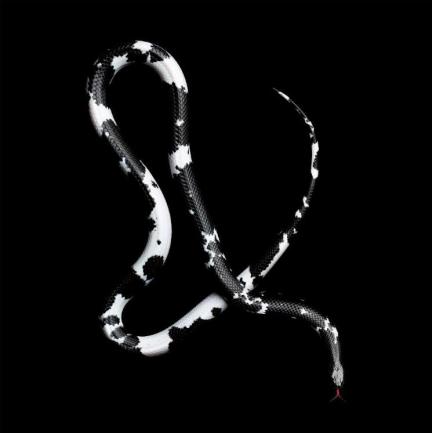 Laita did not pose or set up the snakes for these pictures.

"They’re just beautiful, graceful creatures. If you let them free to do what they do, this is what they’d do," Laita says.

Snakes in the mussurana genus, like the one pictured here, attack and eat other snakes. They are immune to the venom of the snakes they eat, so mussurana snakes are sometimes kept as pets to get rid of other, more dangerous snakes.

Length: Up to 8 feet 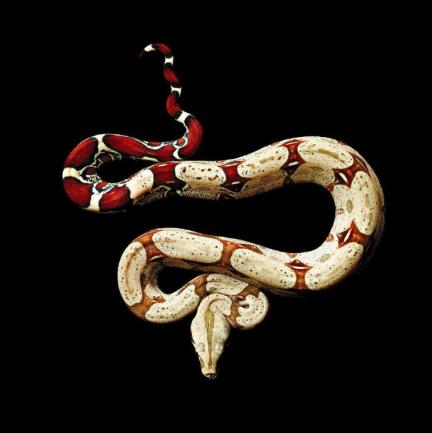 Laita photographed his first snakes in this style back in 1998 and '99. Then he came back and revisited the concept of the colorful snakes on a black background a few years ago. For each individual snake he said he took somewhere between 50 and 75 frames. 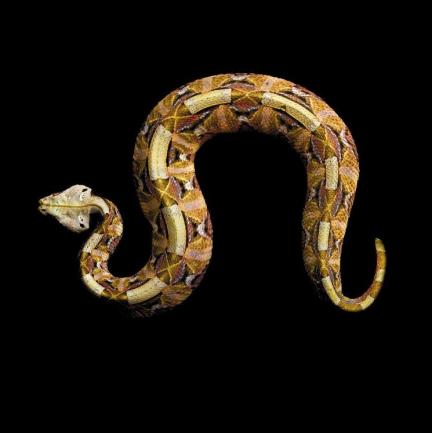 So what's the secret to Laita's stunning images? The process is actually simpler than it seems. He would tape a piece of black fabric on the ground and then photograph from above.

"The set-up is kind of disappointing," Laita says.

The purpose of the black background was "isolating these creatures we normally see camouflaged against leaves and dirt."

Laita wanted to show the snakes in a way that people perhaps haven’t seen them before. 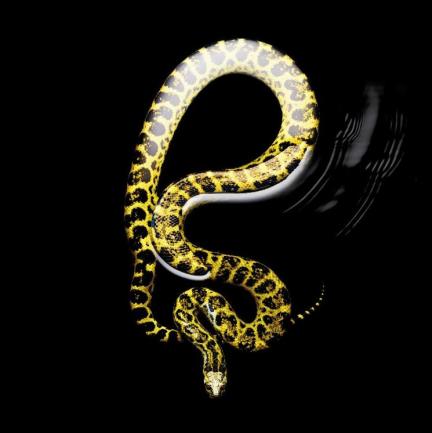 With water-loving species of snake like anacondas, Laita said he photographed them in a pool of water with a black bottom. 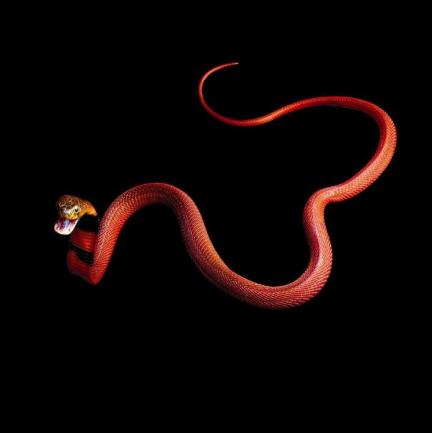 To find his subjects, Laita initially got in touch with a snake collector in Los Angeles, who led him to another in Florida, who sent him to a buddy in Texas. Each snake connection earned him a couple more. "They all know each other," Laita says.

To take his photos, Laita had to go to the snakes instead of the other way around. He visited snake collectors and breeders, zoos and even venom labs, bringing his black fabric to photograph the snakes on-site where they are in their element.

Laita says the best location he found was a reptile gallery in the middle of nowhere in Kentucky.

Length: Up to 4 feet 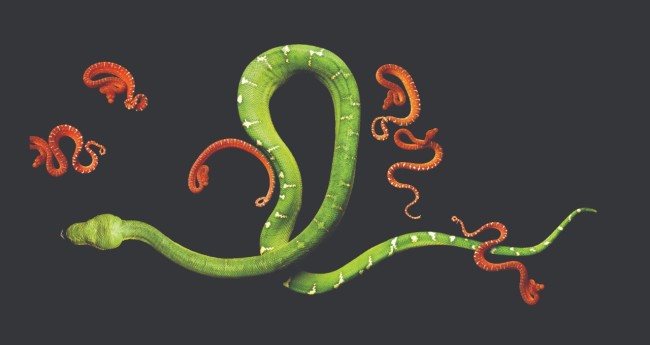 Many of Laita's shots were about being in the right place at the right time. In a few cases he arrived for a photo shoot right after a snake had given birth to live young, or shortly after a snake's eggs had hatched.

"My timing was right," Laita says. "I just happened to be in the right place when the eggs hatched."

The snake pictured here is a live-bearing species, and its offspring look surprisingly different from the mother. 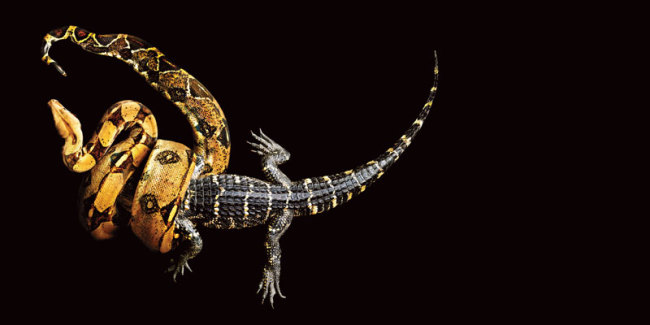 While Laita was photographing a reticulated python, the owner informed him that this snake was big enough to eat an alligator. That was enough of an invitation for Laita. The owner brought out an adolescent alligator and voila!

"You put the two together and the snake just jumped on it instantly," Laita said, adding that the owner was able to pull the two apart, and the alligator survived. For a sense of scale, the young alligator pictured here is three or four feet long, dwarfed by the python which can reach lengths of 32 feet. 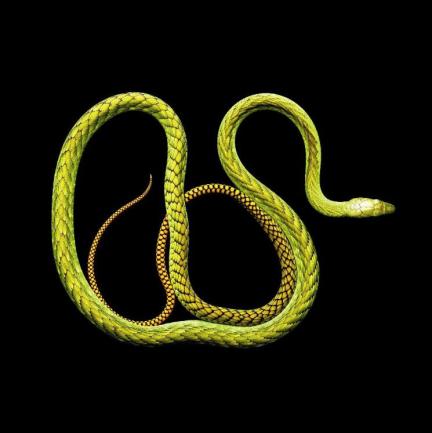 Despite Laita's painstaking procedure, some snakes turned out to be too complicated to photograph. Laita referenced a couple of green mambas in particular, which are a notoriously nervous species, quick to flee (usually up a tree in the wild) in order to avoid confrontation.

"There are just some snakes that didn’t have the temperament to stay on the set,” Laita says. Though this one clearly was a bit more compliant. 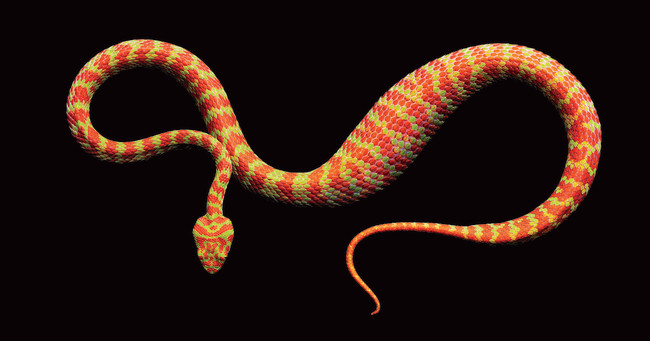 Laita says one of the most beautiful snakes he photographed was the beautiful pit viper.

"It’s named that for a reason," says Laita. "It’s a very unusual mix of colors in an animal."

Here it is shown just after feeding, with a visible bulge in its belly. 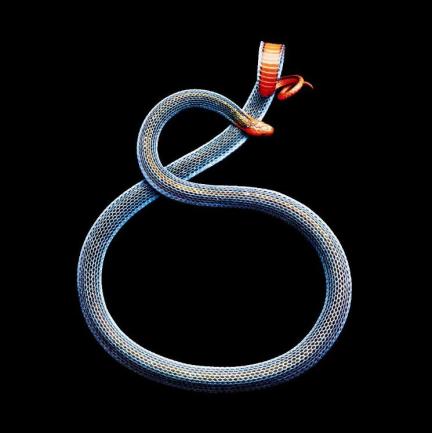 After more than a decade spent photographing snakes in his free time, what did Laita learn about these slithering species? Laita says he now has more respect for how dangerous some species of snake can be.

"There are certain ones that can really mess with you if they want to," Laita says, while "some need to be really provoked."

Laita gave the example of the blue coral snake, which has an incredibly long venom gland, running nearly half the length of its body.

"In general I would say the snakes aren’t going to bother you if you don’t bother them," Laita says, but with "some you can’t do much more than say goodbye."

Length: Up to 6 feet 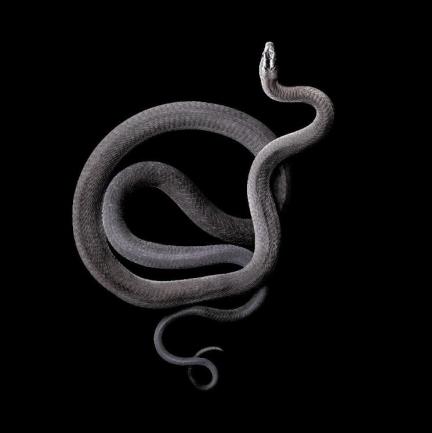 In the book's acknowledgments, Laita thanks "a certain Central American collector who shall remain anonymous out of fear of losing his license because of the black mamba incident."

Naturally, we had to discuss the black mamba incident.

While photographing a black mamba, Laita was bitten. He said the snake didn't attack because he had moved, which is what usually causes a snake to strike. Instead, a cord got caught and its movement spooked the snake, causing it to strike Laita while the trainer wasn't looking.

The strike was quick. So quick, in fact, that Laita didn't even realize it had happened until he noticed the blood on his leg a few minutes later. At that point the trainer did a once-over, checking Laita's heart, breathing and dizziness. Nothing was out of the ordinary. This is lucky since mambas are venomous and very dangerous to humans.

The trainer offered a few explanations for why Laita wasn't harmed by the venom. For one, it was an older snake, and aged individuals tend to save their venom for prey rather than wasting it on predators that are too big to eat. It also could be that the artery in Laita's calf bled so heavily that it essentially flushed the venom out, the trainer suggested.

Laita remained calm during his recollection of the incident, but he said even he was surprised when he realized that he had actually caught the strike on film.

After the incident, Laita was looking through his photos of the black mamba. Laita was taking the pictures near his feet, as he always does, when he found a shot in which the snake's fangs were actually in his leg. "Somewhere in the middle of that I had caught a frame and I didn’t even realize it," Laita said.