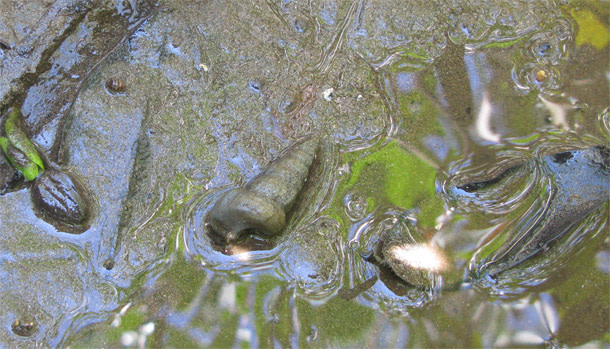 Imagine you’re living off the coast of California, and you want to get to sunny Florida. That sounds easy enough, but there are three big problems in this imaginary scenario. First, you are a snail, so crossing even a small distance takes a lot of time. Second, there is a continent in the way. Third, you are a sea snail so you are not adapted to crawling on land. These problems seem insurmountable and yet snails have made the journey. Osamu Miura from the Smithsonian Tropical Research Institute has found that horn snails crossed from the Pacific to the Atlantic Ocean around 750,000 years ago, while other individuals made the opposite journey around 72,000 years ago. And they probably flew on bird airlines. Earlier this year, Shinichiro Wada showed that one species of snail can indeed survive a trip through the guts of a bird, and uses this unorthodox carrier to hop across Japan’s islands. I covered this story for the first of a regular column in Discover (the actual magazine) on the adaptive tricks of animal underdogs. Here’s what I wrote:

If you have ever complained about flying on a budget airline, spare a thought for the Japanese snail Tornatellides boeningi. The only way for this laggard gastropod to rack up its air miles is to be eaten by a bird and excreted out the other end. And even though the stowaways are slathered in digestive fluids and feces, many of them survive, enabling them to spread their seed over a much larger area than their usual slow-lane pace would allow. “This could help to explain why the snails are so widespread,” says biologist Shinichiro Wada of Tohoku University, who found that snails at one end of Hahajima Island (located south of the Japanese mainland) are as genetically similar to those from the opposite corner as to their neighbors. Some snail species can survive trips through fishes’ digestive systems, but this is the first known to use avian airlines. Wada discovered the snails’ odd travel plans after finding undamaged shells in bird droppings. When he fed 174 live snails to Japanese white-eyes and brown-eared bulbuls, around 15 percent of them lived. “One of the snails even gave birth just after passing through the gut,” Wada says. The snails probably survive because of their small size, averaging less than a tenth of an inch in length, and compact shells. Wada suspects that they shield themselves with mucus or seal the gap between their body and shell to prevent digestive fluids from seeping inside.

Now, Miura has shown that other snails have used birds to spread over greater and seemingly impassable distances. He collected snails from both sides of North and Central America and used their genes to chart their relationships to one another. Miura found that the snails split into two major lineages at the time when North and South America fused together at Panama, separating the Pacific from the Atlantic. You might expect that one lineage hails from each ocean, and you’d be partly right. The Panama land bridge did separate snails into a Pacific group and an Atlantic one. But both groups managed to send delegates to the other. Today, both lineages include snails from both coasts. Miura found that Pacific snails made it into the Atlantic around 750,000 years ago, while the Atlantic snails crossed over around 72,000 years ago. They had to have flown over land. The snails only live in warm areas so they couldn’t have circled round the North American arctic or the South American cape. And their travels long preceded the construction of the Panama Canal in 1914, so they couldn’t have stowed away on man-made vehicles. Instead, Miura thinks that the snails flew inside shorebirds, millions of which share their habitats and regularly fly over Central America. They could swallow and carry the snails just as white-eyes and bulbuls do in Japan. Charles Darwin first suggested the idea that birds could disperse animals like snails over long distances and the horn snails confirm his idea. Still, these cross-ocean snail swaps have only happened twice in three million years, which suggests that they are unlikely events. Even so, the palaeontologist George Simpson once wrote that “a possible dispersal event, however improbable....becomes probable if enough time elapses.” He likened such events to winning a sweepstake. The chances of success are incredibly slim but the payoffs – such as new worlds to colonise – are very big. Reference: Miura, Torchin, Bermingham, Jacobs, Hechinger. 2011. Flying shells: historical dispersal of marine snails across Central America. Proc Roy Soc B http://dx.doi.org/10.1098/rspb.2011.1599For more on travelling snails, see David Winter’s excellent post at Scientific American blogs. Photo by Osamu Miura More on animal migrations: