Across an ocean, round a continent – the epic 10,000km voyage of a humpback whale

On 7 August 1999, a lucky photographer snapped a female humpback whale frolicking off the east coast of Brazil. Two years later, on 21 September 2001, the same whale was caught on camera again, by a tourist on a whale-watching boat. But this time, she was a quarter of the world away, off the eastern coast of Madagascar. The two places where she was spotted are at least 9800 kilometres apart, making her voyage the longest of any mammal. The spots on her tail leave little room for doubt that both photographers had seen the same whale. These spots are unique to individuals in the same way that fingerprints identify individual humans. They form the basis of the Antarctic Humpback Whale Catalogue, an international collaboration between “scientists, naturalists and tourists” headed by Peter Stevick. Together, the members contribute photos of humpbacks around the world, in an effort to track the movements of these majestic animals. 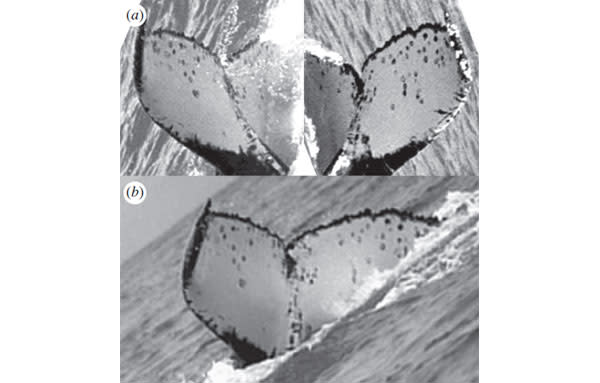 Currently, the catalogue includes over 1,600 whales but Number 1363 – the female photographed off Brazil and Madagascar – is a record-breaker. The photos show that she swam across an entire ocean and around a continent between two locations that are separated by 90 degrees of longitude, quite literally a quarter of the world apart. That’s twice the length of a typical seasonal migration, and it beats the previous record by a humpback by around 400 km. Humpback whales are prodigious travellers and every year, they make substantial journeys between different breeding grounds. But typically, whales move from one breeding area to the next one along. The female that Stevick describes had skipped over several potential sites, including breeding groups in the South Atlantic and just off the east coast of Africa. This mammoth trek is especially unusual for a female whale. Humpback females generally stay within the same breeding area; it’s the males who tend to make the long voyages between them. Indeed, only one other humpback has been identified in both the Indian and South Atlantic Oceans, and it was a male. For a female to strike out over long distances is unusual. The reasons behind her great migration aren’t clear. Perhaps she was taken off course by some navigational error. Perhaps she was simply exploring new territory. Either way, her travels tell us how much we still have to learn about these enigmatic animals. Reference: Biology Letters http://dx.doi.org/10.1098/rsbl.2010.0717Image by Fritz Geller-GrimmMore on whales: