Smell Of Angry Bees Scares Elephants Away From Crops 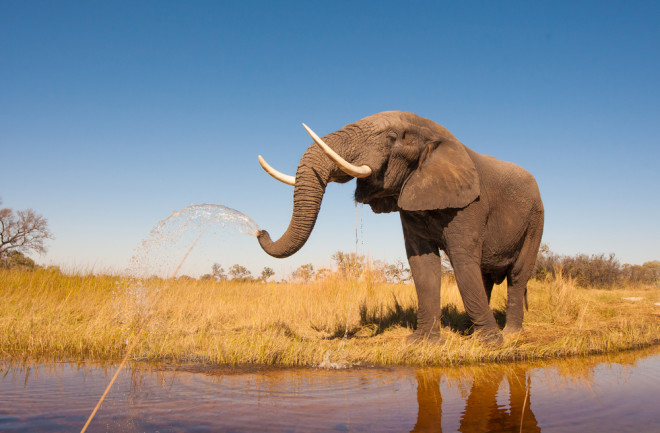 The smell of angry bees could help keep elephants away from crops and reduce confrontations with farmers. (Credit: Donovan van Staden/shutterstock) Throughout Africa and Asia, elephants can be seen as problem causers. The behemoth mammals destroy crops and threaten farmers’ livelihoods when they trundle through fields after tasty snacks. Scarecrows, fences and noisemaking tripwires don’t deter the beasts, and tensions with humans can escalate so much that elephants are sometimes shot. Now, scientists have discovered that the odor of angry honeybees is an effective elephant repellant. The find may offer a way keep the tusked giants out of crops and villages. Farmers in Kenya already knew that honeybees in active hives can stop elephants from breaking fences and protect their crops — the animals hate bee stings as much as the rest of us. And once introduced to the insects, elephants learn to avoid hives and the hum of buzzing bees. But using vast numbers of active beehives around large farms or conservation areas such as national parks is impractical.

Mark Wright, an entomologist at the University of Hawaii in Manoa, wanted to find a better way to deter elephants and reduce human wildlife conflict. So, he took advantage of bee biology. When honeybees get agitated or sense a threat to their hive, they release chemical alarms that set guard bees on attack. Since elephants have a keen sense of smell, Wright wondered whether the animals would detect the insect pheromones and avoid areas fragrant with the aroma of keyed up bees. Wright and his team created a synthetic blend of bee alarm chemicals dubbed SPLAT, or Specialized Pheromone and Lure Application Technology. Although 23 compounds make up the pheromone bees release when distressed, the researchers used the two that provoke bees the most. Then they applied SPLAT, or a control mixture without the maddening chemicals, to stones that they wrapped in white socks and set up around a waterhole elephants frequented in the Associated Private Nature Reserves of Greater Kruger National Park in South Africa. When the elephants came for a drink, the scientists recorded their behavior. Why white socks? “We wanted to actually see them go towards something, and then [observe] what they did,” says Wright. And elephants are a curious bunch. As they walked toward the waterhole, they noticed the out-of-place object. If the socks held treated stones, the elephants swung their feet and raised their trunks, signs of uncertainty and concern. Then they’d turn away and avoid it. The pheromone repelled 86% of elephants at one site, the team reports today in Current Biology. In contrast, 0% of elephants there found the control mix revolting. Some even nestled the control socks with their trunks.

Whether the elephants found the bee odor repellant is likely a learned behavior. For elephants that probably hadn’t encountered bees before, the insect’s chemical smell repelled fewer elephants, only 64 percent displayed signs of hesitation and avoidance. “We had no idea initially if the elephants would respond at all,” says Wright. But their results do show that an insect’s chemical signal has the power to keep Earth’s largest land mammal at bay. Still, the work is a first step, he says. He’d like to figure out the best way for farmers to deploy the pheromones. Perhaps applying it to fences or vegetation — not white socks — for example. He’d also like to know how long the repellant might last and whether elephants will become accustomed to the smell. It’s possible that reinforcement with live bees and hives becomes necessary, he says. Though he hopes the pheromone might provide an affordable option to help keep elephants out of crop fields and villages, he emphasizes that it is one component of an integrated approach, not a silver bullet. “Farmers need as many different options as one can use to manage animal movement,” he says.