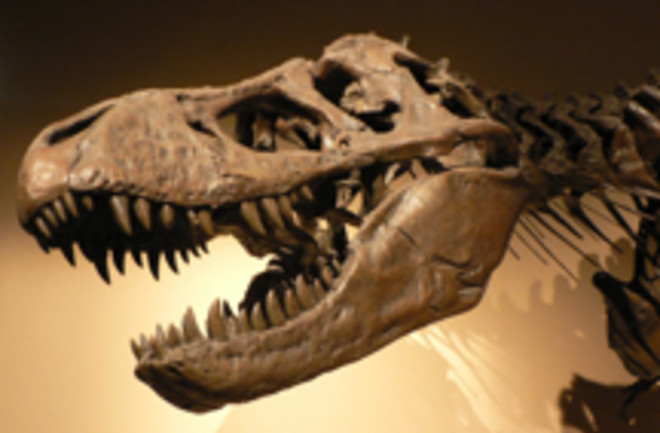 In 2005, researchers made headlines when they reported that they had found intact blood vessels from a 68-million-year-old Tyrannosaurus rex. The discovery raised hopes that paleontologists could get their hands on the flesh and blood of vanished animals. This week, however, other scientists challenged the results, arguing that the dinosaur flesh was in fact just coatings of young bacteria. But the original researchers stand by their results, calling the new argument weak. "There really isn't a lot new here," says Mary Schweitzer of North Carolina State University in Raleigh.

That's the opening for my story in today's issue of Science on the slime vs. dinosaur controversy triggered by a paper that appeared Monday in PLOS One. I've posted the whole thing here. This sort of story is a bit maddening to write. When I contacted outside experts to comment, I got lots of thoughtful, detailed responses pro and con--which I then promptly squeezed down to a handful of words. The quotations may leave people with the impression that the scientists were being dismissive or too eager to accept the paper or otherwise less than careful in their arguments. And then there were some people who kindly gave me their thoughts, which I didn't even mention in the article. Ugh. PLOS One encourages full, open discussion of their papers, so I'm going to post lengthy excerpts from the clashing emails I got from some of the sources below. Maybe this will be of interest only to die-hard biofilm and dinosaur nuts (you know who you are), but it may give you a feeling for how complicated these debate can get beyond short news articles. Plus, I figured I might as well take use some of Discover's hard drive space. [Bold-facing is mine.] First up for the doubters, Frances Westall, an expert on fossil biofilms.

There are a number of misinterpretations and lack of basic data in this paper. In the first place, it appears that the bone material was extracted from depth (although little information is provided about the actual context of the bones). How could “swimming bacteria” infest the bones if they were not in a watery medium but rather “buried at depth? What is the composition of the biofilms? We are shown FTIR spectra but there is no indication of peak identification. Since EDX was available, surely the authors made elemental analyses of the biofilms. What is their composition?? Pyrite framboids are common occurrences in degraded organic matter, their presence relating to the activities of anaerobic microorganisms such as sulphur reducing bacteria. If the biofilm is modern, this implies that there was previously reducing microbial activity before the formation of this film. Is it not more reasonable to hypothesise the formation of a microbial biofilm at the same time as diagenetic degradation of the organic matter within the dead dinosaur in anaerobic conditions? What is the history of the dinosaur bones after death of the animal?? This is important information for interpreting the post-death alterations that could have taken place. The superb preservation of soft body parts by fossilised microbial biofilms is a well known phenomenon. For instance, the wonderful fossils found in anoxic volcanic lake sediments at the Messel and Enspel sites in Germany are phosphatised microbial biofilms that grew on the soft body parts. (I don’t have the references with me as I am on travel but here is one and there are the original references within this article (it is in English): Liebig, K., Westall, F., And Schmitz, M., 1996., A study of fossil microstructures from the Eocene Messel Formation using transmission electron microscopy. Neues. Jh. Geol. Paläont. Mh., 4, 218:231) . If we were provided with the compositional information for the biofilms, it would be easier to interpret the data. Moreover, the filaments and spheres in the “osteocytes and lacunae” may be mineralogical in origin. The resolution of the images is insufficient to determine structure and no EDX elemental data are presented. Although the material was apparently dated as being modern, if the filmy structures are really microbial biofilms, they are more likely to be as ancient as the dinosaurs. The “modern” date could be due to recent contamination (obviously the dinosaur bones have been handled quite extensively since their retrieval; also lying around in museum drawers or shelves is sufficient for contamination). In conclusion, the hypothesis that the soft body parts in dinosaur bones and the like could be microbial biofilms rather than the original structures is a tenable hypothesis; such phenomena are common in specific diagenetic environments. However, the authors fail to demonstrate that the biofilms are modern contamination from “swimming bacteria” and their arguments are not sufficient to refute the studies of Schweizer et al. on an exceptional event.

Now for a couple backers of the paper. David Martill of the University of Portsmouth generally supports the paper, although he believes the original researchers probably found some genuine dinosaur proteins, if not entire chunks of tissue.

This piece of work demonstrates just how careful we have to be when attempting to analyse fossil bones for traces of original molecules or biomarker molecules. It seems that bacteria have the ability to get into the tightest of spaces and play havoc with the original biomaterials. Not only that, but they can do it at any stage in the fossilization process from the moment of death (of a dinosaur say) to the moment of discovery. I recall finding mould on a fossil insect from Brazil where contaminant fungi produced fruiting bodies over the fossil as it was still stuffed full of useable nutrients. Elsewhere on the slab there were only filaments of the fungus.. but oh boy did they hit it big time on the fossil. Although this revelation (only really proven because these bacteria were recent and hence could be carbon dated), may seem like a major set back, we shouldn't loose heart and molecular palaeontologists should persist with their search for the elusive molecules of these long dead animals. But we will have to be much more careful with our analyses, and before we jump to conclusions, we must double and triple check that we are not dealing with contaminant molecules.

Also backing the paper is David Gillan of the Free University in Belgium:

I read the report published by Kaye and colleagues in PLoS One in July 2008 and I fully agree with their conclusions. I am not an expert in dinosaur bones, nor in mineralogy, but to my humble opinion of microbiologist, the presence of bacteria in the bones may explain the structures observed. After the death of the dinosaur most of the flesh would have been completely digested by aerobic heterotrophic microorganisms. However, the inside of the bones is a particular micro-environment : it is filled with organic matter with a lot of red blood cells containing iron. After the death of the dinosaur I can imagine that the interior of the bones would have become anoxic. In such conditions, sulphate reducing bacteria (SRB), which are very abundant in the environment, were able to produce hydrogen sulphide (H2S) while degrading the organic matter (most of the H2S in the sedimentary environment is produced by SRB). This degradation liberates the iron that is complexed to the organic matter. This was shown in one of my papers, in which a living biofilm precipitated iron oxides using Fe(III) organic complexes (Gillan et al. 2000, Geomicrobiol J. 17:141-150). The result of this iron liberation, together with the H2S produced inside the bone by bacteria, is the precipitation of iron sulphides (and/or pyrite) and the formation of framboids. Later, during diagenesis, iron sulphides of the framboids may have been oxidized and replaced by iron oxyhydroxides. Schweitzer and Horny (1999, Ann. Paleontol., 85: 179-192) have discovered iron and oxygen-rich microstructures in the bone tissues of Tyrannosaurus rex but rejected the structures as framboids due to their composition of iron oxides. However, Sawlowicz and Kaye have documented various stages of framboidal pyrite replacement by oxides in dinosaur bones (Mineralogia Polonica Spec. Pap. 29, 184-187). So the ‘‘dinosaurian soft tissues" observed in the bones are probably best explained as bacterial biofilms that are very common throughout nature.