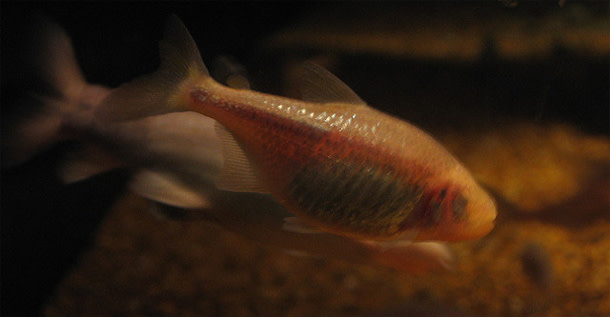 Caves are dark, sheltered and often quiet. They’re seemingly ideal places for a bit of a nap. But for a small Mexican fish, they have done exactly the opposite. As a result of life in dark caves, the blind cavefish has evolved sleeplessness, on at least three separate occasions. They don’t go entirely without sleep, but they doze far less than their surface-dwelling relatives. The blind cavefish (Astyanax mexicanus) is a sightless version of a popular aquarium species, the Mexican tetra. They live in 29 deep caves scattered throughout Mexico, which their sighted ancestors colonised in the middle of the Pleistocene era. In this environment of perpetual darkness, the eyes of these forerunners were of little use and as generations passed, they disappeared entirely. Today, the fish are born with eyes that degenerate as they get older. Eventually, their useless husks are covered by skin. They went through other changes too. For example, their skin lost its pigment so they are all pinkish-white in colour. And now, Erik Duboué from New York University had found that they also sleep less than their relatives on the surface. Duboué works in the lab of Richard Borowsky, who has been studying the blind cavefish for years. The duo noticed that the captive cavefish in their laboratory were surprisingly active at night, and they wanted to know if they didn’t sleep as much. How do you work out if a fish is asleep? Duboué did it by basically poking them and seeing how long it took them to respond. He found that the fish reacted far less strongly to a gentle poke if they hadn’t moved very much for a minute. At this point, he classified them as “asleep”. Duboué compared blind fish from three separate caves - Pachón, Tinaja, and Molino – as well as one of their sighted surface cousins. He found that the surface fish sleep for an enviable 13 hours a day – mostly at night, with the odd afternoon nap. The cavefish, on the other hand, sleep for just 2-4 hours a day. When they do fall asleep, they’re just as heavily under as their surface cousins, and their movements slow to the same extent. They’re not lighter sleepers – they just get less of it. The cavefish are a fantastic example of convergent evolution, where populations take different routes towards the same suite of adaptations. The Pachón, Tinaja, and Molino cavefish all entered separate cave systems that aren’t connected to one another. They lost their sight, and their sleep, independently of one another. These separate paths became abundantly clear in 2008, when Borowsky bred blind cavefish from different populations and produced youngsters that could see! In a single generation, he managed to reverse a million years of evolution. Borowsky succeeded because the different groups of blind cavefish lost their eyes through different genetic changes. In any one lineage, these changes work together to nix the development of the growing eyeball. But in the hybrids, every altered gene inherited from one parent was compensated by a normal copy from the other. Duboué and Borowsky wanted to see if they could breed cavefish with normal sleeping patterns in a similar way. When they bred Pachón or Tinaja cavefish with surface fish, he found that the hybrids still didn’t sleep very much. When they bred the hybrids with more surface fish, they produced some youngsters that nodded off for long surface-style hours, and some whose sleeping patterns were half-way between the two extremes. This suggests that the shorter snoozes of the cavefish are driven by a combination of altered genes, some of which have dominant effects. Borowsky’s next mission is to find which genes – they might also control the sleeping patterns of humans and other animals. For now, the team doesn’t know why the cavefish have evolved to catch ten winks instead of the standard forty. After all, sleep is important. Aside from the fact that animals perform better if they are well-rested, experiments on humans and fruit flies have shown that sleep is important for solidifying memories. There’s no reason to think that cavefish have less need of alert brains or lasting memories. Instead, it’s possible that they simply cannot afford to sleep any more than they do. They live in realms where food is a rare commodity, and they might need to be constantly on the lookout for it. It will be interesting to see if other cave-dwellers share the same adaptations. After all, many other cave species, or troglobites, share the degenerated eyes, pale skin and heightened senses of the cavefish. In these dark worlds, convergence is king. On that note, as I write this, the time is 1.30am and I am in a dark living room lit only by a dim energy-saving lightbulb. I need to be awake in five hours. See? Convergence... Reference: Duboue, Keene & Borowsky. 2011. Evolutionary Convergence on Sleep Loss in Cavefish Populations. Current Biology ref tbc Image by skpyMore on cavefish: