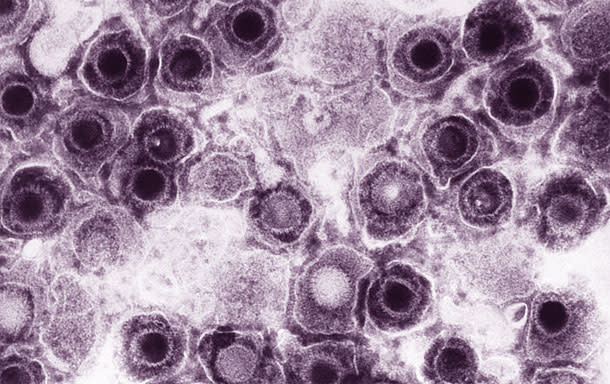 HIV – the virus behind AIDS – is the most diverse of all viruses. Once it infects someone new, it mutates so rapidly that it can spawn a million genetically different strains in just a few months. This evolutionary onslaught overwhelms the host’s immune system, and creates big problems for any scientist trying to create a cure or a vaccine. By evolving so quickly, HIV turns itself into a million moving targets. But when HIV jumps from one individual to another, something odd happens. The virus still mutates at a breakneck speed, but it does so 2 to 6 times more slowly than within any single person. Unexpectedly, the virus seems to evolve faster in a single host, than in a population. There are three possible explanations for this puzzling trend, but Katrina Lythgoe and Christophe Fraser from Imperial College London think that only one is correct. They think that the ancestral strain – the one that kicked off someone’s infection – is more likely to spread to other people than its millions of descendants. The progeny of the ancestral virus quickly evolve to avoid their host’s immune system and reproduce as rapidly as possible. But Lythgoe describes this as “short-sighted evolution”. As the viruses become better at growing within someone, they lose the ability to spread between people. “What is good for the virus in the short term (growing in a host) is not necessarily what is good in the long term (infecting the most people),” says Lythgoe. Three ideas The ancestral strain made no such trade-off. It was already well adapted to spread between hosts, and it never lost that ability. When the infection began, some of these viral forerunners infiltrated the genes of long-lived cells, lingering there for months or even years. They created a long-term archive of historical strains that went unchanged while their daughters and granddaughters diversified furiously around them. They can pop out at any time to infect a new host, in a process that Lythgoe and Fraser call “store and retrieve”. It’s the equivalent of starting a video game from an earlier save file, or rewriting a book from an initial draft. It’s easy to see how “store and retrieve” could explain HIV’s mismatched evolutionary rates within and between individuals. There are two other possible explanations. The first, known as “stage-specific selection”, assumes that the virus is more likely to spread during the early stages of infection. The immune system hasn’t had time to mount a strong defence against the newfound threat, so there’s little pressure for the virus to evolve counter-measures. Only later, when the immune system gets into the game, does HIV ratchet its evolution into high-gear. And before this happens, the virus has already spread to a new host. The second possibility, known as “adapt and revert” says that the virus rolls back to an earlier state when it enters someone new. Mutations that give it an edge against one immune system might leave it weak against another. To avoid evolving into a corner, it reverts to an earlier form and starts adapting anew. But by studying the types of mutations in HIV, Lythgoe and Fraser think that neither of these explanations works. Genes contain instructions for making proteins. Genes can either pick up “synonymous” mutation that doesn’t don’t change the structure of the resulting protein, or “non-synonymous” mutations that do. The synonymous ones largely go unnoticed; the “non-synonymous” ones have more important effects, and tend to be the basis of adaptive changes. If the stage-specific selection idea was correct, you’d expect the mismatch in evolutionary rates to be greatest for non-synonymous mutations. These would accumulate rapidly as the virus evolves within a host, but slowly as it spreads between them. The same can be said for the adapt-and-revert model. But this isn’t the case. Instead, the mismatched rates apply to both types of mutations. Only the store-and-retrieve idea can account for this pattern. What this means This discovery isn’t just an academic exercise. It could have important implications for efforts to control HIV. For example, the ancestral strains that perpetuate epidemics are likely to share features that make them more transmissible. By targeting these features, scientists may be able to design more effective vaccines against HIV. “The successfully transmitted viruses will still be diverse, but the shared characteristics could be exploited,” says Lythgoe. It could also have implications for a strategy called “pre-exposure prophylaxis”, where healthy people take drugs for treating HIV, to prevent future infections. There’s a risk that this strategy might speed up the evolution of resistance to important drugs, but many scientists think that this is unlikely. If someone became infected with a resistant strain, they would stop taking the drugs and the virus would quickly evolve to abandon its resistance. This is because drug resistance usually comes at a cost, so the virus will jettison it if it’s no longer necessary. But in this scenario, Lythgoe says that the ancestral virus would still be resistant to the drugs, and would be more likely to spread than its susceptible progeny. Over time, this might slowly ratchet up the proportion of resistant viruses around. “This is an untested hypothesis,” says Lythgoe. “Without modelling, it is impossible to know how strong this effect will be. We are developing a model to test this prediction at the moment.” Reference:  Lythgoe & Fraser. 2012. New insights into the evolutionary rate of HIV-1 at the within-host and epidemiological levels. Proc Roy Soc B http://dx.doi.org/10.1098/rspb.2012.0595Image by Fred MurphyMore on HIV: