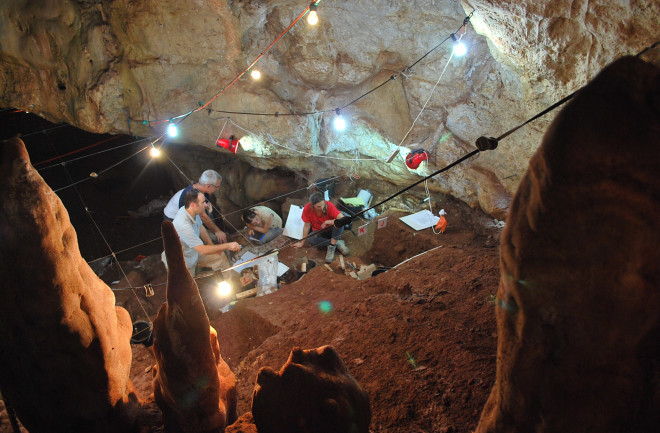 The excavation site at Manot Cave in western Galilee. (Credit: Israel Hershkovitz, Ofer Marder & Omry Barzilai) A 55,000-year-old human skull found within a cave in Israel could be evidence that modern humans and Neanderthals were close to each other. Very close. Scientists believe anatomical features of the partial skull, found in Manot Cave in western Galilee, indicate modern humans and Neanderthals may have interbred 50,000 to 60,000 years ago in the Middle East. Scientists believe this skull could be one of the missing links between African modern humans and European hominids. "Manot clearly shows that Neanderthals and modern humans lived side by side in Israel for a long period of time," co-author Israel Hershkovitz of Tel Aviv University told

The skull, named “Manot 1” after the cave, is thought to be a female’s and was discovered back in 2008. Since then, scientists have rigorously analyzed Manot 1 and published the results of their investigation Wednesday in the journal Nature. Scientists believe the Manot people could be related to the first modern humans who later colonized Europe. Genetic and archeological models have previously predicted interbreeding between modern humans and Neanderthals. About four years ago, scientists compared the genomes of five living humans from China, France, Papua New Guinea, southern Africa and western Africa. They found that humans carry, at a minimum, 1-4 percent Neanderthal DNA in our genomes. Neanderthal remains dating back 50,000 to 65,000 years have also been found at other sites near Manot Cave. Manot 1 is the first recorded evidence that modern humans were living in the same place, at the same time, as Neanderthals. Speaking to the

Eric Delson, a paleoanthropologist at Lehman College of the City University of New York, said, “This fossil fits previous predictions, which is a nice rarity in our field.”

Scientists don’t want to draw too many conclusions from Manot 1 — after all, it’s just one skull. They aren’t sure if Manot 1 is a hybrid between Neaderthals and modern humans, or just an individual anomaly. But whoever Manot 1 was long ago, she was likely among the early generations of humans that left Africa to eventually colonize Europe. That alone is a story worth telling.