New Scientist's Feedback section has a running series of items on "nominative determinism", that strange phenomenon where a person's bears eerie witness to their occupation, such as a neurologist called Lord Brain, or an article on urology authored by Splatt and Weedon. Well here's another example for them - a new paper about a singing fish from a scientist called Bass.

Beyond the wall-mounted horrors of Big Mouth Billy, fish are not exactly known for their vocal stylings, but one group - the toadfishes and midshipmans - are very noisy indeed. They make a range of dull grunts and hums by vibrating their swim bladder, the same organ that keeps them afloat.

In the Trials of Life, David Attenborough tells the story of an entire bay in America whose residents were infuriated by a bizarre throbbing noise that permeated their homes and drove them up the wall. The source was eventually discovered by a marine biologist, who played recordings through an underwater microphone and attracted female toadfishes in droves. It was the amorous males that were responsible, and their sexy songs were the cause of all the ruckus.

Now, Andrew Bass at Cornell University has shown that the tunes of these aquatic loudmouths are driven by a set of neurons that are shared by all vertebrates. This 'vocal motor nucleus' was most likely present in the last common ancestor of the entire group and evolved more than 400 million years ago. Since then, it has driven all manner of social communication, from the beautiful songs of birds, to the duller hums of toadfishes to the even more distressing warbling of the Spice Girls. 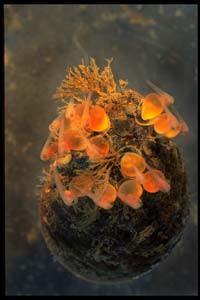 The toadfish's brain contains a circuit of rhythmically firing neurons that contract the muscles attached to its swim bladder. These muscles are some of the fastest of any vertebrate and the rate at which they contract determines the pitch and length of the fish's tunes. Together with Edwin Gilland and Robert Baker, Bass mapped this vocal circuit as it developed in toadfish larvae.

The trio used fluorescent dyes to label the neurons in question as they developed and connected to one another. The dyes illuminated a specific region where the back of the fish's brain meets the top of its spinal column. In all vertebrates, this hindbrain is divided into eight sections called rhombomeres. The last of these - rhombomere 8 - is thought to be the source of the neurons that power the calls of all vocal vertebrates. Bass's dyes revealed that the same is true of toadfish.

In fact, the blueprint of the vocal circuit in the larval toadfish closely matched the pattern of equivalent neurons in the brains of birds, frogs, amphibians and mammals, including humans. He concluded that this circuit is an shared evolutionary hand-me-down from our last common ancestor. Among different modern groups, there are certainly differences in the network's complexity, but its basic structure has been remarkably preserved across evolutionary time. 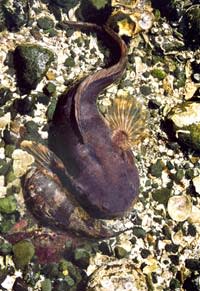 Bass notes that the vocal systems of vertebrates are a mish-mash of shared components and innovative ones. The vocal circuit was certainly present in our last common ancestor, an animal that existed several million years ago before the transition to land. But the organs that generate the noise, the muscles that power them and the nerves that contract the muscles have all evolved independently on at least three separate occasions. These bursts of innovation have co-opted the same vocal circuits to drive the swim bladder of toadfish, the syrinx of birds and the voice box of mammals and amphibians.

Darwin himself, prescient as always, had this to say about singing male fish:

"When the primeval members of this class [the vertebrates] were strongly excited and their muscles violently contracted, purposeless sounds would almost certainly have been produced; and these, if they proved in any way serviceable, might readily have been modified or intensified by the preservation of properly adapted variations."