Shy Crabs Make the Most Sperm 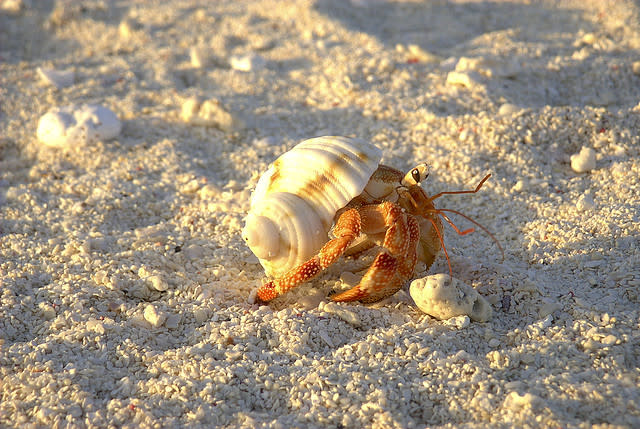 A fellow who hides in his shell until danger has passed may not seem like the epitome of manliness. Yet among hermit crabs, the shyest males have the most to offer the ladies. It's all part of their evolutionary strategy. Crabs that are long on bravery, meanwhile, are short on sperm. Mark Briffa, an animal behavior professor at Plymouth University in the United Kingdom, and his colleagues found the surprising connection between sperm and shyness while studying "life history" in crabs. To a biologist, life history doesn't mean the material for an animal's tell-all memoir. Instead, it means how organisms invest their resources. Living things only get a limited budget of food and energy—so is it better to spend that energy growing big and strong, or searching for a mate? Making sperm or eggs, or building large claws or horns to fight off enemies? The researchers already knew hermit crabs have personality. A little, anyway. Some crabs are bolder, while others spend more time tucked in their shells. And the researchers wanted to know how these personality traits relate to the rest of a hermit crab's life-history strategy. Usually, they explain, bolder animals have more reproductive success. They follow a sort of "live fast, die young" plan: if you have the resources, spend them on running around and mating. When you're eaten by a seagull, at least you'll leave some young behind. To test this in hermit crabs (Pagurus bernhardus), the scientists collected 53 male animals from rocky shores in the United Kingdom. They brought the crabs back to tanks in the lab. Then, once a day for eight days, they startled the crabs. A researcher would remove a crab from its tank, flip it upside down, and replace it. This made the animal retreat into its shell. Then the researcher counted the seconds until the crab mustered up its courage and got its legs back on the ground. The researchers also weighed the crabs without their shells and measured their levels of hemocyanin, a molecule that carries oxygen in the blood. Crabs with more hemocyanin have better aerobic endurance, which might help them when fighting a rival. Finally, the researchers peeked inside the crabs' gonads and examined their tube-shaped bundles of sperm, called spermatophores. To the scientists' surprise, the crabs showed exactly the opposite pattern from what they expected. A bold crab wasn't the best catch for a mate. Instead, the most timid crabs had the largest spermatophores. These crabs also had higher levels of hemocyanin, suggesting that they were in good physical shape. These were the males with the most resources to spend. But instead of "live fast, die young," they were employing a different strategy. More like "stay safe and protect your giant sperm packages." Male hermit crabs who are the richest in resources seem to invest those resources in building big spermatophores. But they don't run around looking for mates or fights. Rather, they live cautiously. They make sure their investment is secure until they can (ahem) deposit it in a female. When the braver crabs fail to leave behind any babies for the next generation, they won't look so impressive anymore.