Shut up and pet me! Dogs prefer petting to vocal praise. 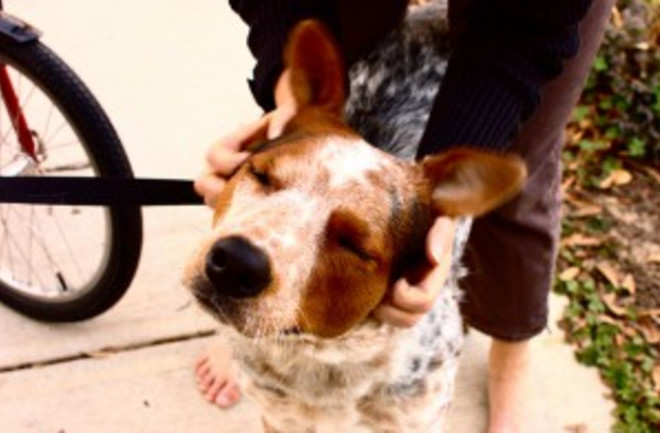 It's probably no surprise that dogs like to be petted. But do they prefer petting over other types of attention? Here, two scientists from the University of Florida tested whether dogs would prefer to be petted or given vocal praise, and whether it mattered if the petting/praise came from an owner or a stranger. Turns out that dogs love pets, regardless of who is doing the petting, and they never seem to get tired of being petted. Interestingly, a previous study by the same authors found that dogs do like one thing even more than petting: food. Perhaps a future study will determine where chasing their tails ranks on the list?

Shut up and pet me! Domestic dogs (Canis lupus familiaris) prefer petting to vocal praise in concurrent and single-alternative choice procedures. "The nature of the interactions that maintain the social behavior of dogs towards humans and which interactions dogs prefer have not been thoroughly investigated. We focused here on dogs' preference for petting and vocal praise, and the influence that familiarity (owner vs. stranger) has on that preference. We first used concurrent choice to evaluate dogs' preference for petting or vocal praise and measured the initial choice, the time spent with each alternative, and the number of within-session alternations. We assessed dogs' preference for petting or vocal praise in 1) shelter dogs, 2) owned dogs with strangers providing both interactions, and 3) owned dogs with the dog's owner providing the interactions. Across all experimental groups, dogs preferred petting to vocal praise. We next assessed time spent with each alternative when only one alternative was available at a time in shelter dogs and owned dogs (Experiment 2). Shelter dogs were tested with a stranger and owned dogs were tested with their owners providing the interaction. Dogs alternated between petting and vocal praise, vocal praise and no interaction, or received only petting for eight 3-min sessions of each comparison. Both shelter and owned dogs spent significantly longer in proximity to the experimenter when the interaction was petting compared to vocal praise. Vocal praise produced as little proximity-seeking behavior as did no interaction. Additionally, dogs did not show any sign of satiation with petting across all eight sessions. Overall, petting seems to be an important interaction between dogs and humans that might maintain inter-specific social behavior but vocal praise likely has to be specifically conditioned." Related content: NCBI ROFL: Dogs catch human yawns.Yes, dogs really can feel jealous.Flashback Friday: Worst scientific job ever? Doggy breath odor judge.