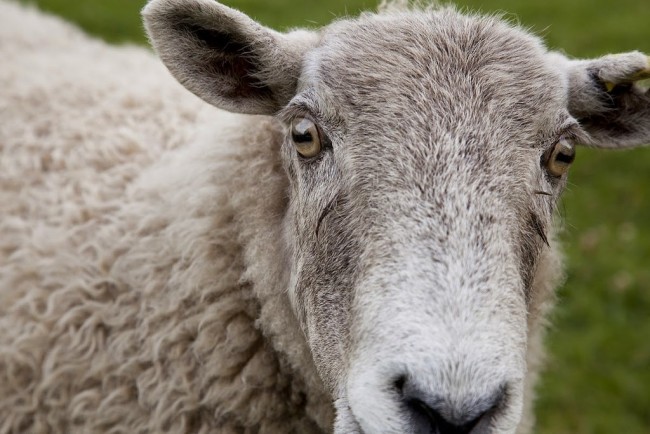 How do you know when a farm animal is unhappy? Animal welfare researchers wish they had easy ways to measure malaise in pigs, or stress in cows. But those tools are lacking—which is why scientists in Australia studied sheep they'd dosed with Valium. "Animals are not able to talk to express their emotions," says Caroline Lee, an animal welfare scientist at CSIRO in New South Wales. "We need to use other ways of understanding how they are feeling." One such way is to look for changes in behavior that give away an animal's mood. For example, when humans are feeling anxious, we pay more attention to things that seem threatening. Scientists call this an "attention bias." If farm animals do the same thing, then testing how attentive they are to threats could be a simple way to measure how anxious they are. Lee and her coauthors tested this idea with 60 female Merino sheep. They divided the sheep into three groups. A control group went through the experiment with only their natural level of anxiety. The researchers artificially increased the anxiety of the second group of sheep by injecting them with methyl-chlorophenylpiperazine or mCPP—a drug that "has been reported to induce anxiety in a range of species," they write. The third group of sheep got a relaxing shot of diazepam, also known as Valium. For testing, each sheep was led into a walled yard with a food bucket sitting in the middle. A window in one of the walls revealed a dog sitting quietly outside. After 10 seconds, the window was shut so the sheep couldn't see the dog anymore. Each sheep stayed in the yard for about three minutes while video cameras recorded its behavior. Every sheep except one froze when it saw the dog. But the scientists were more interested in what happened after the window was shut. Sheep in the control group spent about 22 seconds staring in the direction of the window after it was closed. Sheep injected with the anxiety-increasing mCPP spent almost 40 seconds like this. But sheep injected with the anti-anxiety drug stared for just 14 seconds, on average, before moving on with their lives. More than half of the diazepam sheep then ate from the bucket. Hardly any control sheep could bring themselves to eat, though–and none of the high-anxiety sheep ate a bite. The more anxious a sheep felt, the more attention it paid to a perceived threat. In the experiment, that anxiety (or lack of anxiety) was drug-induced. But the researchers say the results could provide a new way to measure the anxiety sheep feel from their everyday experiences. Testing an animal's attention bias is quick, and doesn't require a person to have prior training, Lee says. "So it could potentially be used on a farm as a practical indicator of animal welfare." As for the drugged sheep, researchers checked on the animals over the next week and found no long-term effects of their pharmaceutical adventures.