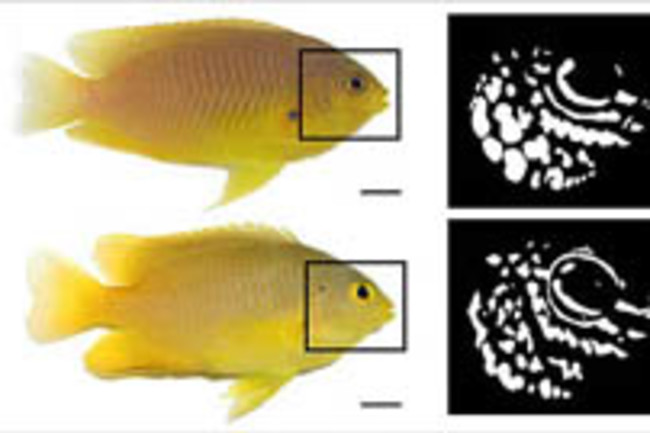 We know that there's a whole spectrum of different wavelengths of light beyond the puny band of visible light we humans can see. And we knew that some animals, like certain species of fish and birds, have vision that extended beyond ours into wavelengths like ultraviolet. But a new study in Current Biology demonstrates that not only can damselfish see in UV, but that they can discern specific patterns in UV light, which is much more than we ever gave them credit for.

The findings are the first to show an animal "that is able to discriminate between fine-scale UV patterns using only their short-wavelength receptors (UV cones)," the researchers wrote in their study. These fish seem to use the UV cues to distinguish their own from other similar-looking species [Scientific American]

. Prior to this, many researchers thought the fish's UV vision just allowed them to detect the presence of UV light, and wasn't refined enough to detect any kind of patterns. The team, led by Ulrike Siebeck, made the find by studying two species of damselfish, Ambon and lemon, which have different UV sensitive markings on their faces. When the two species were put together, most of the males Ambons would defend their territory by attacking other male Ambons, but wouldn't pay much attention to their lemon cousins. However,

when the experiment was run with UV filters so the fish couldn't see the UV facial patterns, this same preference for attacking kin wasn't found [LiveScience]

. Without the UV markings, the scientists propose, perhaps the Ambon damselfish couldn't easily tell the nearly identical lemon damselfish apart from its own species. While both these species of damselfish see in UV,

plenty of their major predators, such as wrasses and cod, typically can’t, Siebeck says. So she argues that damselfish could use their spots to send a covert message [Science News]

. UV light also scatters in water more than visible light, so even if predators could see in UV, it wouldn't do them much good from afar. Thus, these UV face markings could be a clever way for the fish to send bright signals to potential mates or rivals without attracting unwanted attention. Related Content: 80beats: Male Cleaner Fish Punish Females Who Piss Off the Boss Fish 80beats: DNA Scanner Proves That NYC Sushi Contains Endangered Bluefin Tuna Discoblog: Was This Fish the Inspiration for Alien? DISCOVER: The Most Important Fish in the Sea DISCOVER: 8 Marine Creatures That Light Up the SeaImage: U. Siebeck et al. / Current Biology 2010