Sharks Terrorize Reef Fish In The Shallows, Changing When And Where They Eat Seaweeds 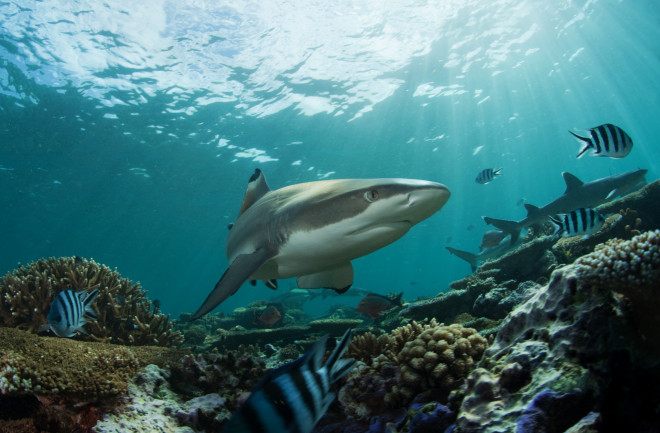 A seascape of fear? New study suggests fear of sharks shapes ecosystems. Photo Credit: Narchuk/Shutterstock It's kind of incredible how our fears can shape our behaviors. When Jaws was released in 1975, it fundamentally changed how we interact with sharks. In the years that followed, we hunted these large marine predators more intensely, and came to view them as terrible monsters—attitudes scientists still fight to this day. But while our fears are largely unfounded, there are lots of species that have good reason to be wary of these awesome fish. Scientists have now discovered that such fear can ripple through the reef ecosystem, impacting community structure all the way down to seaweeds. There's no doubt that sharks can be a bit terrifying, especially if you're a snack-sized fish. Scientists have long suspected that such fear can alter behavior. Just like people that are scared of sharks avoid beach vacations, preyed upon fish might try to avoid areas where sharks roam in the hopes of steering clear of those sharp, pointy teeth. And where the fish avoid, the species they eat proper, a marine version of 'when the cat's away, the mice will play.' Thus by creating landscapes of fear—or, in this case, seascapes—sharks could shape entire ecosystems even if the amount of prey they actually consume is negligible. Cascading effects have been shown for other predators. The mere sound of dogs barking can terrorize raccoons so much that they forget to eat. And when that happens, the myriad of species the raccoons hunt, from birds to crabs, flourish. But overall, demonstrations of the 'landscapes of fear' hypothesis are rare. Not only do we not know how fear of sharks might shape marine habitats, our overall understanding of how sharks interact with other species is lacking. Despite our annual fin-fests and obsession with these fearsome fish, “we still only have a very basic understanding of their ecological roles in nature,” said Doug Rasher, a senior research scientist at Bigelow Laboratory, in a press release. So he and his colleagues decided to look a little closer, zeroing in on the impacts of sharks on shallow reef habitats off the coast of Fiji.

A diagram of the shallow lagoons studied. Figure 1 a and b from Rasher et al. 2017. The well-lit, shallow lagoons of Fiji's largest island, Viti Levu, are ideal habitat for tasty seaweeds like Turbinaria conoides, a favorite of herbivorous fish. Since the islanders established a no-take reserve protecting the fringing reef of Votua Village, Korolevu-i-wai, in 2002, the abundance of seaweeds has dropped dramatically, particularly in the more isolated back reefs, making room for corals to rebound. But not all areas of the lagoons are equally seaweed-free. The algae remain in the shallowest reef tops. Rasher and his colleagues wanted to understand why. The research team put GoPros in the water to observe which fish were eating algae as well as when and where sharks were moving around the lagoons. They also surveyed for the presence of algae-eating fish during high and low tides, and to determine seaweed location and abundance. In addition, they calculated fish feeding rates on algae in shallow and deeper back reef areas during different tidal phases by deploying measured amounts of algae for the fish to snack on. When they brought all that data together, a clear pattern emerged. The biggest predators like blacktip reef sharks (Carcharhinus melanopterus), whitetip reef sharks (Triaenodon obesus,) and tawny nurse sharks (Nebrius ferrugineus) only entered the back reefs when tides were high—the researchers estimated that on average, each 40 square meter section of backreef is trawled by 4 to 5 reef sharks and 1 jack during each high tide. And when that happened, the herbivorous fishes like unicornfishes (Naso lituratus and N. unicornis) pretty much stopped eating and disappeared, presumably steering clear of the meandering predators. That meant that the shallow reef tops received very little attention by the algae-eaters, as they could only be accessed when the reef sharks entered the shallows to feed. And in turn, those reef tops sported about 20 times the amount of seaweed. The researchers ruled out the possibility that these algae just do better on the reef tops for other reasons, like increased amounts of light, by comparing the growth rates of caged weeds in both areas. So the stark difference between the tops and deeper troughs in the backreef appears to be driven mostly by the fish's fear of sharks. A 2013 study in Shark Bay, Australia, had similar results, finding the risk of tiger shark predation affected the nature and abundance of seagrasses. Combined, they paint a much more interesting picture of the role sharks play in marine habitats. Their effects go far beyond what they consume directly, so their mere presence can "actually shape the way [an ecosystem] looks and functions," explained Rasher. On the practical side, these results suggest that we might be able to reduce our fishing impacts by taking this kind of thing into account. "Our example highlights the need to consider predator effects in ecosystem-based management," the authors write in their conclusions. "With knowledge of predator movements and resultant herbivore migrations, resource managers could mitigate this negative human impact in similar ecosystems by regulating not only where but when herbivores are harvested." And ultimately, they underscore the need to better understand the ecological importance of sharks and other large predators. "Large apex predator sharks as well as the large mesopredator reef sharks studied here are now generally rare or absent on coral reefs exposed to heavy fishing pressure; thus, the effects we documented may already be extinguished from many places," the authors write. "Despite these difficulties, we need to study Earth’s remaining wild places where predators still abound, and capitalize on chance events and variability in nature... Only then can we understand the ramifications of predator loss or recovery."