"He caresses every bottle like it's the first one he's had, saying it ain't love, but it ain't bad." - Ani DiFranco Rejection stinks. It literally hurts. But worse, it has an immediate and negative impact on our brains, producing withdrawal symptoms as if we're quitting a serious addiction cold turkey. It's no wonder, then, that we are tempted to turn to drugs to make ourselves feel better. 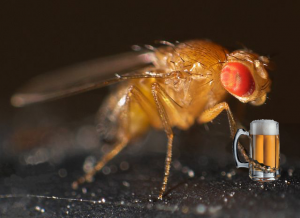 But we're not the only species that drowns our sorrows when we're lonely - as a new study in Science reveals, rejected Drosophila do, too. Scientists have found not only will these sexually frustrated flies choose to consume more alcohol than their happily mated peers, sex and alcohol consumption activate the same neurological pathway in their brains. Drosophila melanogaster males sure know how to woo a lady. When placed in the same container as a potential mate, a male fly will play her a delicate love song by vibrating one wing, caress her rear end, and gently nuzzle her most private of parts with his proboiscis to convince her that he is one heck of a lover. But even the most romantic fly can't convince an already mated female Drosophila to give up the goods, so scientists were able to use the girls' steely resolve to see how rejection affects fly drinking behavior. "Alcohol is one of the most widely used and abused drugs in the world," explains lead author Galit Shohat-Ophir. "The fruit fly Drosophila melanogaster is an ideal model organism to study how the social environment modulates behavior." Previous studies have found that Drosophila melanogaster exhibit complex addiction-like behaviors. So in the controlled setting of Ulrike Heberlein's lab at the University of California San Francisco, researchers paired male fruit flies with three types of females: 1) unmated females, which were willing and happy to mate; 2) mated females, which actively rejected the men; and 3) decapitated females, which didn't actively reject the guys but, well, weren't exactly willing partners either. After the flies were satisfied or frustrated, they were offered regular food and food spiked with ethanol, and the researchers measured which type they preferred to see if there was any connection between sex and drinking. The flies that were rejected drank significantly more than their satisfied peers, but so did the ones paired with incapacitated girls, suggesting that it wasn't the social aspect of rejection but sexual deprivation that drives male flies to increase their ethanol consumption (see the video at the end!). This alcoholic behavior was very directly related to the guy fly ever getting laid, for even after days of blue balls, if he was allowed to spend some time with a willing woman, he no longer preferred the spiked food. What the scientists really wanted to understand, though, was why. What drives a frustrated fly to the flask? So to look at the underlying mechanism of this phenomenon, the scientists examined the flies' brains. A body of scientific literature has connected one particular neurotransmitter, neuropeptide F (NPF), to ethanol-related behaviors in Drosophila, so it was a logical place to start. A very similar neurotransmitter in our brains, called neuropeptide Y (NPY), is linked to alcoholism.

The team found that sexual frustration caused an immediate decrease in the expression of NPF, while sex increased expression. Furthermore, when they used genetics to artificially knock down NPF levels in the satisfied flies, they drank as much as their not-so-satisfied friends. Similarly, when the researchers artificially increased NPF levels, flies stayed sober. This is the first time NPF levels have connected sexual activity to drinking. Clearly, NPF levels controlled the flies' desire to drink, so the team further explored how NPF works in the fly's brain. Many animals, including ourselves, possess a neurological reward system which reinforces good behavior. Through this system, we ascribe pleasure or positive feelings to things we do that are necessary for species survival, including sex, eating, and social interaction. Drugs tap into this system, stimulating pleasure which can lead to addiction. Previous studies have shown that flies find intoxication rewarding, so the researchers hypothesized that NPF may play a role in the reward system. Preference tests showed that artificially increasing NPF levels in the absence of sex or ethanol was rewarding to the flies, confirming the scientists' hypothesis. This was further supported by the discovery that constantly activating NPF abolished the flies' tendency to consider ethanol rewarding. "NPF is a currency of reward" explains Shohat-Ophir. High NPF levels signal good behavior in Drosophila brains, thus reinforcing any activities which led to that state. This is a truly novel discovery, for while NPF and the mammal version, NPY, have been linked to alcohol consumption, no animal model has ever placed NPF/NPY in the reward system. Understanding the role of NPF in reward-seeking behaviors may lead to better treatments for addicts. "In mammals, including humans, NPY may have a similar role [as NPF]," says Shohat-Ophir. "If so, one could argue that activating the NPY system in the proper brain regions might reverse the detrimental effects of traumatic and stressful experiences, which often lead to drug abuse." Already, NPY and drugs that affect the function of its receptors are in clinical trials for anxiety, PTSD, mood disorders and obesity. This study suggests that perhaps they should be tested as treatment for alcoholism, too, as well as other reward-based addictions. 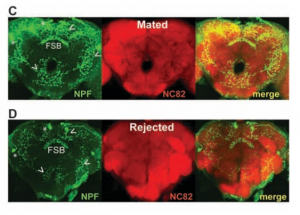 This sequence of three videos shows a male fly courting and successfully mating with a female fly, another male fly being rejected by a female, and a male choosing to consume an alcohol-infused solution over a non-alcohol solution. Video © Science/AAASImages: