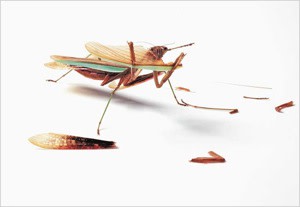 This female praying mantis is finishing up the last tasty bits of the male that just mated with her. In the lead article in tomorrow's science section of the New York Times, I talk to scientists who study females of some species that sometimes devour their mates. Sexual cannibalism is not common, but it is revealing. The evolutionary forces that shape the sexes can drive them into some extreme conflicts, even turning one sex into a meal for the other. In some cases, males actually become partners in their own demise--passively or complicitly. A new study indicates that male praying mantises are not so willing. They can tell when females are hungry, and they take extra precautions. I focus on new research in my article, but the history of sexual cannibalism is just as interesting. Scientists have been debating the nature of sexual cannibalism for over twenty years, and their debates capture one of the biggest struggles over how to study evolution. I could only touch briefly on this history in the article, so let me explain here what I mean... By the late 1970s, a fierce public divide had emerged between some leading evolutionary biologists. They were divided over how to understand the evolutionary history of adaptations. Some--call them adaptationists if you want--argued that much of what we see in animals and other organisms is the finely-tuned product of natural selection. Others--call them exaptationists--argued that evolution is not so free. It works within lots of constraints and is dominated by unpredictable contingencies. If you want to look to an articulate, prominent advocate of each view, look to Richard Dawkins for the adaptationists, and the late Stephen Jay Gould for the exaptationists. (This conflict even spawned a book called Dawkins vs. Gould.) What gave this debate a special kick was its implications for human nature. Adaptationists saw in psychology a collection of behaviors selected and honed for reproductive success. Exaptationists saw this approach as as nothing but a fancy rationalization for justifying entrenched social injustice. Stephen Jay Gould took advantage of his monthly columns in Natural History from 1976 to 2001 to champion the exaptationist case. One tactic he frequently chose was to pick out a recent adaptationist paper and pick it to pieces. In 1984 he chose the first adaptationist take on sexual cannibalism. In American Naturalist, scientists looked at how a male might benefit by being eaten. They considered the possibility that he could give extra resources to a female, ensuring that his offspring would survive to hatching. Gould hammered on the paper, in an essay called "Only His Wings Remained.". He argued that adaptationists were seeing adaptations everywhere, like shapes in clouds. Gould reviewed the evidence for sexual cannibalism and concluded it was just the rare byproduct of reflexive attacks from hungry females. Most of the papers on sexual cannibalism since then cite Gould's essay, but their conclusions often go directly against him. They develop an adaptationist hypothesis, test it, and in some cases find support for it. One of the first examples of this work was that of Maydianne Andrade of the University of Toronto, who showed that male Australian redback spiders somersault into the fangs of their mates--and father more baby spiders in the process. (I described some of her work in my book Evolution: The Triumph of An Idea.) For many adaptationists, these results were a vindication against Gould and his allies. In 2000, a leading adaptationist, John Alcock, published a withering attack on Gould. He gave special attention to Andrade's work. What Alcock found most objectionable in Gould's writing was not that Gould disagreed with some particular adaptationist hypothesis. It was the way Gould tried to dismiss any adaptationist hypothesis as unworthy of research. It is certainly true that the hypothesis that got people thinking about sexual cannibalism in 1984--male as meal--has not found support. But there are other ways in which natural selection may favor sexual cannibalism. In some cases, it may give males enough time to stick sperm plugs in females, preventing other males from fertilzing their eggs. In one species of spider, the male dies in coitus. So cannibalism per se is not an adaptation, but the male's death may well be. That's because when the male spider dies, his sexual organs inflate and get stuck in the female. The latest wrinkle in the sexual cannibalism debates appears once again in the American Naturalist. Scientists found that males adjust their behavior based on how hungry the females are. (You can read the whole paper for free here.) So in one sense, Gould was right: male mantises are not willing partners in their own death. But the paper is more Dawkins than Gould. The male mantises have some way of telling how hungry the females are, and take lots of precautions--jumping on from further away, taking longer to dismount, and so on. These sound like adaptations to me, not historical quirks. And considering how often females try to eat their mates, it's not surprising that male mantises would evolve this sort of self-preserving behavior. As I mention in the article, SUNY biologist William Brown, who carried out the research, is looking into the possibility that females lure males to their doom, not for sex but for lunch. Gould would not approve, I'd imagine, but that's not stopping Brown--or many other biologists. If all this does not quench your appetite for sexual cannibalism (ugh), check out the Times podcast, where I'm the first guest. And the story comes with some awesome pictures from Catherine Chalmers of the death of one male mantid.