Species from praying mantises to snakes have been observed engaging in sexual cannibalism. Like most things in nature, there’s a reason behind the behavior. 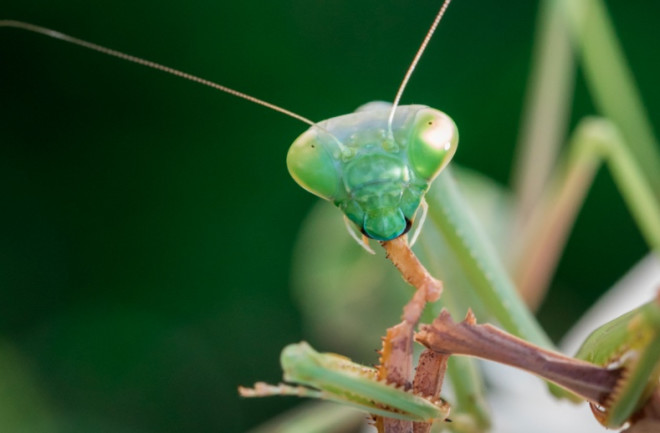 Spiders do it. Snakes do it. Humans, thankfully, do not do it. Yes, we’re talking about sexual cannibalism, the gruesome, surprisingly-common practice of eating your mate after procreation. The most commonly-known example might be praying mantises, where females often bite the heads of their paramours off after mating. The practice shows up in spiders, too, and it’s what gave black widow spiders their common name — though sexual cannibalism may occur in the species only rarely.

Scientists have come up with a number of hypotheses for why sexual cannibalism occurs, positing that males make good meals, or that aggressive females get confused about what is prey and what isn't. In many cases, there’s a chilling, calculated logic to the decision: Males are simply a good source of food for expectant mothers. Males of some species even go so far as to offer themselves as a meal to females after they’ve finished mating.

But other clever males have devised means of avoiding becoming a post-coital meal. Gifts of food suffice for some species, while some quick silk-lassoing is required in others. Either way, it’s true what they say: It’s a mate-eat-mate world out there.

From Father to Food

Richard Dawkins’ 1976 book, The Selfish Gene, popularized the idea that the sole purpose of biological life forms is to pass their DNA from one generation to the next. From this perspective, the bodies we inhabit might be no more than vessels for the genetic information they contain; once those genes have been promulgated to the next generation, the physical body has little use.

That’s certainly not true for every species (humans, for example) but it does bear out for what biologists call semelparous animals — those that die after mating. Many plant species die after reproducing, as well as animals like salmon and male antechinus. It’s also true for male brown widow spiders, who offer themselves as living sacrifices to females. During mating, a male will place its abdomen near the fangs of the soon-to-be mother of its children. The female will consume her mate, using his body as sustenance for her children.

Even more impressive, male redback spiders perform what scientists describe as a somersault directly into the mouths of females after mating. The gymnastic performance is deadly, but also effective: Males that sacrifice themselves have twice as many children.

Battle of the Sexes

In many cases, scientists believe sexual cannibalism arose from basic necessity. Expectant mothers need lots of food to sustain their children, and the males offered a nearby source of protein. For example, a study in spiders found females that ate males had larger brood sizes than those that didn’t. Over time, females that ate their mates had more children and the behavior spread through evolutionary selection.

Not every male is so selfless, though. In many species, the females behave in a manner that’s much more predatory. One theory posits that sexual cannibalism is what scientists call a “maladaptive side effect” of female aggression. It’s borne out by studies showing that aggressive females are more likely to eat males. Females that are more aggressive when hunting tend to get more food, and have better odds of surviving and having children. The unfortunate males in this case may simply be in the way.

A different theory for sexual cannibalism holds that it’s the result of females being choosy. Less impressive male wolf spiders, for example, were more likely to be eaten by the females, one study found.

Isopods, a kind of crustacean, also engage in sexual cannibalism, though in their case it appears to go both ways. Both males and females have been seen eating their mates after sex. Researchers aren’t quite sure why male isopod sometimes eat females — they did just go to the trouble of creating offspring with them, after all. It may only occur when females die shortly after mating, scientists say, or when males are dangerously short of food.

Sexual cannibalism has been seen, though rarely, in octopuses as well. In one instance, a female blue octopus killed a small male after he’d mated with her multiple times, before dragging his body to her den for dinner. The females often kill males by strangulation, wrapping a tentacle around the male’s mantle to cut off the flow of water to their gills, suffocating them.

Faced with potentially deadly sexual encounters, the males of many species where this occurs have devised sometimes ingenious methods to avoid death.

Some take the route of appeasing their potentially-ravenous partner. Male nursery web spiders often come bearing nuptial gifts — tasty insects — for their hungry mates. Those that do are cannibalized at far lower rates than males that show up empty-handed, researchers found.

Other males opt for the element of surprise. In a number of species of spider, males have been observed waiting until a female has begun eating an insect or molting to begin mating. Such opportunistic mating strategies ensure a female is sufficiently distracted, hopefully so much so that cannibalism is far from her mind. Similarly, one species of mantis will sometimes time their approaches to the female with sufficiently strong gusts of wind, likely to cover any sign of their advance.

Others take a more direct approach. Male nursery web spiders will tie the legs of their prospective mates with silk prior to mating, something researchers have termed a “bridal veil.” The strategy not only protects the males against predation, it also lets them mate for longer, increasing the chances of having offspring. A 2016 study confirmed that males who opted for bondage significantly decreased their chances of getting eaten by females. Tying the knot, indeed!