Sex and the City: Female Frogs Prefer the Mating Calls of Urban Males 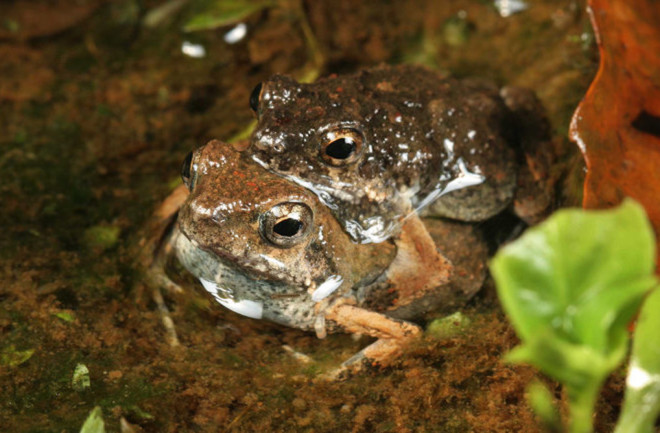 (Credit: Alexander T. Baugh/Encyclopedia of Life) If you find yourself swooning over urbanites more than country boys, you’re not alone. A new study found that female túngara frogs were more attracted to the mating calls of males living in cities than those residing in forests. Researchers found that male túngara frogs in urban areas have more prominent, complex calls than those in the wilderness — a possible adaptation to noisy city life that's enabled by a lack of predators. A study outlining this newfound evolutionary trait was published on December 10 in Nature Ecology and Evolution.

Humans have intruded into the lives of creatures all over the planet. Instead of heading for the hills, some of these native creatures stick around and learn to adapt to their new surroundings. But overcoming factors like added noise and light pollution can impact their ability to communicate with one another, which is especially important when it comes to finding a mate. To see how communication styles differ in populated and remote areas, a group of researchers homed in on túngara frogs — inch-long amphibians that reside in Central America. Led by Wouter Halfwek, an assistant professor at Vrije Universiteit Amsterdam’s Department of Animal Ecology, the team ventured to the Panama Canal to record the mating calls, characterized by their distinct “chuck” sound, of male frogs residing in both forested and urban regions. The recordings showed that frogs living in urban areas would call out more frequently, and that they bellowed more "chucks" than their forest-bound counterparts. The researchers think that males give off stronger, more complex calls to compensate for bustling city noise, and that a lack of predators allows them to get away with it. "In the forest, these more attractive calls have a higher cost," said researcher Mike Ryan, a professor of integrated biology at the University of Texas at Austin, in a press release. "The sound can attract frog-eating bats and bloodsucking midges." Mating calls from city-slickers may be more noticeable, but do females frogs really find them more attractive? To find out, the team played the recordings of urban and forest males back to females in a lab. And as it turns out, about 75 percent of females favored mating calls from cultured, urban frogs.

This distinct difference suggests that frogs adapted to city life over time and developed the ability to project stronger, more complex mating calls. To investigate this theory further, the researchers swapped the frogs’ living quarters — placing city frogs in the forest and forest frogs in the city. They found that urban frogs adjusted quite well to country life, toning down the loud mating calls needed to attract females in the city. Country frogs, on the other hand, underwent something like culture shock. They retained their soft-spoken demeanor and had trouble attracting urban females, suggesting that they might not have the ability to create strong, distinct mating calls. As humans continue to populate new regions, these types of evolutionary adaptions could prove crucial to critters who have been stripped of their natural habitats. But then again, there's a chance that females just prefer the sweet tunes of downtowners.