Service dogs don't understand that their owners are blind. 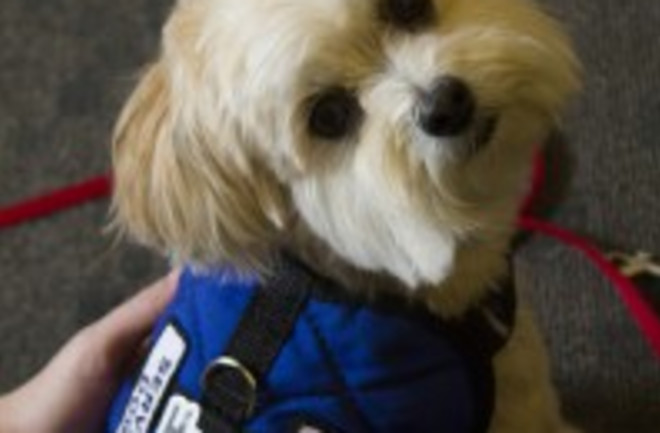 Guide dogs help their blind owners in amazing ways, from navigating public transportation to preventing them from crossing streets in traffic. It's clear that the dogs know what they need to do, but do they know why they are needed? To answer this question, a French anthropologist filmed guide dogs and pet dogs "asking" their owners for food. Both groups of dogs used visual cues to indicate their desire for food by looking back and forth between the food dish and the owner. Because the guide dogs continued to use sight-based communication, the author reasoned that they do not understand that their owners cannot see them. However, the guide dogs did learn that sounds can help them communicate with their owners, and they licked their chops more frequently than the dogs of sighted owners (an auditory cue). We wonder if they used their guilty look less often as well?

How do guide dogs of blind owners and pet dogs of sighted owners (Canis familiaris) ask their owners for food? "Although there are some indications that dogs (Canis familiaris) use the eyes of humans as a cue during human-dog interactions, the exact conditions under which this holds true are unclear. Analysing whether the interactive modalities of guide dogs and pet dogs differ when they interact with their blind, and sighted owners, respectively, is one way to tackle this problem; more specifically, it allows examining the effect of the visual status of the owner. The interactive behaviours of dogs were recorded when the dogs were prevented from accessing food that they had previously learned to access. A novel audible behaviour was observed: dogs licked their mouths sonorously. Data analyses showed that the guide dogs performed this behaviour longer and more frequently than the pet dogs; seven of the nine guide dogs and two of the nine pet dogs displayed this behaviour. However, gazing at the container where the food was and gazing at the owner (with or without sonorous mouth licking), gaze alternation between the container and the owner, vocalisation and contact with the owner did not differ between groups. Together, the results suggest that there is no overall distinction between guide and pet dogs in exploratory, learning and motivational behaviours and in their understanding of their owner's attentional state, i.e. guide dogs do not understand that their owner cannot see (them). However, results show that guide dogs are subject to incidental learning and suggest that they supplemented their way to trigger their owners' attention with a new distal cue." Related content: NCBI ROFL: Behavioural responses of dogs to asymmetrical tail wagging of a robotic dog replica. NCBI ROFL: Allergy to human seminal fluid: cross-reactivity with dog dander. NCBI ROFL: Probing pooch paw preferences.