There are some who say that helping others is its own reward, and many biologists would agree. The fact that selfless acts give us a warm glow is evident from personal experience and neurological studies, which find that good deeds trigger activity in parts of the brain involved in feelings of reward. But feeling food by being good isn't just the province of humans - monkeys too get a kick out of the simple act of giving to their fellow simians. 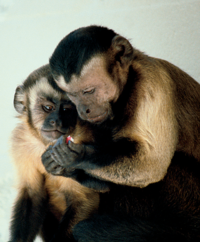 At the Yerkes National Primate Research Center, Frans de Waal's team of scientists have been investigating the selfless side of eight brown capuchin monkeys. Each monkey was given a choice between two differently coloured tokens. Both would earn it a rewarding piece of apple but only one token would net a slice for a second monkey sitting in an adjacent transparent compartment.

The chooser would benefit equally no matter what choice they made, so if they were completely cold to the needs of their peers, you would expect them to pick both tokens with equal frequency. Otherwise, the "prosocial" token which benefited a second monkey would be the favoured pick. Everything else begin equal, would the monkeys take the welfare of their fellows into account?

They did. De Waal put the capuchins through three blocks of ten trials and even during the first set, they were more likely than not to choose the token that benefited the other monkey. By the end of the experiment, they were selecting the prosocial token about two-thirds of the time.

The capuchins hailed from two different social groups and the team's close knowledge of these cliques allowed them to probe the boundaries of the animals' charitable side. Humans show the strongest degree of empathy towards those closest to them - friends and family - and you would expect the capuchins to behave similarly. Indeed they did, and were most likely to pick the prosocial tokens when the other monkey was a blood relative. They were also willing to help out unrelated members of the same group but the line stopped at unrelated strangers, who only received a tasty treat during half of the trials.

These sorts of experiments are quite difficult to do while ensuring that the monkeys' responses are truly genuine, so the team went out of their way to rule out other explanations. The team did a set of trials while wearing a tinted face-shield, to account for the possibility that the monkeys were biased towards one choice over another because of subtle movements of the experimenters' heads or eyes. And to control for favouritism for tokens in one position, they randomly swapped the position of the two tokens, or gave the monkeys a choice between six jumbled ones. Neither change had any effect on the frequency of the monkeys' giving behaviour.

Perhaps the animals were influencing each other? It's possible that monkeys were only helping out their peers because they feared retribution when they were returned to their enclosures. But on average, the dominant monkeys were actually slightly more likely to be selfless than subordinate ones, which is exactly the opposite pattern you would expect if their charity was really motivated by fear of punishment. The partner monkey hardly ever actively threatened or cajoled the chooser either.

Even so, it's clear that the partner's presence was important and that the chooser knew what it was doing when it picked the token that would benefit them both. During these choices, the chooser tended to sit close to their partner, face them and exchange social signals. And if the team slid an opaque screen in front of the second individual so the chooser couldn't see it, they mostly picked the selfish option. 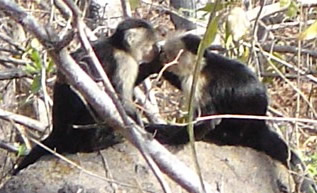 De Waal says that having ruled out fear of punishment, bias, persuasion and other alternatives, the best explanation for the capuchins' actions is that the act of giving is personally rewarding for them. No matter what decision the chooser makes, it walks away with a mouthful of apple so any benefits gained by picking the prosocial token must be intangible ones. To de Waal, these intangible perks probably resemble the warm glow that we humans get when we help each other out.

It all boils down to empathy, the ability to understand someone else's state of mind. This simple aptitude automatically gives an individual an automatic state in the wellbeing of its peers - watch someone else feel good and you will too. Humans are notable for our strong sense of empathy, but de Waal's capuchins have demonstrated a faculty for it too.

And there was another side to their altruism that we might recognise - a contingency on fairness. Capuchins prefer grapes to apples and if the prosocial token led to the partner getting a grape while the chooser just received an apple, they were less likely to be selfless. They were happy seeing their compatriots being rewarded, but not with a gift more extravagant than their own. It's not the first time that de Waal has found that capuchins react badly to raw deals.

Altruism - the selfless concern for others - is one of the hottest topics in evolutionary biology, but so much effort is spent on understanding its origins that very few scientists try to examine the causes of altruism in the here and now. This study is one of the few that have tried to look at the immediate motivations behind selfless acts, aside from their long-term evolutionary benefits.

We can draw an analogy to other behaviours. Sex, for example, allows an animal to pass on its genes to the next generation, and such evolutionary causes are known as "ultimate" ones. But individuals are hardly thinking about that when they're getting it on and most humans actively try to avoid thinking about it! Animals mate because combinations of hormones and nervous impulses drive them into an amorous state - they are the "proximate" causes of the behaviour.

In this case, the ultimate evolutionary reasons for cooperation include the benefits of helping out related individuals who share many of the same genes, and preserving your own life by helping those who are likely to reciprocate in the future. Neither is a good proximate reason - they can tell us how altruism emerged, but not about a capuchin's reasons for offering food to their peers in the present. If we believe that monkeys help each other in anticipation of a reciprocal hand, we also need to assume that they can predict the likelihood that other monkeys would return the favour. That's a complex mental ability and one we shouldn't just assume exists. To de Waal, the idea that monkeys can empathise with each other is more plausible.

What about other primates? Some scientists have reported that chimps are indifferent to each other's welfare but last year, Felix Warneken's group found compelling evidence that chimps clearly help each other out. In that study, the chimps assisted each other in targeted ways that required them to understand the goals their partner was trying to achieve. The capuchins in the current study didn't have to do anything so complex; they just needed to be aware that their partner was either getting or not getting a reward.

Regardless of complexity, both apes and monkeys were probably driven by the same motivation - empathy and sensitivity towards the welfare of another individual. It's a trait that they share with us. But not all of us. Tomorrow, I'll discuss another paper that comes out within days of this one, which looks at how young human children behave in very similar psychological games. We'll also take a closer look at those chimpanzee studies...