See It to Believe It: Animals Vomit, Spurt Blood to Thwart Predators 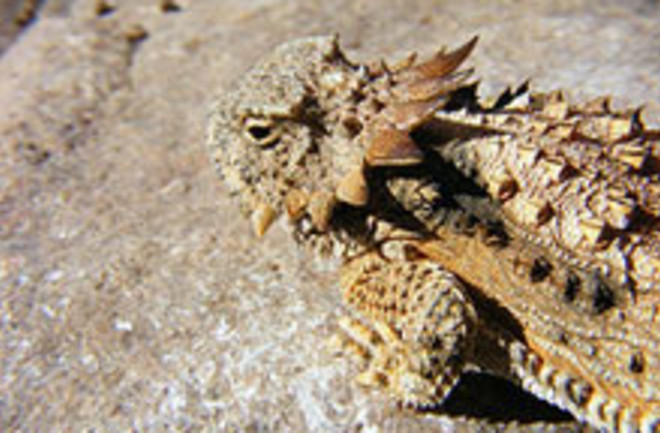 The animal kingdom is full of weird stuff, like animals that turn into zombies—and one thing many of them will do is go to great (and gross) lengths to avoid predators. Armored crickets, which are native to Namibia, South Africa, and Botswana, have a particularly disgusting means of driving away predators: They spew vomit and spurt hemolymph (the mollusk and arthropod version of blood) from under their legs and through slits in their exoskeleton. Katydids do it too; in fact, in Germany the species has acquired the nickname "blutspritzer," or "blood squirter." But that's not all. Wounded crickets can attract other crickets foraging for protein and salt—and the healthy crickets are happy to become cannibals. According to BBC:

"When swarms [of crickets] in the African bush meet a road, lots get squashed and the others gather for a feast, so more get squashed until there can be a thick, acrid pancake of dead and moribund crickets on the roadside, bleeding and attracting more cannibals," says [entomologist Bill] Bateman.

The Regal Horned Lizard, too, uses the blood-spewing tactic, shooting the substance from a pocket near its eyes...straight at its attacker's eyes and mouth. Check out this video of the lizard shooting blood. (Caution: It's graphic, as videos of animals spurting blood are wont to be).

Gallery: Zombie Animals and the Parasite That Control Them

Discoblog: Disgusting Things Are Just as Gross Whether They’re Real or Imagined

More From Discover
Health
Walking vs. Running Benefits: Should You Walk or Run for Exercise?
Mind
Gut Bacteria's Role in Anxiety and Depression: It’s Not Just In Your Head
The Sciences
This 2,300-Year-Old Mummy Has a Heart (and Tongue) of Gold
Mind
Can Playing Video Games Make You Smarter?
Health
Is Vitamin C Actually an Effective Cold Remedy?
Health
Why Walking Might Be One of the Best Exercises For Health
Recommendations From Our Store
My Science ShopDiscover STEM Kits
My Science ShopDiscover 2022 Calendar
My Science ShopStrange Science
My Science ShopElements Flashcards
Shop Now
Stay Curious
Join
Our List