Searching for the Human Age

Geologists mine for rock-solid evidence of the Anthropocene. 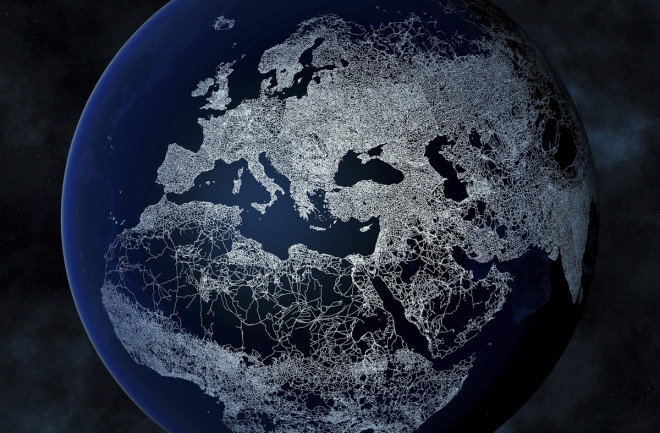 Road networks superimposed onto an image of Earth show the extent of humanity's reach across the globe. (Credit: Félix Pharand-Deschênes, Globaïa/Science Source)

At a tarp sheltering a 6-foot-deep pit, he stops and climbs into the hole. On the bottom are large boulders left behind by glaciers some 12,000 years ago. It was around that time that Paleo-Indians arrived in this part of the Lehigh Valley.

Stinchcomb, a geologist at Murray State University in Kentucky, is there looking for traces of a more recent past. He is searching for evidence that Earth has entered the Anthropocene, a new epoch defined by the idea that humans have surpassed nature as the primary shapers of the planet.

Scientists are divided over whether to formally recognize the Anthropocene, or the Human Age, as a bona fide geologic time period. To establish a new epoch, geologists usually have to find clear evidence in the rock record of a massive, planet-altering shift. Human-caused change is undeniable, but have we truly become master engineers of the planet?

Stinchcomb believes he’s found a way to resolve some of the debate. The clues for humanity’s entrance into the Anthropocene, he says, lie in the traces we’ve left behind in layers of sediment and soil. What’s needed is a concerted effort to plot these imprints and use them to show when the epoch of the past 11,500 years, the Holocene, could have yielded to the Anthropocene.

“I think there is a way we can go out and systematically map this stuff,” he says. “You need to start building the evidence so everyone can go out and say, ‘There it is; that is the Anthropocene boundary.’ ”

Digging Through the Past

Rock and sedimentary layers hold the clues to understanding the major episodes in our planet’s 4.6 billion-year history. Take the Mesozoic period, which ended with the massive crash of an asteroid or comet into the Yucatan Peninsula 66 million years ago that is thought to have killed off most dinosaurs. Geologists found the evidence for the Mesozoic’s demise in a thin layer of iridium, a rare metal found on asteroids, isolated in the rock record at El Kef, Tunisia. The scientists who found it hammered a golden spike into a hillside to mark the boundary.

Archaeologist Del Beck digs through the past of Pennsylvania’s Lehigh Valley in a pit at the Nesquehoning Creek research site. (Credit: Michael Stewart/Temple University)

Proponents of the Anthropocene theory point out that few corners of the planet have escaped the mark of humanity. Factories, power plants and cars have spewed enough greenhouse gases to change the fundamental chemistry of the atmosphere. The gases trap heat, raising global temperatures. Bulldozers and excavators are now the globe’s prime earth movers — more so than rivers, glaciers, wind and volcanoes combined. About one-third of the world’s animals are threatened or endangered. It may be enough to sift through human history, rather than dirt, to find “Year Zero” — the point when the world entered the Human Age. But Stinchcomb thinks that to really lock in the Anthropocene, old-fashioned geology, combined with a bit of archaeology, offers the best hope.

Inside the excavated pit in the Lehigh Valley, he studies the walls. They resemble a layered cake. Each time the river flooded, it threw up a fresh layer of sediment onto the banks. He points to the river’s floods, captured in the strata. “The whole sequence is a series of ancient floods, some more extreme than others,” Stinchcomb says. “They indirectly reflect what you have around you [at the time of the flood] — whether you’ve got vegetation cover and what type it is, for instance.”

He picks up a trowel and scrapes sediment from a prominent layer near the top. The black contrasts sharply with the dull brown sediments of other floods. Stinchcomb and his colleagues have dated the carbon in the layer to the beginning of the Industrial Revolution in the 1820s. The source? Coal silt.

“It is one of the earliest spots in Pennsylvania where coal mining really took off,” Stinchcomb says, pointing at a nearby mountain called Summit Hill. Miners there discovered the Mammoth coal bed in the 1700s and extracted it rapidly, floating the coal down the Lehigh River on flatboats. Some of the material spilled and settled on the riverbed. When the river flooded, it threw coal silt onto the banks.

The resulting coal layer is as clear a geologic mark as a volcanic eruption. Stinchcomb calls it an “anthropogenic event” — a geologic layer caused solely by humans.

If scientists can identify enough of these human-derived layers within the last 10,000 to 12,000 years and zero in on when the most significant ones occurred, that point in time would be a good candidate for the Anthropocene boundary, Stinchcomb says.

Evolution of a New Age

Nobel laureate Paul Crutzen first posed the idea of the Human Age at a geology conference in 2000. He put the birth date of the new epoch at the period after the Industrial Revolution, when humans were causing massive shifts in the biosphere, triggered by coal production. Scientists drilling ice cores out of Greenland have found lead from fly ash, a byproduct of coal combustion, dating back to the era.

Later, William Ruddiman, an emeritus paleo-climatologist at the University of Virginia, placed the origins of the Anthropocene at about 5,000 years ago, when farmers in Southeast Asia were learning to irrigate fields to grow rice. When plants died and decomposed, they released methane, a potent greenhouse gas. Ruddiman theorized that early farmers had released enough methane to warm temperatures globally.

The idea gripped Stinchcomb, who has a background in both archaeology and geology. After seeing Ruddiman lecture on his theory, “I kept asking myself, if people could have altered the climate that early, what else have they done?” he recalls.

Yet another proposal for Year Zero came from a London-based group of scientists and geologists called the Anthropocene Working Group. They suggested the epoch began in the 1950s, when pollutants, plastic and — most notably — radioactive compounds from atomic explosions began accumulating in remote corners of the planet.

The debate over Year Zero intensified. In 2009, Stinchcomb decided to settle the debate the old-fashioned way — with a shovel and a trowel — and began exploring the pits in Lehigh Valley.

Three years later, at the annual meeting of the Geological Society of America, Stinchcomb presented his theory to a standing-room-only crowd: Scientists can map out anthropogenic events captured in sediments in the earth, he said. The events would need to have a clear anthropogenic origin, like the layer of coal in the Lehigh River Valley.

'Ask Me in a Million Years'

Some geologists, however, think it is too early in our species’s history to declare human dominance over the Earth. University of Cambridge stratigrapher Philip Gibbard, an expert on the Quaternary period encompassing the past 2.6 million years, points out that a pandemic could decimate the population.

With enough evidence from around the world, the debate over the human age could be settled once and for all.

Cities would fall and buildings would crumble back into sediment, he says. The climate would reset after a few millennia. The rock record would contain evidence of civilization, but it would only be a brief spike, contained wholly within the Holocene.

To Gibbard, talk of a new Human Age is a bit premature. “Ask me in a million years,” he says.

Stinchcomb gets Gibbard’s point of view. After all, the layer of coal that Stinchcomb and his colleagues have excavated is very recent compared with the 4.6 billion-year history of the planet.

“I think we have impacted the planet to a degree that is widespread and measurable,” he says. “[But] we are definitely not masters of this planet. We are still very much a species vulnerable to natural changes.”

Stinchcomb wants to see more scientists map localized anthropogenic events to create a “basket” of markers. With enough evidence from around the world, the debate over the Human Age could finally be settled.

Back in the Lehigh Valley, Stinchcomb follows the river upstream. He comes across a pile of clamshells and broken wine bottles. He plunges a long rod with a scoop at the end, called a split-spoon, into the ground, and brings up red brick. There had been a home here, probably when a coal town thrived nearby. Today, some red dust and debris are all that’s left. It was a minuscule moment in time, already taken over by the forest.

This story originally appeared in print as "Searching for the Human Age."