Population in Seychelles atoll has increased by roughly 500 percent since the 1960s. 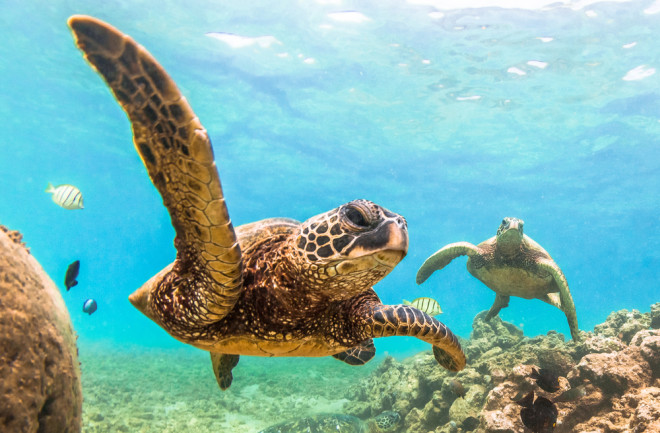 Sea turtles and their eggs were considered such a delicacy in the 1700s that traders would travel to a remote atoll in the middle of the Indian Ocean to gather great numbers of the reptiles and ship them to far-flung soup bowls in Paris and England. The culinary trend was so popular that the Seychelles government was purportedly giving out licenses in the early 1900s for the take of 12,000 green sea turtles on Aldabra Atoll, a large atoll roughly 1,120 kilometers from the nation’s capital, Victoria.

“Turtles and in particular turtle soup was a delicacy for the higher echelons of the British Empire in particular,” says Adam Pritchard, a conservation biologist with the University of Exeter in the United Kingdom.

More than a century of harvest had an extreme impact on the population, so much so that by the 1960s the beaches of Aldabra were only seeing roughly 2,000 egg clutches per year. Since green sea turtle females typically lay between three to five clutches of eggs in a given mating season, researchers estimated only about 500 green sea turtles were nesting on Aldabra’s beaches at that time.

Green sea turtles on the atoll were eventually protected in 1968, and now new research by Pritchard and others shows that decades of conservation in the half-century since has resulted in a boom in sea turtle numbers — especially in the past decade.

“These animals are resilient — even if they go down to near extinction levels,” says Pritchard. “If you allow them the time and space to recover, then they can really bounce back.”

The Seychelles Islands Foundation began counting turtle tracks on the beaches and nests after Aldabra Atoll was protected in the late 1960s. But the data had been entered in different ways by more than 100 people and often included counts from different beaches at different times. For a study published recently in Endangered Species Research, Pritchard began to work with the data while conducting his master’s research at the University of Exeter — it took him and the research team on the atoll six months to compile all the data into a uniform database.

In earlier research, Jeanne Mortimer — a co-author from Seychelles Islands Foundation also involved in Pritchard’s recent study — led an analysis that found green sea turtles were recovering on the atoll. But that 2011 study’s data cut off in 2008, and Pritchard wanted to see if this trend was continuing in the face of factors like climate change and ocean pollution.

The numbers revealed a massive increase in green sea turtle clutches since the low numbers of the 1960s. The latest estimates showed more than 15,000 egg clutches on the beaches of Aldabra Atoll per year from 2014 to 2019.

Based on the average of three to five clutches per female, Pritchard says that between 3,000 and 5,000 green sea turtles are visiting the beaches of the atoll every year to lay eggs. That represents a roughly 500 percent increase since the 1960s.

The researchers found some differences between beaches on the atoll. The longest beach on Aldabra, which was the most heavily exploited, took a while longer to see a recovery in sea turtle numbers. They began to turn around in the 1990s, and the 2011 study predicted a surge in numbers there.

Pritchard’s new analysis confirms this as turtles have returned to this long beach in force in the years since. He says turtles were virtually wiped out on that beach as it was the main base for harvesters in past centuries. The lag time in their recovery here likely has to do with the innate tendency of sea turtle females to return to the beach where they hatched when they nest themselves. But turtles will occasionally visit other beaches — and after a time females made it to this beach to nest. The long time it takes for sea turtles to mature (20 to 50 years) also plays a role in the overall recovery time.

Trouble on the Horizon

Even as sea turtle numbers are recovering in this part of Seychelles, researchers have come across some potential obstacles to their continued recovery. One issue is the pollution that washes up on the beaches. Some trash is large enough that it can block the females from reaching the prime sands up the beach for nesting. According to records kept by the Seychelles Islands Foundation, tracks indicating the turtles turned back to the water after encountering garbage doubled after 2000, compared to numbers in the previous century. Pritchard adds that these numbers likely miss many thwarted nesting attempts that went undetected.

It’s difficult to say whether this is causing population-level problems for turtles. But Pritchard worries that if turtles are turned back, they may nest in suboptimal places. For example, turtles that get turned back may nest in sand closer to the water where the eggs could get flooded and killed.

“Unfortunately, every trend suggests that more and more [pieces of garbage] are going to wash up,” Pritchard says.

Climate change could also cause an issue in the future. “With green sea turtle eggs, as is common among reptiles, the sex of the hatchlings depends on the temperature of their surroundings,” Pritchard says. This means if the sand is too hot around eggs, the entire clutch may turn out female. If this started to happen more often, there could be serious implications for the population of sea turtles. So far, the data hints that turtles may be shifting their nesting season to cooler months to compensate, Pritchard says, but the numbers are not yet statistically significant.

Potential issues aside, Pritchard says that if the 12,000 harvesting licenses issued in the early 1900s represent an accurate number, the population of green sea turtles nesting on Aldabra Atoll hasn’t yet come anywhere near the numbers they were at historically, and there are no signs yet that the population is peaking. If those numbers are true, it’s possible current numbers could double or even triple in coming years.

“All this hard work is paying off — the numbers are extraordinary,” he says, adding that long-term conservation programs and population tracking efforts are key to this success. “It requires a great deal of patience and it requires a lot of effort.”