All men by nature desire to know. An indication of this is the delight we take in our senses; for even apart from their usefulness they are loved for themselves; and above all others the sense of sight" - Aristotle 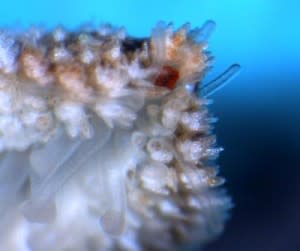 I see you! A sea star's compound eye (red spot). Image credit Dan-Eric Nilsson, Lund University Human beings are very visual animals. We rely on our sight more than any of our other senses to interpret the world around us, which is why over the centuries many have argued (and many still do) that sight is our most important sense. But, of course, we aren't the only species that can see. Arthropods are particularly known for their acute vision, as are squid, octopus and other cephalopods. Yet although we've known about sea star eye spots for hundreds of years, no one knew whether they, too, are able to see images. That is, no one knew until Drs. Anders Garm and Dan-Eric Nilsson decided to investigate. Visual pigments are found in all animal lineages, first harnessed by prokaryotes to respond to changes in light more than 2.5 billion years ago. But the first complex eyes didn't come on the scene until some 540 million years ago, when comb jellies, sponges and jellyfish were among the first to group photoreceptive cells and create light-sensitive ‘eyespots’. Many animals have eyespots—single cells or bundles of them packed with these light-sensing compounds that can measure light intensity. These primitive sensors allow them to distinguish light from dark, but don't form images like our eyes do to visualize objects. It was clear early on that sea stars had this level of vision at least, and could respond to changes in light intensity. Almost all species of sea stars possess compound eyes at the end of each of their arms, much like the eyes of insects except that they lack lenses. Without such optical components, it was unclear whether sea star eyes merely act as eyespots or whether they are truly "eyes" that allow the animals to see. The first step for Garm and Nilsson was to really, really look at sea star eyes—to investigate from the macro to micro level exactly what the compound eyes of these sea stars actually look like. They put Linckia laevigata sea stars under the microscope to describe their eye morphology in eexcruciating detail. 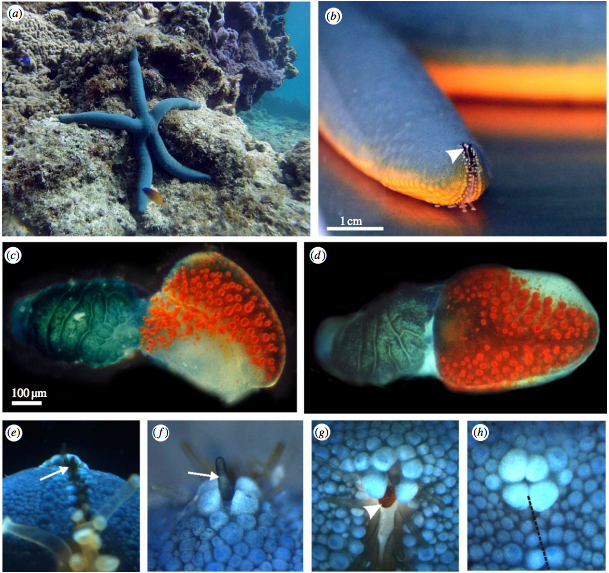 Figure 1 from Garm & Nilsson, 2014: (a) the sea star Linckia laevigata in its natural coral reef habitat at Akajima, Japan. (b) the compound eye of L. laevigatais situated on the tip of each arm (arrowhead). (c) Lateral view of the compound eye, sitting on the base of a modified tube foot. (d) Frontal view of the compound eye showing its bilateral symmetry. (e) The tip of the arm seen from below, the compound eye obscured by a double row of modified black tube feet (arrow). (f) The arm tip from above, the eye again obscured from view by a modified black tube foot (arrow). (g) The compound eye (arrowhead) seen from 45 degrees above. (h) The same view when the animal is disturbed, showing how it "closes" its eye. The sea stars eyes consist of pockets of photo-receptive cells with a single opening, allowing each eye to only detect about 210 degrees horizontally and 170 degrees vertically. But, given the position of the eye on each arm, this gives them a full view of their surroundings from the water's surface to directly in front of them, with lots of overlap between the eyes on each arm. Because they only have one opsin (light-sensing protein), sea stars are color blind. And, based on morphology alone, the researchers determined that sea stars could only detect large objects. Because they lack lenses, the image seen by a sea star would be crude at best, like a picture with only 200 pixels. Further tests on the speed sensitivity of the eyes showed that responses to light are very slow, so any quick movements would go unnoticed, thus eliminating the possibility that they use eyes to find food, detect potential predators, or even find mates. Instead, these simple eyes would only be useful for identifying major, slow or non-moving structures, like coral heads. Recognizing objects is much more than simply detecting the intensity of light, explain Garm and Nilsson—it requires the ability to form an image. Thus if sea stars use their eyes to navigate, it's strong evidence that they possess true vision. But do sea stars use their eyes to see where they are? Garm and Nilsson designed an experiment to find out. They took sea stars and set them 1, 2 and 4 meters away from reef patches where the stars would much rather be. They then tracked each of the sea stars, determining whether they moved towards the reef or the open ocean. Then, to really see if the eyes were involved, they also performed the experiment with sea stars that had their eyes essentially poked out (surgically blinded). When placed close to the reef, the stars moved quickly to get back. But from 4 meters away, the animals seemed to have trouble finding their reef home, moving at random, suggesting that this distance was too far for them to see across. This was further supported in the blinded stars—with their eyes surgically removed, even when they were placed a short meter from home, the sea stars wandered aimlessly. Because the sea stars are only able to navigate visually from short distances away, sea star vision is likely used in a very limited capacity. It's unlikely they use sight to look for new patches of reef, or to judge the relative quality of different reefs. Garm and Nilsson suggest that they probably only use their eyes to stay on the reef they're on, making sure they don't end up in a desolate sand patch where they would lack food and shelter. Of course, other sea star eyes may be better than those of Linckia laevigata—some species, like the crown-of-thorns sea star (Acanthaster planci), move quickly to chase down prey. It's possible that their eyes have evolved to see better than other sea stars, taking advantage of vision to track food. Further study of other species is needed to see find out. http://www.youtube.com/watch?v=HbFF5EeVG3U Garm and Nilsson's study is the first to demonstrate that sea stars not only are able to see objects, they use these eyes to locate and move towards habitat. While this is cool in its own right, the study also helps shed light on eye evolution and may lead to a better understanding of how visual senses arise. Prevailing hypotheses on the evolution of eyes suggests that the first eyes would have been simple structures attached to simple nervous systems, allowing only for basic visual processing. One of the first visually guided behaviors may have been sensing habitat—which is exactly what Garm and Nilsson have found in these primitive animals. "Our results here offer an example of a visual system at this early stage of evolution of true vision used for habitat recognition," write the authors. "From an evolutionary point of view it is interesting because the morphology of the starfish eyes along with their optical quality (quality of the image) is close to the theoretical eye early in eye evolution when image formation first appeared," said Garm in a press release. "In this way it can help clarify what the first visual tasks were that drove this important step in eye evolution, namely navigation towards the preferred habitat using large stationary objects (here the reef)." Sea stars eyes allow scientists to peer back in time and understand how animals first saw the world around them. The more we learn about primitive vision systems like the eyes of sea stars, the better we understand how our own complex visual system evolved. Citation: Garm A, Nilsson D-E. 2014 Visual navigation in starfish: first evidence for the use of vision and eyes in starfish. Proc. R. Soc. B 281: 20133011.