Scientists Still Stumped By The Evolution of Human Breasts

What are the benefits of breasts? 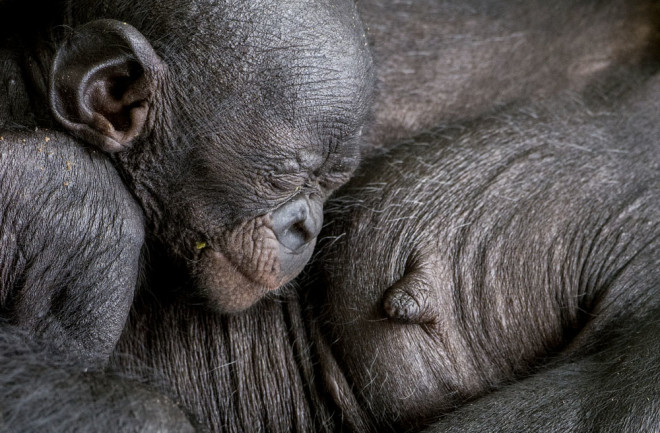 Primate mothers only develop enlarged breasts during ovulation, whereas human females have them from puberty on. (Credit: Sergey Uryadnikov)

“How about breasts?” The question came from a jock-y guy in one of my graduate school classes on human evolution.

Far from offensive, the query was appropriate and astute. My classmates and I nodded approval, and the professor added it to a growing list on the board.

We were brainstorming features that distinguish our species, Homo sapiens, from other primates. That list includes human peculiarities like big brains, upright walking, language, furless bodies … and permanently enlarged breasts after puberty.

In other primate species, only pregnant or lactating females have bosoms. The animals stay flat-chested for the rest of their lives. In humans, pubescent girls accumulate fat around their milk glands, which stays for life and seems to hold sex appeal in every culture. Those permanent, alluring mounds of fat on women’s chests are indeed an evolutionary anomaly, begging for an explanation.

The Benefits of Permanent Breasts

Over the years, researchers have proposed a number of explanations for human breasts. Some claimed evolution favored “pendulous” breasts — as scientists dryly describe them — because they gave babies something to cling to like handle bars.

Others suggested permanent breasts evolved as an energy reserve, lumps of fat to be tapped when food is scarce. From this perspective, women’s breasts may have originally functioned liked camel’s humps. Whereas in cold climates, animals maintain fat throughout their bodies for energy storage and insulation, desert-dwelling camels sequester fat in their humps to avoid overheating. Since our ancestors evolved in equatorial Africa, perhaps females stored fat similarly, in their breasts, butts and hips. Males wouldn’t have the same pressure to do so, since they don’t nurse or carry children in the womb.

Whether or not breasts first served as energy banks or handle bars for mothers and infants, they eventually caught the attention of males. This is why most researchers assume sexual selection has been at work: They argue that over the course of human evolution, permanent breasts helped females attract mates. Like the ostentatious feathers of male peacocks, breasts served as a message to the opposite sex, “Hey, look at these! Reproduce with me!”

And in the case of peacock feathers, and potentially breasts, there’s truth in advertising. The more spectacular the feathers, the healthier the bird, and therefore this trait is what evolutionary biologists call an honest signal: a reliable indicator of an animal’s quality as a mate or parent. It’s a feature potential suitors can assess before deciding, “Oh yeah, I want to make babies with this individual.” As for breasts, some hypotheses in the sexual selection camp contend the fat mounds are an honest signal of a woman’s mate-worthiness.

If the honest signal hypothesis is true, then some breast qualities, like size or shape, should correspond to a woman’s motherly potential. Furthermore, heterosexual men should be more attracted to breasts with those qualities. So is there a clear link between desirable female mate qualities, breast characteristics, and men’s tastes?

The results so far are inconclusive.

In Western populations, some studies have shown that most men prefer women with narrow waists and large breasts (here, here). To test if this Barbie-like inclination has any biological basis, one frequently cited 2004 paper investigated the relationship between breast size (as breast-to-underbreast ratio), waist-to-hip ratio and hormone levels, which indicate a woman’s likelihood to conceive.

The researchers measured two female sex hormones — progesterone and a form of estrogen (E2) — from spit samples, collected from 119 healthy Polish women every morning for the duration of one menstrual cycle, or roughly one month. Not considering waists, breast size alone related only to E2 levels. Because estrogen plays a crucial role in girls developing their womanly figures, this may suggest that breasts are just a side effect of gaining healthy voluptuous fat overall.

But the study also found that women with large breasts and narrow waists had higher values for both hormones — and the combo of these hormones predicts pregnancy success. This led the researchers to conclude that at least among these Polish women, “the cultural icon of Barbie as a symbol of female beauty seems to have some biological grounding.” Keep in mind though, successful pregnancy is not the same thing as raising a healthy child to adulthood. The hormone measures do not indicate a participant’s overall quality as a mother, just her chances of getting knocked up and giving birth.

And the picture gets complicated when additional populations are considered. A more recent study did not find any relationship between breasts, hips and hormones. However, this experiment only measured 33 California women.

In a 2017 study, scientists asked study participants to choose their breast preference, looking for universal choices that may be biologically programmed. (Credit: Kellie Jaeger/Discover; from Havlicek et al 2017, Rawson & Brooks 1984)

As for men’s taste in breasts, numerous studies have tried to uncover universal preferences, which may be biologically programmed. Usually, participants are asked to rate, in order of attractiveness, a few images of the same woman, digitally modified to have different-looking breasts. The ladies may be bikini clad, topless or just represented by a cartoon silhouette. Depending on the study group, researchers have found men more attracted to large, medium, or small breasts.

Men’s preferences seem influenced by number of factors, including: culture (says one study, “Brazilians preferred larger breasts and buttocks than Czechs”), socio-economic status (larger breasts for lower status men), sexual habits, (larger for men in short-term, non-committal relationships), body image, (larger for men who rated themselves more attractive), sexist attitudes (larger for men hostile toward women) and even hunger (hungry British men liked bigger breasts than fed participants). And some experiments focused on other qualities than size, such as how perky or symmetrical breasts are.

Suffice to say, if there are underlying, biologically evolved preferences for certain breast qualities, cultural and individual factors can override them. More research is certainly needed. One paper suggested, “Future studies should focus on a potential interaction between the two parameters, breast size and firmness.” It probably won’t be hard to find some college undergraduates willing to volunteer for that experiment.