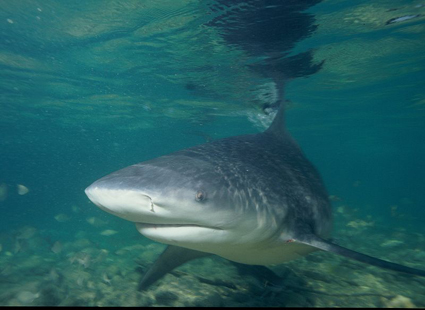 When you're nature's ideal killing machine, perhaps color vision is merely an unnecessary affection. New research argues that sharks could be completely colorblind. An Australian team led by Nathan Scott Hart investigated 17 shark species, peeking at the structure of their rod and cone photoreceptor cells in the retina. Human eyes come with red, green, and blue cone variations, allowing us to see in color. But not shark eyes. They appear to have just one kind of cone.

"Our study shows that contrast against the background, rather than color per se, may be more important for object detection by sharks," Hart said. [CNN]

That, Hart says, may explain the common wisdom that sharks love yellow

(and therefore you ought to avoid sunny swimsuits). It may be the reflective quality of yellow that catches a shark's eye, not the hue itself.

"Bright yellow is supposed to be attractive to some sharks, presumably because it appears to the sharks as a very bright target against the water," said Dr Hart. "So perhaps it is best to avoid those fluoro-yellow shorts next time you are in the surf." [BBC News]

, appearing in the journal Naturwissenschaften, is part of a larger effort to reduce shark attacks against swimmers and fishing lines. Says Hart:

"Now we know a bit more about how such sharks see the world, it may be possible to design swimming attire and surf craft that have a lower visual contrast to sharks and, therefore, are less 'attractive' to them. After all, most shark attacks are thought to be the result of curiosity on the part of a shark that has been attracted to an unusual stimulus, rather than some premeditated ambush." [Los Angeles Times]

The findings also bring up some interesting questions about how a shark sees. Shark species that swam during the day or cruised closer to the surface had more cones and fewer rod cells in their eyes than sharks that swam deeper or after dusk; that's no surprise, as rods are typically used to see at night. But why wouldn't the sharks with the larger number of cones also evolve the different kinds of cones needed for color vision? Hart doesn't know. The question is even murkier when you look at related species:

Sharks are elasmobranchs -- the oldest living relatives of the first jawed vertebrates -- so you might expect them to have relatively primitive vision. But some species of closely related rays are thought to possess the multiple cone cell types characteristic of colour vision. However, evolutionarily more recent marine mammals including whales, dolphins and seals appear to be as colour-blind as sharks: they also possess a single, green-sensitive cone type. [New Scientist]

80beats: The Secret Lives and Loves of Great White Sharks