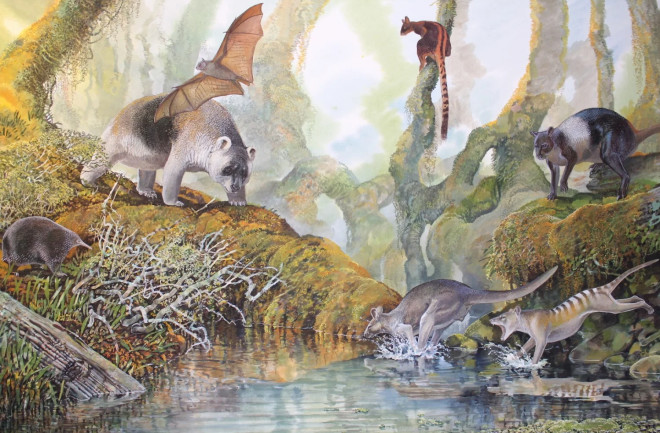 Almost 40 years ago, Australian palaeontologists found the fossils of an ancient species of kangaroo, approximately 20,000 to 50,000 years old. Strong, stout and substantial in size, the fossil species featured the same powerful legs, long feet and lengthy tail quintessential of kangaroos today. What was truly surprising about the fossils, some would say, was that they were found outside of Australia, on the nearby island of New Guinea.

Though kangaroos sometimes seem an almost strictly Australian species, that’s not entirely true. Kangaroos have had a long history of roaming through the nearby islands, and these fossil findings only emphasized that fact. Now, recent reanalysis of those same fossils in Transactions of the Royal Society of South Australia elaborate this history, suggesting that these ancient kangaroos are actually the first species of new genus found only in Papua New Guinea.

A team from Flinders University initially found the fossils at an archaeological and palaeontological site in Papua New Guinea known as the Nombe Rockshelter. The site is famous for delivering discoveries of several species of ancient marsupial over the years, all of which would’ve enjoyed the lush vegetation and leafy abundance of New Guinean rainforest environments.

“We think of these animals as being uniquely Australian, but they have this intriguing other life within New Guinea,” says study author and palaeontology researcher Isaac Kerr, in a press release. “The New Guinean fauna is fascinating, but very few Australians have much of an idea of what’s actually there.”

Years after the initial finding, Flinders University researchers have now returned to these remains, implementing new imaging techniques to investigate the fossils’ New Guinean form. Their studies revealed that the fossils, are actually a part of their own genus, rather than a close cousin or relative of the kangaroos in Australia today. As such, the researchers renamed and reclassified the species, which was once Protemnodon nombe, as Nombe nombe.

A key question about N. nombe still stands. Why were these kangaroos in Papua New Guinea in the first place? Well, the team theorizes that N. nombe evolved out of even earlier kangaroo species that originated in Australia and spread to New Guinea approximately five to eight million years ago. At that time, the lower sea levels built ‘bridges’ between the two territories, allowing animals to travel freely from one place to the other.

According to the researchers, the return of regular sea levels then separated the two populations, causing them to develop differently in their unique settings. N. nombe, they say, arose a product of that process.

Ultimately, the reinterpretation and reclassification of N. nombe fossils could inspire new investigations into New Guinean flora and fauna. In fact, researchers from Flinders University already plan to return to New Guinea sometime in the next year.