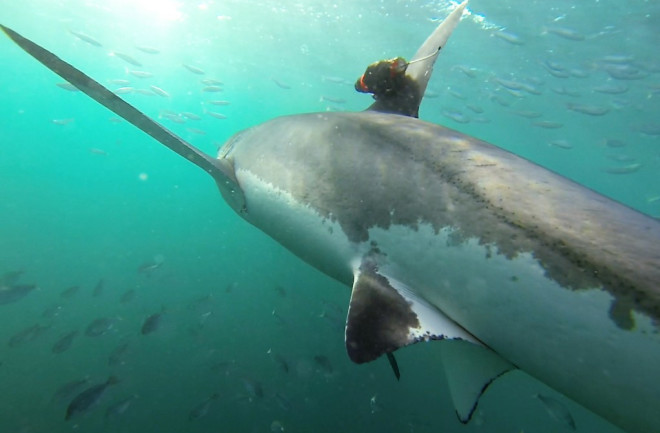 Tall undulating seaweed known as kelp grows in thick underwater forests off the southern coasts of Africa. The kelp forests were once thought to provide a safe haven to Cape fur seals from great white sharks. Then researchers put GoPro-like high-resolution cameras on the predators.

Instead of being deterred by the underwater flora, the sharks dive right into thick kelp forests in pursuit of prey, the researchers find. It’s a new discovery for shark researchers, who had previously thought the forests were off-limits for hungry sharks.

“It’s a completely new perspective of what they do,” said Oliver Jewell, a marine biologist at Murdoch University in Australia, who led the new research.

A shark being tagged for the study. (Credit: Jewell et al. (2019) Biology Letters)

Great white sharks are ambush hunters. They typically take down seals around dawn or dusk as the pinnipeds swim to and from rocky outcrops. But in previous research, Jewell and colleagues had discovered that near Dyer Island, a reserve at the southern tip of Africa, the sharks hung out near seal colonies all day long.

“We wanted to know why but it was hard to be sure without seeing what the sharks were doing beneath the surface,” Jewell explained.

The researchers attached HD video cameras to eight sharks as the nine to 12 foot predators swam freely in the water, making sure to the get angle just right so they could see what the sharks might do beneath the surface. Each camera recorded eight hours of footage during daylight hours over the next one to three days before dropping off the animals.

The video footage and tracking data from the cameras revealed the forests did not deter the predators. Nearly all of the sharks repeatedly moved into the dense kelp jungle, the researchers report today in the journal Royal Society Biology Letters. One shark even spent a majority of its time within the thick canopy.

The findings challenge earlier work. “A previous study found Cape fur seals were taking refuge from the white sharks in kelp forest,” Jewell said. “What we found is that the white sharks go into the kelp forest after them and are more than capable of navigating through and foraging within and through dense kelp.”

But even entering the seals’ hiding place is no guarantee of a meal. The seals evaded the sharks with expert diversion tactics. They blew bubbles, swam deeper into the kelp or hunkered near the seafloor. The evasive strategies proved effective. None of the sharks managed to snag a seal during the study, though that may have just been due to the fact that successful captures are pretty rare in general.

Still, “to actually get it on camera, a camera attached to a shark too, that was a great find and amazing feeling,” Jewell said.