Turning food into energy is essential for life to thrive, so researchers zoomed in on the tiny fragments of proteins that might have done the job billions of years ago. 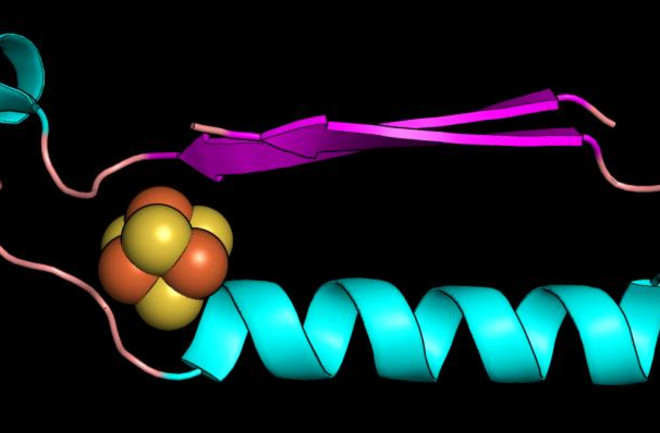 This illustration shows one of the earliest proteins that may have driven the evolution of metabolism. (Credit: Vikas Nanda/Rutgers University)

While the proteins that create life on Earth seem to vary indefinitely, there are a few parts they all have in common. Researchers say they have discovered which simple proteins were present when life on Earth first began to diversify, as described this week in a study published in PNAS.

The authors say these prehistoric proteins are smaller pieces of molecules that we know today as “enzymes” — materials that facilitate chemical reactions in living organisms. When isolated on their own, it appears the fragments act as enzymes, too. Two pieces in particular — one that binds iron to sulfur and one that helps nucleotides, the core pieces of DNA, connect — might be two of the oldest enzymes on Earth.

Still present in enzymes working today, these two fragments are the core pieces in the building blocks of life. They can function alone, but researchers say they allowed for the construction of the wide range of elaborate protein structures present on Earth today.

Proteins make up most of our bodies. Manufactured from DNA, they structure organs, fight off infections and, in many cases, run chemical reactions and regulate how other molecules interact.

But don’t expect archaeologists to soon dig up fossils of proteins that formed 3.5 billion years ago, when life first appeared on Earth. Ultimately, the conclusion to this study is a mathematical prediction, says study co-author Vikas Nanda, a biologist at Rutgers University.

“That’s the scientific challenge,” Nanda says. “How can we infer from what we have now what these looked like?” There’s a possibility these tools are the only ones that can facilitate some of the essential functions of life — no matter where it grows. If that proves true, this study could also hint at what researchers should look for when searching for life on other planets.

Mapping Out the Possibilities

Before early cellular life existed, there were enzymes — specifically ones that push electrons around and ultimately drive the transformation of food into energy. Because that process is essential to life, Nanda and his team looked at modern enzymes responsible for those tasks to see if they had more basic components.

The team examined proteins assembled in a global database and broke them down into their smallest functional pieces. Next, the team looked for the select few pieces that appeared across a range of larger structures, kind of like finding the nuts and bolts that are common to all car models. Each small, common piece is responsible for one task — such as binding iron or copper or another metal.

When Nanda and his team mapped which popular enzyme bits rely on each other to complete their tasks, the enzyme that binds iron and the one connecting DNA pieces ended up in the center of their chart. This central status means that the surrounding enzymes needed these core two to function — which in turn suggests that they’re most likely the parts to show up first on Earth’s timeline. By being some of the first enzymes to power chemical reactions, they provide the byproducts necessary for the other, later enzymes to do their own independent tasks.

Early conditions on Earth provide convincing support for the team’s conclusions. For example, geologists think that early oceans were full of iron — so it makes sense that a core enzyme works with the element, Nanda says. As oceans lost the metal, life had to learn to work with other metals, like copper and nickel: materials that show up on the periphery of the team’s enzyme map.

To see if these enzyme snippets could perform on their own, Nanda and his team assembled and tested them. “I was skeptical at the beginning that this would work,” Nanda says. “I thought we’d make enzymes and have to coddle them to get them to work.”

Instead, they seem to be durable and competent at moving electrons all alone in simulated lab settings. In a way, this makes sense, Nanda says: “If you’re a small peptide on a rocky surface in the early ocean, and you have no cell to protect you, and you have to be tough to survive.”

The team now thinks that today’s larger, complex enzymes — the full cars made from those universal nuts and bolts — evolved because life got more complex and the proteins had to communicate with more and more molecules.

If these most basic pieces are required for life to proceed, then researchers might find them while looking for life elsewhere. Maybe the final products of these actions won’t turn into discoveries of any life-forms resembling our plants, animals and humans, Nanda says. Rather, finding the building blocks could help researchers know what to look for when searching for life across the solar system.

For now, Nanda and his team plan to dive into the connectivity map they made and learn from those relationships.

“Each connection represents something that had to evolve for a new function, and each one is a choice nature made,” Nanda says. “There’s lots of data to mine.”